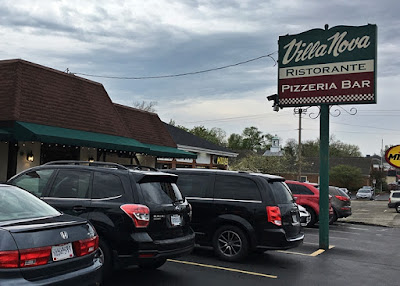 Company History: Forty years are in the books for this Colleli family creation.  Taking what had been the Vogue Lounge, Frank and Donna Colleli took two years to transform the building into the restaurant/bar space that exists today. Ever since then, a member or members of the Colleli family have run Villa Nova. When Frank passed away in 2014, his sons Frankie and John, as well as John's wife Meghan, took over operations, with their mother Donna dropping by to say hello to the restaurant's regulars on a regular basis. 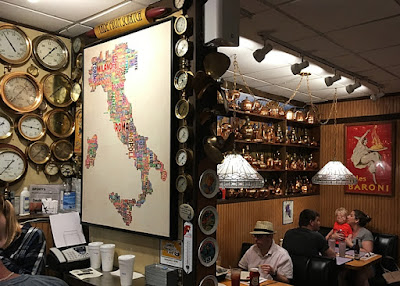 In some ways, it's impossible to comment on a Villa Nova pizza without commenting on the space itself, which has a personality all its own. For one thing, the space sports no windows at all, giving you a certain dark, hole-in-the-wall quality for both the restaurant and bar side. Adding to the quirkiness of the interior is original owner Frank's collection of teapots and pressure gauges, the latter inspired by his time in the Merchant Marines. While my time here was brief (I ordered my pizza to go), the space's unique nature made quite an impression.

Personal History: I've passed by many times, but have never ventured in...until this year. 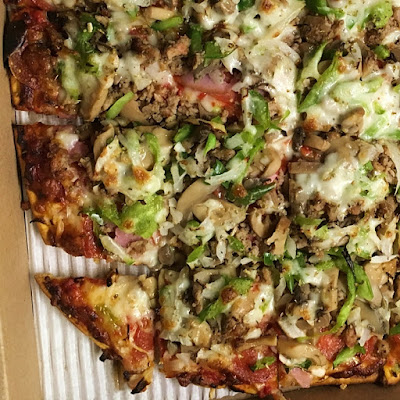 Pizza Thoughts: We went with the 7-Topping Deluxe and our first thought was "did we pick up a Pizza House "All The Way" pizza by mistake?"  The pies are remarkably similar, though as we went through our pie we noticed that the Villa Nova crust was just a touch sweeter and airy, the pie just slightly cheesier, and just a tiny bit less topped off in terms of toppings.

Cold Pizza Test: I'm learning Columbus-style pizzas are generally good right out of the refrigerator, and Villa Nova's is no exception.

Initial Verdict: We like Pizza House quite a bit, so we'll count as Villa Nova's as something of a fraternal twin pie wise, perfectly enjoyable when the mood strikes.  But at least in the near term, our next goal with Villa Nova is a dine-in experience to sample some of their familiar Italian dishes like Cacciatore or Lasagna. 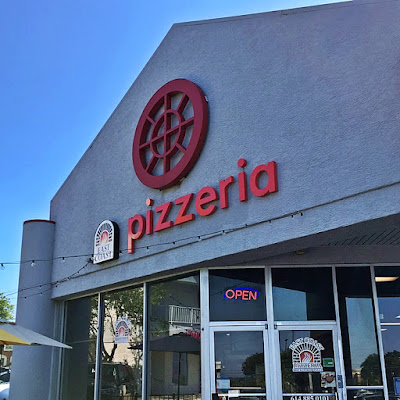 Company History: East Coast Pizzeria is a relative newcomer, opening up in the old Z Pizza location in April 2017. According to an article in This Week News, owner Colin Gerhard brings hand-tossed dough, a variety of sauces, and higher quality ingredients to his Graceland-area pizzeria. While there are a fair number of  seats within East Coast for dining in, a look behind the counter and the meticulously stacked boxes shows this is a place geared toward the takeout customer. 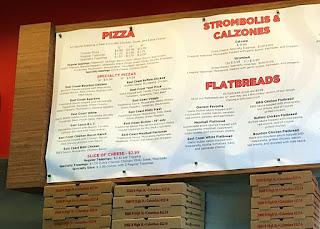 Personal History: My spouse and I have had their calzones before - the calzone itself was okay, but the tangy dipping sauce was an indication to us that we might enjoy their pizza even more. East Coast sports both a New York style and Sicilian style crusts, the latter of which we opted for on our next trip.

Pizza Thoughts: The gold-standard for Sicilian style pizza for us is Adriatico's, so East Coast's pie had a pretty stern bar to strive for.  As it turned out, their Sicilian style pie is pretty darn good, something of a slightly less greasy and slightly less gut-busting rendition of the campus favorite. The sausage is nicely crumbly, the vegetable toppings are uniquely slivered and diced up more finely than other pizzerias we've tried, and that tangy, zingy sauce we first experienced with the calzone. 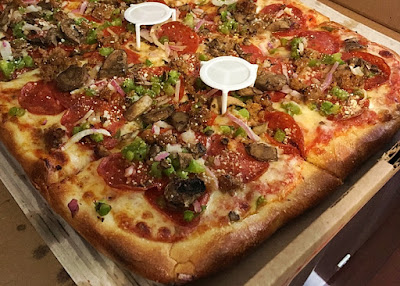 Cold Pizza Test: Again, another case of style somewhat dictating the pleasure of the experience, but for me, this pizza does better after warming up in the oven. The crust even held up quite well in the microwave, a method I don't really recommend for most leftover pizzas - just be judicious with your power settings and you'll be pretty pleased.

Initial Verdict: We'll probably always be partial to Adriatico's pies, but East Coast's version is right up there, a perfect substitute for those wanting a thicker-crust pizza but not wanting or having to travel to the campus area.  The pie also has us wanting to try of their thinner crust pizza renditions in the future.
Posted by Joe