From Indy to Columbus via Columbus: A Sweet Return Home

Let’s start up modestly with a little coffee shop action. The history behind the Village of Broad Ripple isn’t too unlike Columbus’s Clintonville or even Grandview Heights - established along the banks of the White River in 1836, the community was annexed into Indianapolis proper in 1922 and eventually transformed into a hip, artsy district with a big youth component due to its proximity to Butler University. 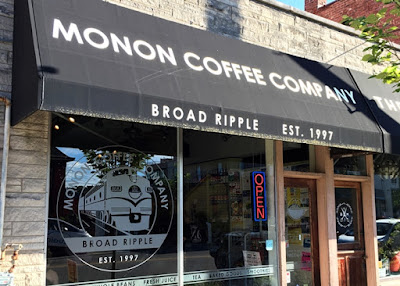 It is here where Monon Coffee has made its home for over 20 years. For us, it reminded us of a blend of the Grandview coffee - the longevity of Stauf’s, design elements of both Grandview Grind and Luck Bros Coffee, and the neighborhood-type feel if all three.
. 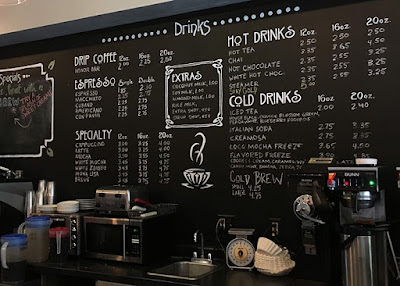 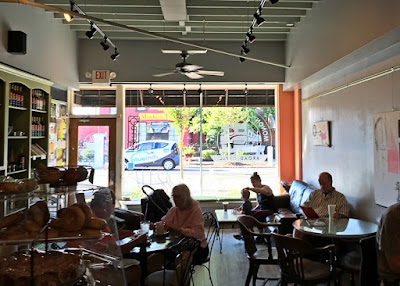 Monon has all the coffee drinks including some ones we hadn’t encountered before (the Creamosa espresso/Italian soda water blend). We wouldn’t normally take note of an iced coffee, but this one was one of the more delicious we’ve had, lacking the astringency that many similar versions sport. Add in some capably made baked goods, and all was good to get on the road. 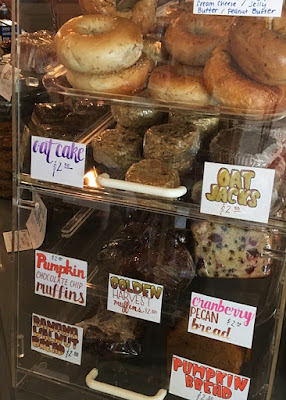 Jon Snow (as in the “Game of Thrones” novels and TV series) is not something you’d normally encounter on a restaurant menu, but that was one of the two items that set Ruth’s Cafe, located in the Nora neighborhood, apart from the usual diner fare. 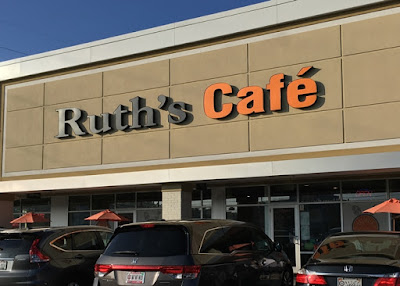 Until you look at the menu, however, the distinguishing features of Ruth's lie in the interior decor, which contains wildly decorated tables and chairs, equally mismatched coffee mugs, and a wide swath of media referencing food to farms to local sports. 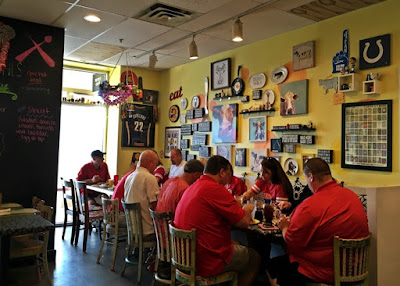 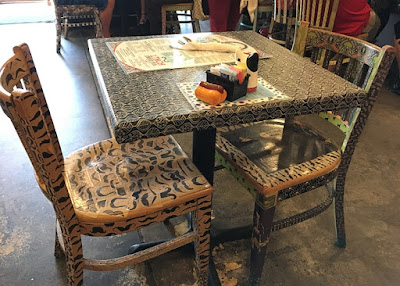 Ruth's menu also looks pretty similar to other diner establishments until you spot the two Norwegian dishes.  One, as alluded to above, lies in the Jon Snow (also known as "The Traitor), an Egg Benedict with Norwegian Potato Cakes (they can be ordered as a side item as well.) Ruth’s version is not unlike a hockey puck in size and more like mashed potatoes in consistency, versus the flatter and generally crispier editions we’ve sampled. Combined with a bowl of fruit, it made for a good blend of textures and flavor profiles. 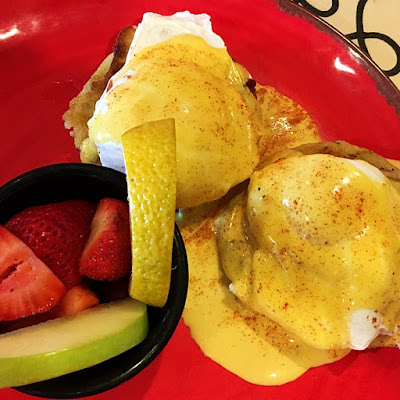 Ruth's other Norwegian dish in the Lefse, on the other hand, goes over the top on the sweet side. Coming in texture-wise between a French crepe and Latin American tortilla, the Lefse is generally filled with something sweet. In Ruth's case, the base model comes with cinnamon, sugar and butter, or you could go with fruit or, in my case, the over the top Nutella rendition, accompanied by sliced bananas, whipped cream, and chocolate syrup. 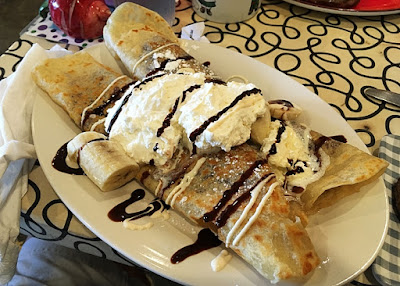 This hefty creation is a carb-lover's dream, and doubly so if you’re a big fan of Nutella (note: a side of something savory might be worthwhile to break up the dominant sweet profile.)

Ruth's Cafe
3443 E. 86th St (Google Maps)
Indianapolis, IN 46240
(317) 757-8006
Facebook     Instagram     Twitter     Website
.
Finally, our encounter with the jerks was a Columbus affair...Columbus, Indiana, that is.  Tipped off a couple years ago by my fellow blogger colleague CMH Gourmand, a visit to Zaharakos Ice Cream Parlor in the downtown area is like taking a trip to your favorite ice cream parlor from the turn of the 20th century, and we couldn't possibly pass the chance up as we slow boated our way back home. 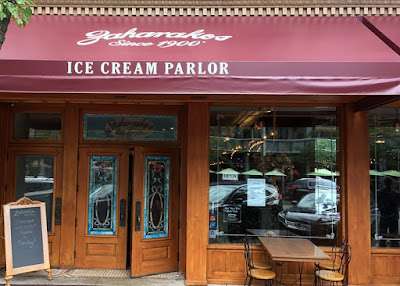 Opened in 1900 by the Zaharako Brothers, the parlor operated under the name of The Greeks until being changed to Zaharakos in 1950s. The operation remained a family operation until 2006, when the last remaining Zaharako Lew passed away. The parlor eventually closed a few months later with ownership passing to a local preservation group. A year later, local businessman Tony Moravec bought the parlor and undertook a two year restoration effort to restore the shop to its former glory. 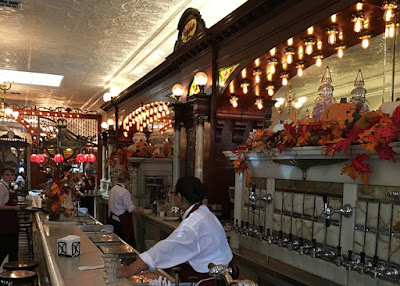 Now nearly a decade after its grand reopening, the newly refurbished Zaharakos has re-established itself as a must visit for the ice cream aficionado. Your attention on shiny wood floors and parlor style seating is soon drawn away by the huge wooden mirrored bar, bedecked with light bulbs all sorts of ice cream and soda jerk equipment on the other side.

Tin plate ceilings, decorative light fixtures, and the sounds of electronic organ music draw your attention to the back of the space and the spectacular Welte Style 3 Cottage Orchestrion (an instrument sold by Lew Zaharakos to help pay for his medical expenses in 2006 and Moravec managed to bring back after an extended effort to track down the buyer and negotiate its return.) 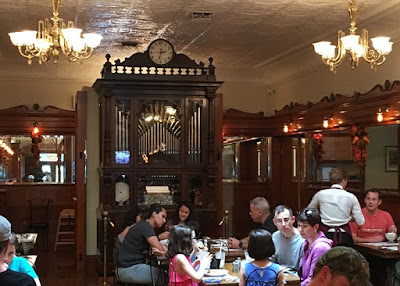 Further exploration reveals that the spaces around and next to the main dining area hold more eye candy for the visitor. Zaharakos essentially has also been transformed into something of a museum, with most of the items, including antique soda jerks and mechanical music creations of all types, being housed in the adjacent room. 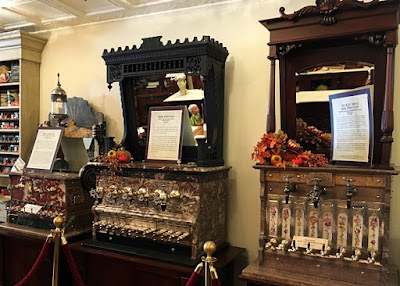 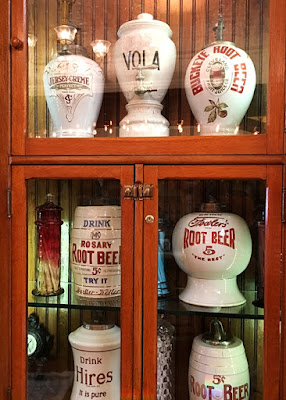 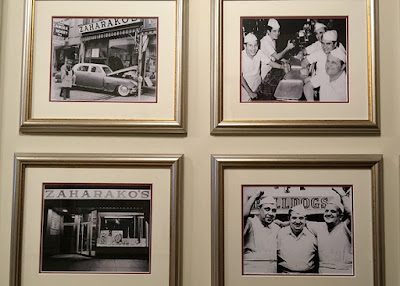 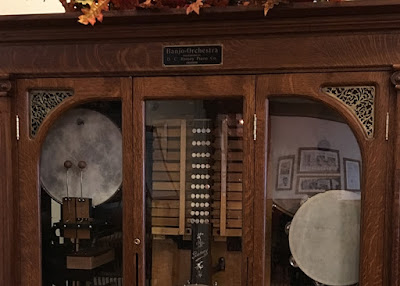 Zaharakos isn’t too unlike Bexley’s Johnson’s Real Ice Cream in terms of having a basic non-ice cream lunch items available for diners. These could be bland throwaways, but we found the burger and the Gom Sandwich (a Grilled Cheese with Sloppy Joe filling - wish I had thought of this as a younger lad) to be above our expectations. 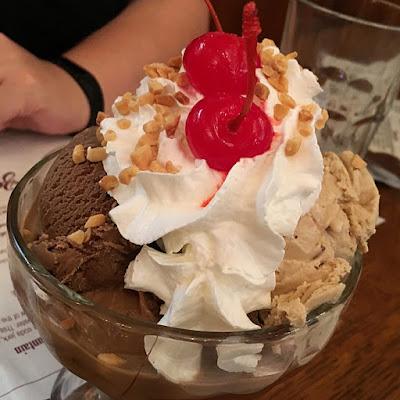 .In many ways, the ice cream itself (for us, as classic a two scoop sundae as you can imagine) serves as a yin to the yang of the Zaharakos’s history and venue itself. The former sustains the latter, and the latter enhances the experience of enjoying the former. If either falls out of sync, the magic that is Zaharakos starts to fade, and based on this memorable visit, this ain't happening anytime soon.