Indy In Threes: Beer and Wine and a Voice Divine

Indianapolis, the state capital of Indiana, has been a city that we have dabbled in on previous journeys, but have rarely dug in as deeply as we might like. With our current status of having to having to stick a little closer to home due to job-related duties, easy weekend jaunts to places like Indy (in this case, a mere straight three hours west on I-70) have a very high desirability factor.

This first post of this mini-series is composed of highlights, but only in the sense that these three destinations either inspired our trip to Indiana's capital city in the first place or stuck out in our minds immediately as definite must visits. As it turned out, we found much more to keep us entertained during our stay, with the realization that we’ve only begun to scratch the surface of things to do here.

Perhaps the first Indiana brewery we knew of collectively was Sun King, with brews like their Osiris Pale Ale acting as early muling candidates back to Ohio. With their 10th anniversary on the horizon for next year, this brewery has not stood idly around, expanding their profile into the distilling world with a newly opened facility in Carmel, a booming city of just over 90,000 folks located to the north of Indy. 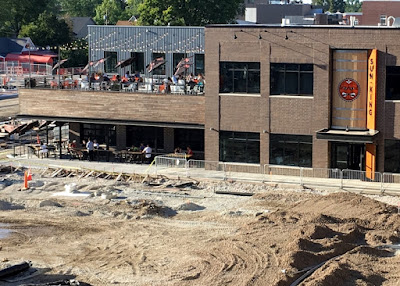 Set alongside the Monon Trail, Sun King's new spirits facility is one of the anchor tenants of this city's new Midtown development. The view from one of the newly constructed parking garages across the way reveals that much work is still left to do to get the area fully built out. 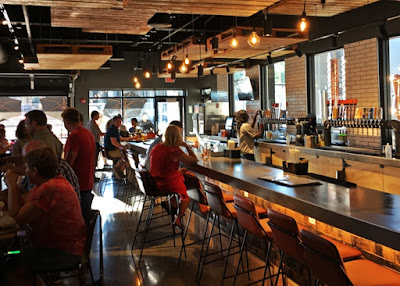 Inside, Sun King features a number of tap areas and upstairs patio seating. In a little twist to the restaurant side of things (and a big change from the brewery's selling of Hot Pockets out of its original downtown taproom to stay legal), the brewery offers a food court style setup with La Margarita Mexican, brick-oven pizza from Pi Indy, and Indiana comfort fare from Fox Gardin Kitchen and Ale. 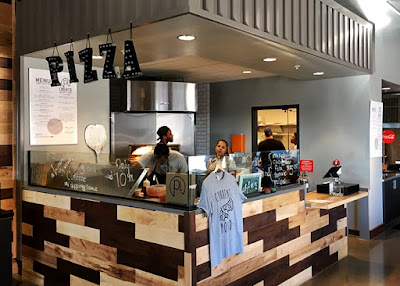 For our meal, we went with what turned out to be excellent deli fare of Smoking Goose’s Oca. Both sandwiches were quite tasty, with our favorite being the Nolan, featuring a South African-style Boerewors Sausage with Creamed Corn, Tomato Relish and Fried Onions, as well as the side order of Gin-Brined Olives with Bleu Cheese (with plenty of gin inside our container.) 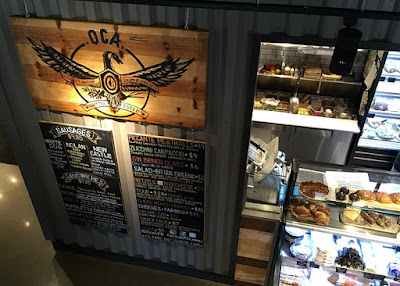 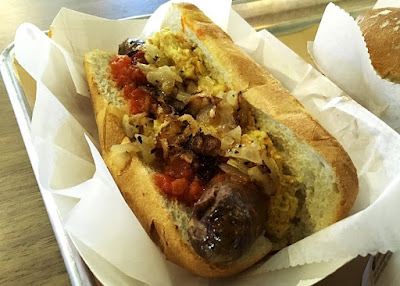 The distillery side is still in development. However, the brewery has teamed up with other local distillers to bring you a wide array of the area's best spirits. At $12, a flight of four spirits (generously poured, as it turned out) is the perfect introduction, with special kudos going to the 8th Day Distillery's Dancehall Panic Jamaican-style Rum and the Copper & Kings' Cr&ftwork Lonesome Dove Barrel-Aged Brandy. Of course, we couldn't pass up a couple brews as well, and their Sun King's sours were on point on this night. 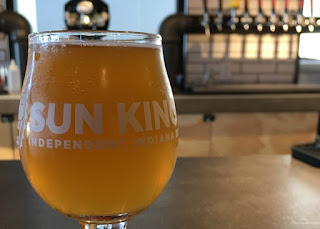 No one thinks of Indiana or any Midwest state necessarily as wine destinations, but roughly an hour south of Indy lies the confines of Oliver Winery, a destination that can hold its own with wineries in more famous wine-growing regions. 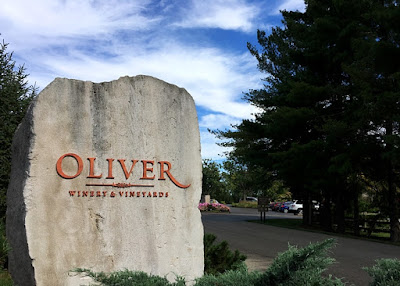 My first experience with Oliver came through what has become a Christmas time tradition I've developed of bringing back a little Midwest back with me home to my relatives Several years ago, this turned out to be a sampling of the sweeter wines and grape juices of the Great Lakes region.

However, I soon found out that Ohio's quirky laws ruled out shipments from the state's wineries to California. Sight unseen and taste untasted, I took a chance on Oliver and it turned out their wares were received enthusiastically back on the West Coast. As time has gone on, we've come to know this winery in Bloomington does a great job their Great Lakes and more traditional varietal wines. 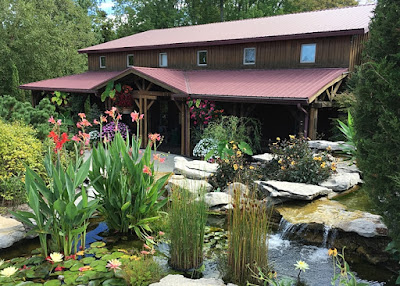 Even though this part of Southern Indiana consists of hilly, forested lands, the Oliver Winery estate proves to be more picturesque and prettier than one might expect. Having traveled and lived in and around the various wine areas of California, this setup would hold its own if it were transported to the West Coast. 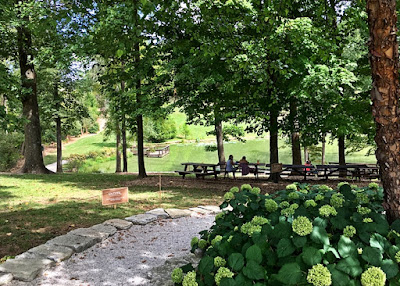 Oliver has its winery-branded wines that can be found in several states (including Ohio), but their specialty Creekbend line of wines can only be bought at the tasting room.  For a modest $5, you can have a tasting of eight of Oliver's offerings, which include ciders and meads and with only a select few off-limits for the general tasting. 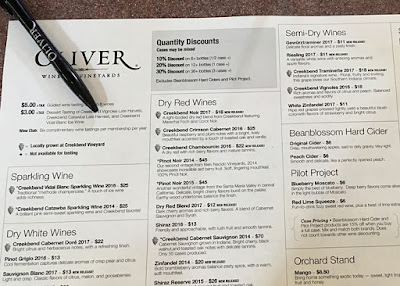 Perhaps the best endorsement we can give here is, that despite our general leanings toward craft beer and spirits, we ended up grabbing six bottles (Oliver offers a variety of discounts if you buy in multiples) of various wines to take home. 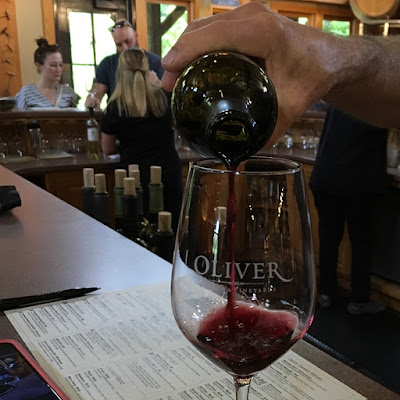 Finally, our "divine voice" on this visit was represented by bluegrass/country star Alison Krauss, who performed to a full house at Butler University's Clowes Memorial Hall. On this solo tour, she was accompanied by members of her longtime band Union Station, a Sidney and Suzanne Cox from the famed Cox Family bluegrass ensemble, and a bevy of talented sidemen.

On the weekend of our visit, Indianapolis hosted some fairly substantial musical talent. Most of the younger crowd probably dropped by Lucas Oil Stadium to catch Taylor Swift, or perhaps even Jason Isbell and The 400 Unit at White River State Park. The "Matlock" crowd (as Krauss herself joked to the audience to much laughter) were most likely at The Palladium with Chris Isaak or holding court right here with us on this Saturday night.

While a few songs from her latest mostly covers "Windy City" album made it onto the song list (Roger Miller's "River In The Rain" and Willie Nelson's "I Never Cared For You"), the songs covered the gamut from traditional/gospel numbers ("Down To The River to Pray" and the encore closer "It Is Well With My Soul") to Krauss's most familiar songs ("The Lucky One" and her version of the oft-covered "When You Say Nothing At All"). The multiple-winning singer's voice proved to be on this night in fine form, with her band transitioning smoothly from full band accompaniment to a capella and everything in between. 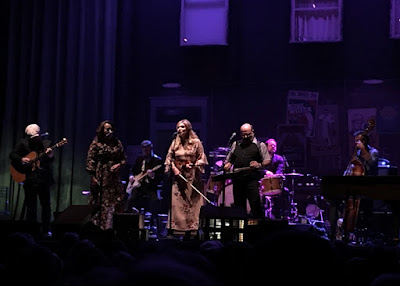 As a newcomer to Krauss's work, I enjoyed this show quite a bit; as for my spouse, who has long been a fan, this was something of bucket list moment and she was not disappointed in the least. I suspect that her feelings mirrored the vast majority of enthusiastic and reverential concert-goers who had gathered on this night - to borrow from John Hartford composition also performed on this night, Alison Krauss and her band mates were for that hour-and-a-half like the rivers of memory and gentle on our minds.