No Toying Around: Ho-Toy Restaurant

Chinese-American cuisine has, at least in my household, gained an increasingly important role at the family table over time. I was introduced mainly to the somewhat compact sweet side of the cuisine when my family moved to San Francisco, when boxes full of Custard Tarts or Sesame Balls would occasionally make their way home with my parents and grandparents.  Also memorable were the Haw Flakes, which reminded me of a far tastier rendition of a Communion wafer - my Grandpa would sometimes drive us into Chinatown after a day of fishing at the old Municipal Pier to grab a multi-pack, much to the joy of me and my siblings..

Later on, trays of Chinese-American cuisine standards like Sweet & Sour Pork, Chinese Fried Rice and Chow Mein would make appearances side-by-side by the Filipino standards I grew up with, mainly as a way to ease the cooking load off my elders as well as guaranteeing everyone got more than enough food.  After all, it would be a shame if the foam take-away trays stored conveniently underneath the serving tables ended up unused.

Nowadays, I don't actively seek out Chinese-American restaurants on a regular basis, but I'll get the occasional random craving for it.  However, my move to Columbus revealed that something that I thought I had conquered in the pursuit of tasty treats still needed some work. 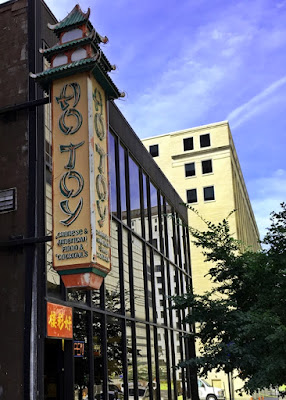 I admit I got bad vibes when I first spied the old-school neon sign of Ho-Toy.  Visions of gloppy, gummy-sweet dishes and gastric growling from a grudging gut kept me away, even though I would almost always get exactly that when I gave in to my cravings (and a little bit of convenience) and stopped by the (now defunct) Lee's Chinese Kitchen just a half-block away instead.

Finally, a "why the heck not - let's go for lunch" suggestion by my fellow blogger and colleague CMH Gourmand got me in through the doors into its faded glory interior for the first time ever several weeks ago (for the report on our meet up, please check out his blogpost here.) 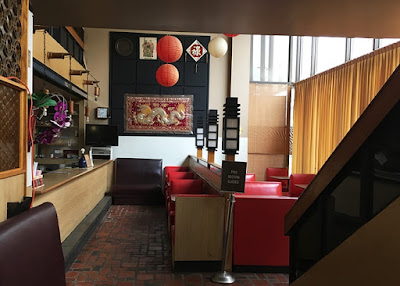 For those who don't click on the link, the short version is not only did we both survive, we thought the meal was actually pretty decent.  I could've left it at that, but hearing that the current owners were Thai and considering all the meals that I could've had at Ho-Toy instead of its long-time neighbor, I figured I owed this eatery a couple more meals at the minimum. 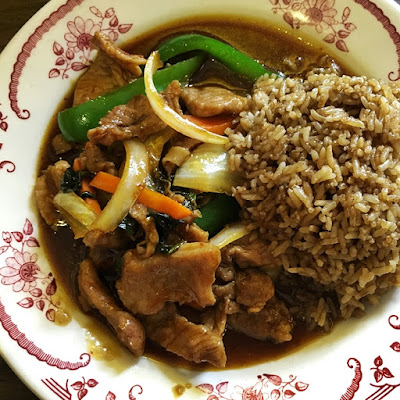 The following dining experiences for me were similar - the food here at Ho Toy isn't wow-inducing or impresses you with its complexity. Nor is there any "secret menu" that will delight the culinary explorers out there.  But what dishes are served here are competently made (no gloppy meat, soggy vegetables, lack of seasoning, or over-salting) and make for a decent meal. And the lady who always seems to take orders is one of the nicest persons I've had wait on me.

The two Thai dishes I ordered (the Pad Prik King and the Gang Pedt curry) were ordered "Thai Spicy" but weren't as mouth burning as they could've been, which all considered is probably a good thing considering that most people dining here are working types.  The sides are fairly nice too, from that intriguing fried rice to the basic egg roll. On the other hand, the Crispy Noodle side is exactly that (fried noodles) that is better as a texture garnish than a true finger-food snack. 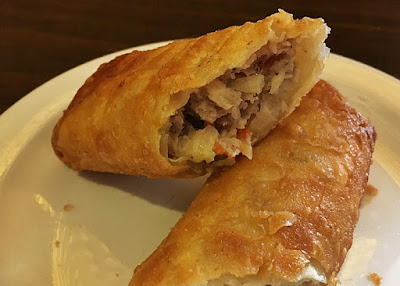 In reality, a blog post that is sort of positive like this one isn't going to send droves of people to Ho-Toy, and that's probably not a bad thing - a slow but steady stream of diners and take out business seems to be enough to keep this close to 60-year-old eatery chugging along. In addition, I'm not sure the folks who work here could handle the hordes of workers that crowd the other mainly chain restaurants nearby.

On the other hand, a place like this is probably negative review proof either, or for that matter, competition proof (L. Ginger, from the folks at Blue Ginger, has opened up in the old Lee's China Kitchen to mostly positive reviews and will probably draw its share of diners.)  Ho-Toy has almost certainly reached a status where, outside of a truly awful health department report or a crisis with ownership, its existence is most likely dependent on how long its current owners want to crank out the food.

Knowing the tides of change that are afoot in the downtown area, I imagine Ho-Toy will then be a candidate for the next volume of those "Lost Restaurants in Central Ohio" books. It also reminded reminded me about the saying about not judging a book by its cover, and added a little dose of old Columbus history to boot.