Founded in 1820, Indianapolis isn't too much younger than its fellow capital city of Columbus, which was established in 1812. In other words, Indy has its share of the old.

But in this second of four Indianapolis-related blogposts, the meaning of old is stretched out a bit, from the oldskool (a sleek, modern eatery that has earned "Best of" honors) to the old school (a former facility to treat mentally ill patients turned museum) to the just plain ol' old (antiques in an antique building.) 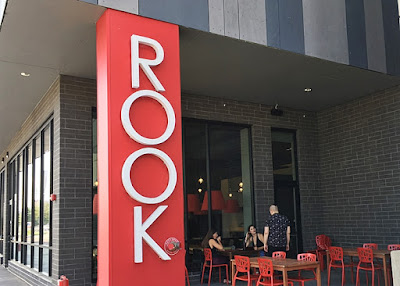 For me, there's a certain hip coolness that emerges when sleek interior space meets up with a background soundtrack consisting of oldskool hip-hop. This was especially evident at places like San Diego's Mikkeller Brewing, a craft brewery that flaunts that vibe proudly. On our recent travels, this honor fell to the sleek interior (including posters of hip-hop pioneers like the Wu-Tang Clan, Dr. Dre, and Tupac Shakur) and background music of Rook, located in the Fletcher Place area of downtown Indy. 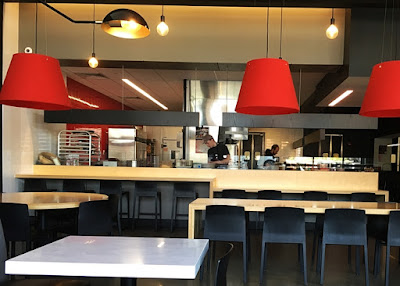 Opened in 2016, Rook advertises itself as Asian-inspired street fare with a Filipino touch, unsurprising with Chef Carlos Salazar's roots (Salazar and his family emigrated to the states when he was 10 years old.) In some ways, Rook treads similar territory as Columbus's Bonifacio but aims slightly wider and more fancifully, offering unique takes on items like Filipino Spaghetti (the dinner version is a sandwich with mixes in the very non-traditional Seared Foie Gras and chili sauce with more traditional ingredients between slices of Milk Bread) and a Sisig that features Salmon Belly as well as Salmon Skin Chicharrons instead of pork. 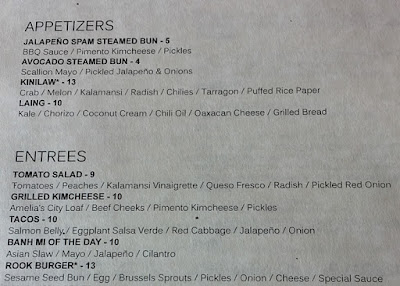 Sadly, we couldn't make it for dinner (next time, as they say), so we decided to make it a lunch date instead.  Rook's lunch menu isn't quite as whimsical as its dinner counterpart, but offers some intriguing sounding items like Grilled Kimcheese (beef cheeks, pimento kimcheese and pickles on local bakery Amelia's sourdough City Loaf) and Hiyashi Chuka, Rook's take on the chilled Japanese ramen dish featuring shrimp, Spam, cherry tomatoes, squash and egg. 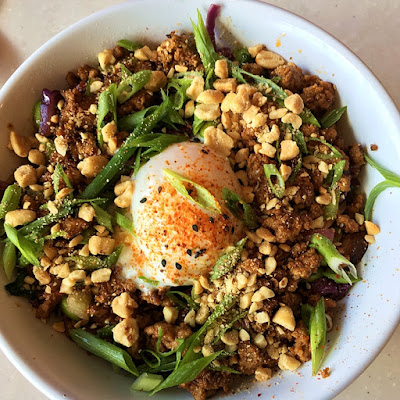 I thought hard about the lunchtime version of Filipino Spaghetti (sans Foie Gras, but with the more traditional Hot Dogs), but thought it might be a bit spendy at $15. Instead, I went with something I hadn't had in awhile in their Karaage Rice Bowl. It may have been one of the more conventional takes on the menu, but it did the trick as a relatively healthy mix of tastes and textures with its crispy fried chicken thigh cubes, nicely spicy Fresno chilies, and a blend of onion, mint, cilantro, basil and an over easy egg.

The healthy and tasty description also applied to my spouse's Dan Dan Noodles, which had plenty of not-so-traditional ingredients like edamame and Shiitake mushrooms. Additional proteins can be added for a few bucks, but the base version works if you're just looking for a tummy filler. 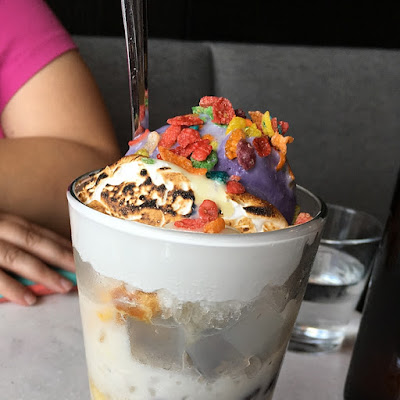 Of course, we couldn't not sample something Filipino while we were here, and their Halo Halo for dessert served that purpose quite well. The fun thing with Halo Halo (literal translation Mix Mix) is you can blend in any number of add-ins and it all comes out all good. My childhood memories were slightly pining the lack of Kaong (sugar palm fruit) and Macapuno Strings (Coconut Sport), but in reality this version was perfectly fine, blending ice fluff, with Ube ice cream, Fruity Pebbles, Nata de Coco (Coconut Jelly), sweet beans, flan, jackfruit and lemongrass milk. 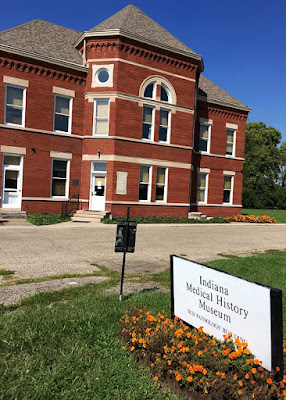 Those who have read my blog for awhile know that my spouse and I have a taste for the unique and unusual. For our "old school" portion of this post, we visited the building that houses Indiana Medical History Museum, which features its unique and fascinating past.

Residing on the once sprawling complex of the Central Indiana Hospital for the Insane (which started operations in 1848) the museum resides in the facility's former pathology building. By the time the building itself, which was considered cutting edge for its era, opened in 1895, the facility as a whole had changed its name to the less alarming Central State Hospital. 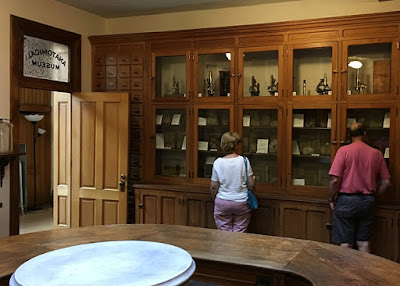 The museum documents the facility's role in expanding the field of Psychiatric Medicine throughout its decades of operation. Perhaps the most striking thing you realize as the tour unfolds is that many of the items of the building were essentially left as is when the facility was finally closed in 1994, from chemical containers on storage shelves, actual laboratory equipment left on counters, actual hand-transcribed medical autopsy records (because of privacy laws, we were not allowed to take photographs in that room) and much more. 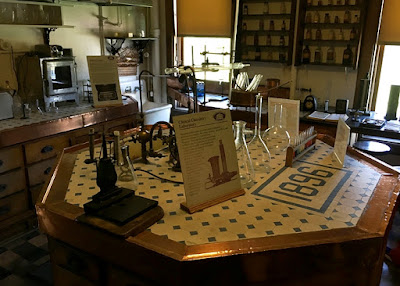 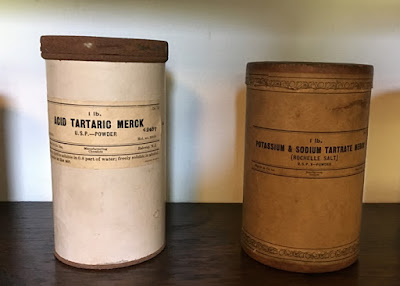 Additional enhancement work has been performed over the years to handle visitors, including the original disinfecting of surfaces and the regular replacement of fluid in tissue display containers. Other spaces received enhancement of what already existed with other exhibits or preservation efforts.

A prime example of the latter lies in the amphitheater, where the autopsies of people afflicted with mental illnesses would regularly take place in front of students and other medical specialists sent here to learn about the field. Here, sponsorship placards can be seen on some of the shiny wooden chairs inside, and, as the docent pointed out, the covered up floor drain underneath the podium/table where she stood at and where bodies were regularly cut open and examined for those in attendance to learn (fainting spells were not uncommon, we were told.) 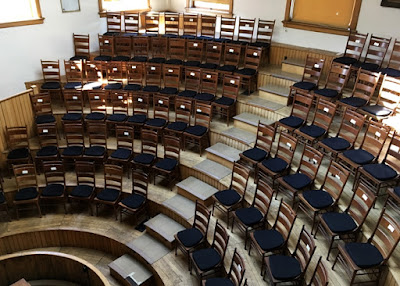 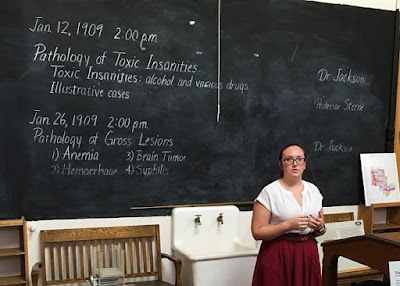 There is a lot to absorb on the roughly one-hour-long tour of the museum, but rest assured it is well worth the modest admission fee and provides a fascinating perspective of how much the field of mental illness and brain injury has evolved over the years. Also worth a visit is the Medicinal Garden, which resides next door to the Museum - this free exhibit features over 90 such trees and plants as well as information on their uses in medical treatment over the years. 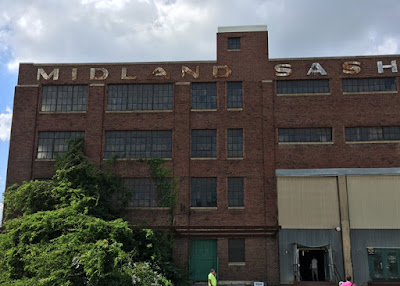 Located across the I-70 freeway from Lockerbie Square, the Midland Arts and Antiques Mall is one of the most popular such destinations in the city.

This four story brick building, which dates back to 1912, was once home to the Midland Sash and Door Company. Currently, over 150 antique vendors lie scattered throughout the bottom two of the four floors. For Ohio antique hunters, the building is pretty much a larger version of Lancaster's The Olde Shoe Factory and Storage mall. 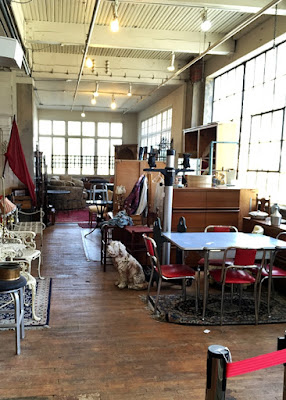 For the most part, the items available here seemed to run the gamut (furniture was in plentiful supply), with most things seeming coming from the 1930s through the 1980s. There is no food court here (a random food truck does make an appearance), and the advice to stay hydrated posted at the entrance of the mall is one to heed, especially on warmer days and you decide to wander up to the second level.

I always seem to notice that one item which seems over-represented when compared to other stores we've visited, and here the winner was bowling balls.  But as with almost any antique store of note, there's a whole cadre of unique items here at Midland to garner your attention. 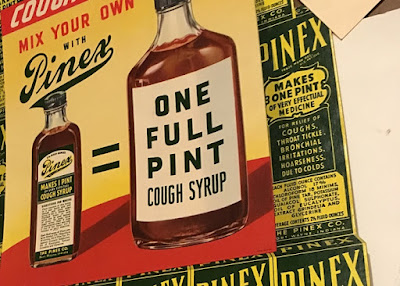 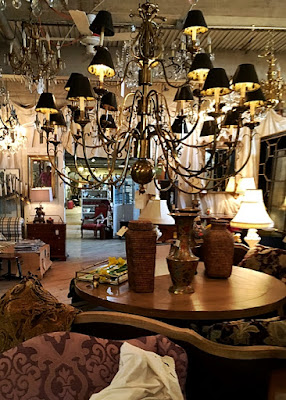 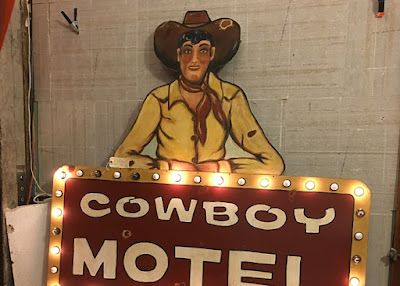 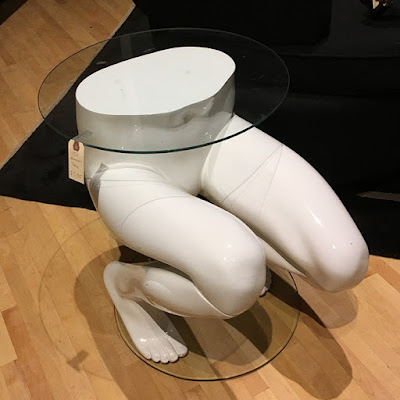