This first of this two part "Ohio Pizza Cage Match" mini-series of blog posts started off by looking at two area locals, both long-time purveyors of the Columbus-style pizza in Donatos and Massey's (for a look at that previous post, please take a look at this link.)

Their opponents, if you will, are the out-of-towners, originating from opposite ends of Interstate 75 on the west side of the state and sporting decidedly different styles of pizza.  While they don't have the combined experience of their Columbus counterparts, they do bring it in terms of enjoyable pies. 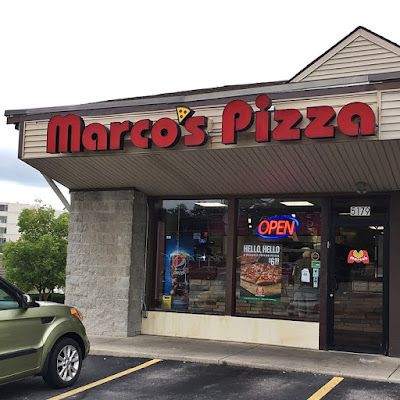 Company History: Founded by Italian immigrant Pasquale “Pat” Giammarco, Marco's was the result of Giammarco's experience with pizza making at his parents' restaurant in Dearborn, Michigan. After his family moved to Toledo, Ohio, Giammarco opened up the first Marco's in 1978 in Oregon, Ohio.

In 2002, restaurant veteran Jack Butorac happened to visit Marco's on a tour of eateries poised for growth - despite the inconsistent branding he saw in Marco's 120+ stores at the time, he found the pizza both consistent and delicious at each location he visited. Butorac worked with Giammarco to bring the brand to the national level, and currently the pizzeria is one of the hottest franchises in the nation as it celebrates its 40th anniversary, aiming for 1,500 locations by 2020.

Personal History: My spouse has had a long history with Marco's, having worked for a summer at her hometown location and consuming dozens of Marco's pizzas in her years. Strangely enough, she hasn't had a pie from Marco's since I moved out here; our experience has been strictly with their sub sandwiches, one of our favorite late-night eats when we're don't want to think about things too hard. 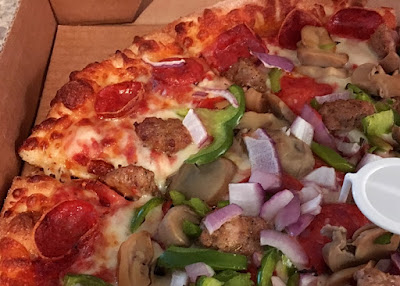 Pizza Thoughts: We ordered the Deluxe, which comes with the big five toppings in my books (pepperoni, sausage, green peppers, onions and mushrooms).  The Tuscan-style crust is very appealing, sporting some nice, chewy bones for later chewing (we do enjoy their bread sticks as well.) In addition, there's a nice amount of cheese (Marco's uses a base three-cheese blend) and the sauce sports a nice spicy tang, which is my spouse's favorite thing about their pies and something I prefer also. Marco's does seem to use canned mushrooms, which may or may not be a negative to you.


Cold Pizza Test: Marco's is one of those pizzas that does fine both heated up in the oven or straight out of the fridge cold, so I'm saying personal preference rules here.

Initial Verdict: My spouse obviously has a lifelong relationship with this pizzeria, and I must say their pie is pretty good for what has become one of the biggest chain pizzas in the nation. I do wonder how that consistency that Butorac found back in 2002 is holding up - one of our more interesting sightings on my move out 6 years ago was a Marco's location in the Oklahoma City area, a sighting which caught even my spouse by surprise. We may have to test that aspect out at a location outside the state of Ohio in the future. 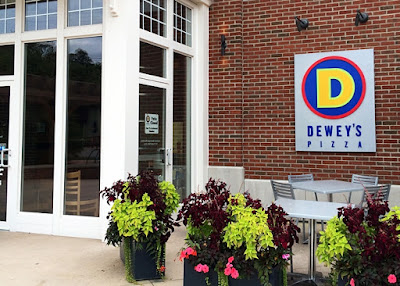 Company History: Even though Dewey's Pizza opened up in the Cincinnati area with its first store in 1998, Dewey's Pizza could be said to have started in Central Ohio via Seattle. Founder Andrew DeWitt graduated from Denison University in Granville, and while pursuing his musical ambitions in Seattle, he stumbled upon his previously unknown passion for crafting pizza, a passion he took back to the Midwest. Currently, Dewey's now sports 25 total locations in the three largest Ohio metro areas as well as St. Louis and Kansas City.

Personal History: We've had experience with Dewey's locations in Grandview and Worthington (a third location in the Columbus area also exists in Dublin.) We've rarely had Dewey's as a takeout pizza, mainly because the dine-in experience is one of the nicer around for a pizza place, with a good selection of craft beer and a guaranteed show before grabbing your take out pizza/waiting for a table as workers toss dough and prepare your pies behind glass windows. 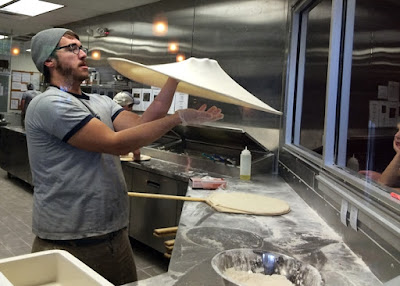 Pizza Thoughts: Dewey's base pizza is in the general New York style realm, but sports an airier and lighter crust (gluten-free is also available) than most. Their slices are fairly floppy, and the leftover bones remind me a bit of standard bread sticks.  Toppings are ample and well-balanced, with a sauce seems to cut the middle ground between sweet and spicy.

The half-and-half option is a great way to sample their specialty pies like their Edgar Allen Poe (an olive oil base, mozzarella, goat and fontina cheeses, mushrooms, roasted garlic, Kalamata olives with tomatoes and parsley added post-bake) and the Dr. Dre (another olive oil base pizza with mozzarella, green peppers, red onions, bacon, chicken, house-pickled jalapeños, and tomatoes and ranch added post-bake.)

Cold Pizza Test: Dewey's pies I think suffer slightly as a cold pizza because of that crust; I'll eat it, but I definitely prefer warming up the leftover slices, and preferably with a conventional or toaster oven to add a little crisp to the crust.

Initial Verdict: For me, Dewey's is in a much different pie than our other cage match participants, residing more in the gourmet class of pizzas that we've enjoyed like Harvest, Leone's, and Forno.  It also is a pie which we far prefer on a dine-in basis versus takeout because of the unique aspects mentioned above. Like its class counterparts, however, it is a more higher-priced proposition, so we think of it more as a dinner date pie versus a pie I'd seek out to feed the masses.
Posted by Joe