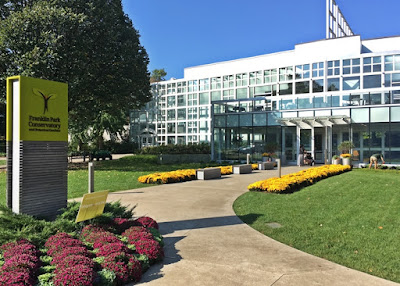 The Franklin Park Conservatory shares similarities with its Bay Area counterpart mentioned above: both of these beautiful, Victorian-styled structures were birthed in the late 19th century. Columbus's rendition, which was modeled on the glass palace featured at Chicago's Columbian Exposition, opened to wide acclaim and popularity with the public in 1895.

Columbus's conservatory underwent both an extensive renovation and expansion roughly 90 years later in preparation for the city's recognition of the city's namesake - explorer Christopher Columbus and the 500th anniversary of his journey to North America.  The result, the AmeriFlora '92, used horticulture as the centerpiece in a multi-month event to commemorate the journey, utilizing both the conservatory and the surrounding parkland to host exhibits and visitors.

AmeriFlora also had goals of boosting both the local economy and raising the profile of Columbus on an international level. Despite considerable pomp and circumstance (the opening ceremony featured a whole host of dignitaries, including comedian Bob Hope and President George H.W. Bush and the First Lady Barbara), AmeriFlora '92 fell short of these latter goals, but left behind a conservatory that has evolved into a more special destination in the years since. 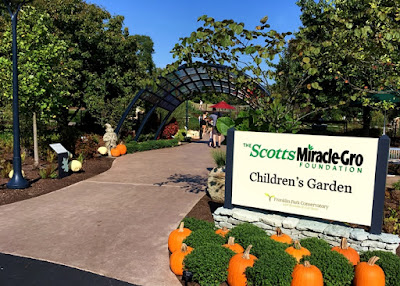 A prime example of this is the conservatory's latest arrival, The Scotts Miracle-Gro Foundation Children's Garden. Opened to the public May of this year, the garden provides a sneaky yet fun way for both kids and kids-at-heart to connect with nature. 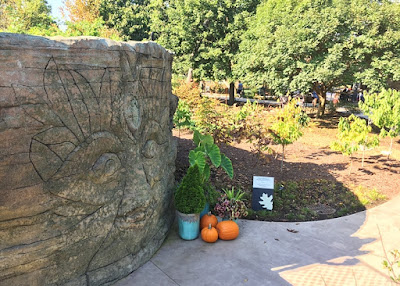 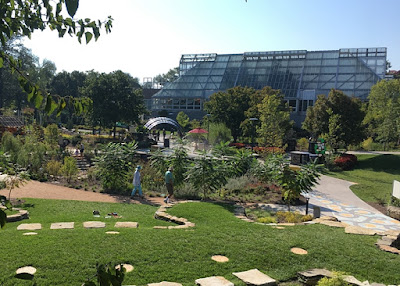 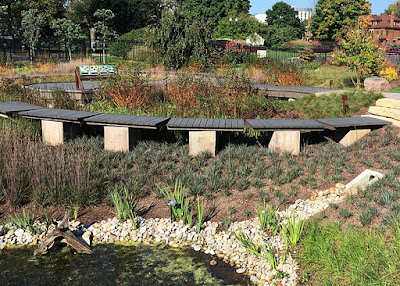 On my stroll through the 13 distinct areas in this two-acre park, gaggles of children were treating the park's features as they would any regular playground, jumping on nets, climbing on bridges, or running into or around structures, many of them Halloween-themed. But lest you think it's all about play, ample opportunities exist for all visitors to either learn a thing or three with educational programs and informational displays... 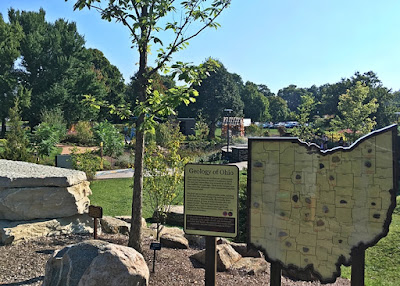 ...or express their artistic creativity. I remember the Pythagoras Puzzle Game giving me hours of fun as a kid, and a combination of water, surface tension, and foam shapes gave me and others the chance to create whatever mythical creatures and other interesting constructs. 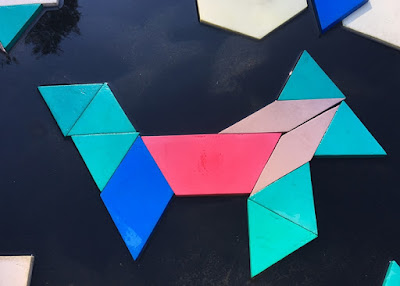 Of course, there's the conservatory itself, which features several sections containing biomes encountered throughout the world . Featuring over 400 different species of plants, the space includes the John F. Wolfe Palm House and the connecting Dorothy M. Davis Showhouse, the oldest structures within the current conservatory, as well as animal-themed topiaries, one of the current Conservatory seasonal exhibits, lurking among the manicured gardenscapes. 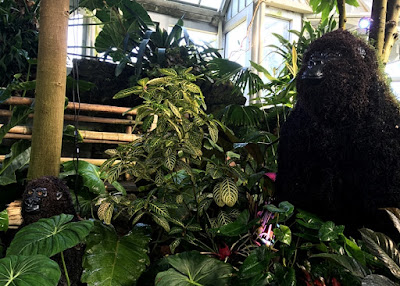 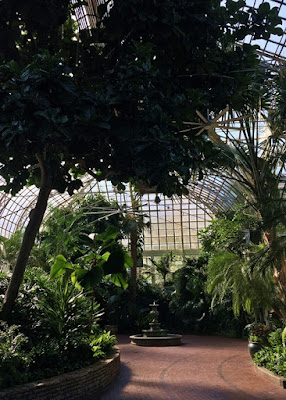 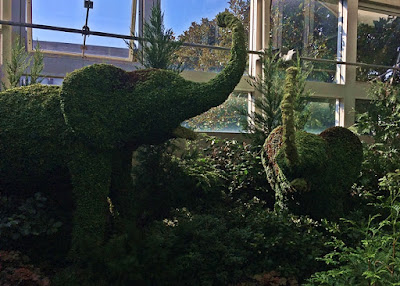 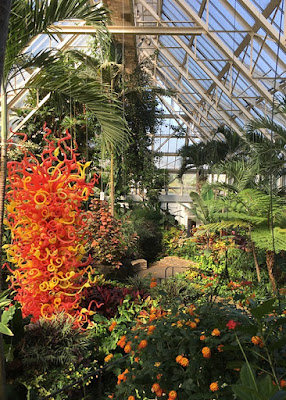 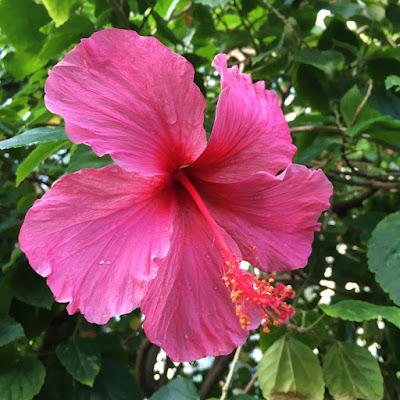 Amidst the buildings, you'll find quite a few outdoor and indoor spaces which hold more visual treats. Unsurprisingly, a couple more of the Conservatory's seasonal exhibitions (Bonsai Trees and Harvest Blooms) played a large part in filling these spaces out. 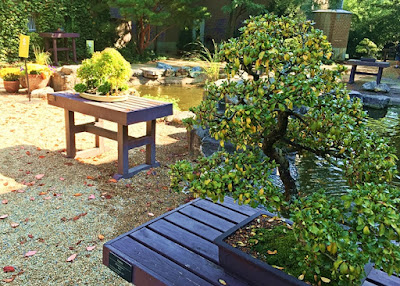 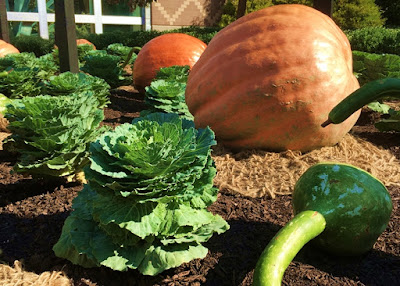 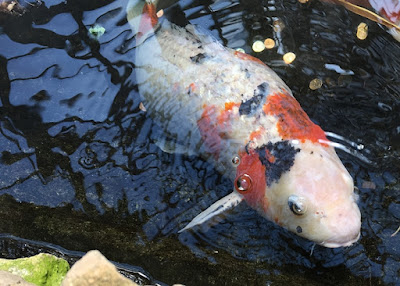 Just outside the Palm House is the Grand Mallway, which includes the striking NavStar structure as well as numerous evergreen shrubs and beds of perennials. 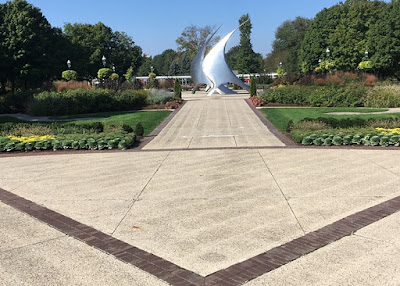 At the end of the Mallway, more topiaries held court, in the form of dozens of fabulous flamingos. 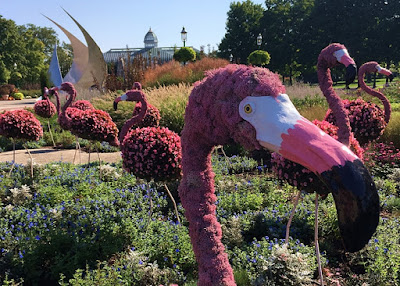 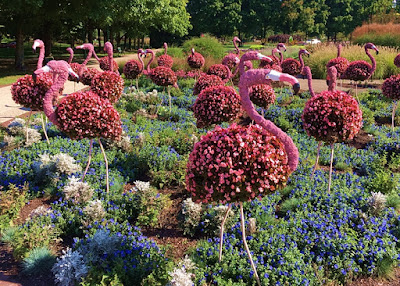 Throughout the facility, the art of renowned glass artist Dave Chihuly were scattered about, often in such a way where it blended in seamlessly with its surrounding landscape, such as these green clumps of glass grass in a desert setting. 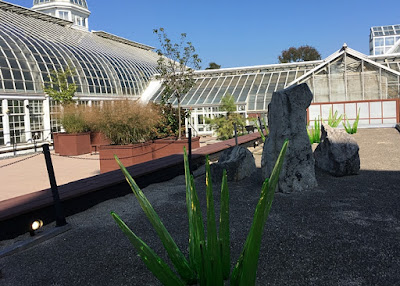 The arrival of autumn meant that certain things like the seasonal "Blooms and Butterflies" exhibit and the Community Garden Campus had either ended or reached the end of their run for this year, and many of the current exhibits at the Conservatory are due to end of October. But don't think this means that the Conservatory closes up shop for the winter - the popular "Conservatory Aglow" adds Christmas lights and decor throughout the grounds. In addition, activities such as yoga classes, glass art workshops, cooking confabs, and other educational classes covering the gamut continue onward throughout the cold weather months.

Perhaps it is one of those events, or the warmer months to come next year, that will entice me to make my next visit to this unique destination within the Columbus metro. I definitely don't intend this to be my lone one, that's for sure.

Current Conservatory exhibitions "Harvest Blooms" and "Topiaries at the Conservatory" are scheduled to run through October 28th, while "Bonsai Display" and "Field" will run through November 11th. The Christmas-oriented "Conservatory Aglow" will be open to the public beginning on November 17th.