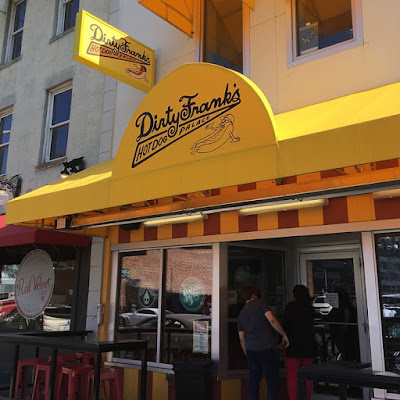 Currently, Dirty Frank's Hot Dog Palace seems just like "one of the gang" in its culinary/activity mini-corridor on the south end of downtown's 4th Street along with places like Mikey's Late Night Slice, Little Palace, and 16-Bit Bar+Arcade. It's also a restaurant, outside of its the mustard yellow awning, that wouldn't necessarily catch the first-timer's eyes immediately due of its smallish storefront (perhaps only its neighbor, Red Velvet Cafe, is more understated.)

But not unlike other Lessner restaurants, this hot dog-focused eatery was essentially a trailblazer, taking over the old Queen Bee Diner spot in a part of the city that wasn't much of a destination spot when it opened. Now owned by Nick Ailabouni (Lessner's business partner), Dirty Frank's also briefly ventured into another less-traveled part of the city with a Westgate location in 2013 (a location I wrote about on this blogpost.) However, potentially costly and needed building upgrades scuttled that location roughly one year ago, leaving only the original eatery standing. 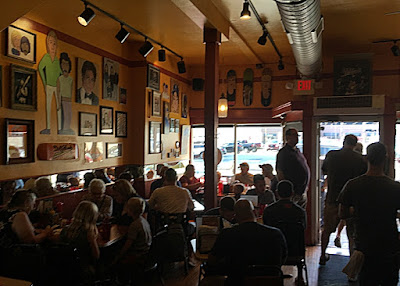 If you thought outside appearances might be deceiving in terms of interior space with Dirty Frank's, you'd be wrong.  When I first started exploring restaurants in depth back in the Bay Area, I often felt weird as a single person at many eateries. Dirty Frank's is the total opposite: being a solo diner is an advantage, as grabbing a stool in the bar area in quick order is generally a fairly short process even during the rush hours (of course, calling in an order for pickup is an entirely viable option too.) 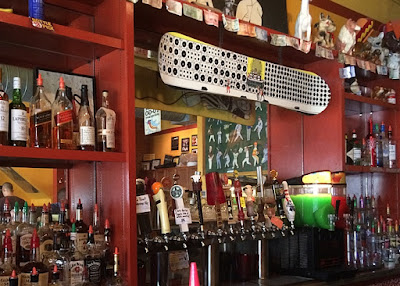 Service is generally pretty quick, but there's always plenty of time to take a gander of the unique sports- and music-oriented artwork, most of which was created by Thom Lessner, Liz's brother and probably best known nowadays for his artworks related to Marengo, Ohio's Hoof Hearted Brewery. 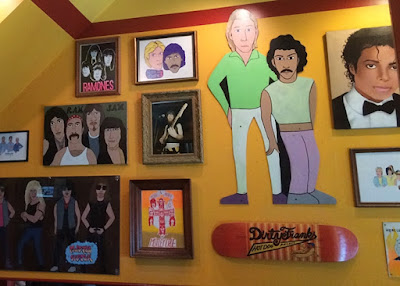 The hot dogs?  The focus hasn't changed one bit from when it opened (for a hint of some of the gut-busting research that went into Dirty Frank's creation, check out this post by my blogger colleague CMH Gourmand): a steamed Poppyseed Bun and a steamed Chicago-based Vienna Beef frank are standards, but you have several options on both the bun (including gluten-free) and the dog (too numerous to go into here.) 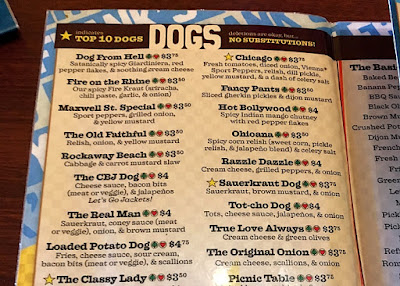 You could go simple here with the so-called "Birthday Suit" (bun and wiener with no toppings), but c'mon, the options are the fun thing at Dirty Frank's.  Cream cheese and green olives (the "True Love Always")?  Sure!  How about a bacon-wrapped frank with lettuce and tomato (the "BLT Dog")?  Of course. Wanna' go Fleetwood Mac (not a menu choice) and go your own way, selecting from over 50 topping options?  Yes, yes, and yes. For me, I'm open to any of the dog varieties listed - as long as it comes with a side of tots, I'm good.

There are other lovely things to entice you here, from craft beer and cocktails, to so-called "Sloppy Plates" (like the "Dirty Sancho", Mac 'N Cheese blended with beef brisket with corn salsa ) to a rather unique local ice cream provider (Powell's Dell's Homemade Ice Cream, which I wrote about at this blogpost), late night hours, and reasonable prices. You may not ever get to it all, but at a place like Dirty Frank's (now approaching its 10th anniversary come next year), much of the fun is in the trying.