Do the Dog: Dirty Frank's West 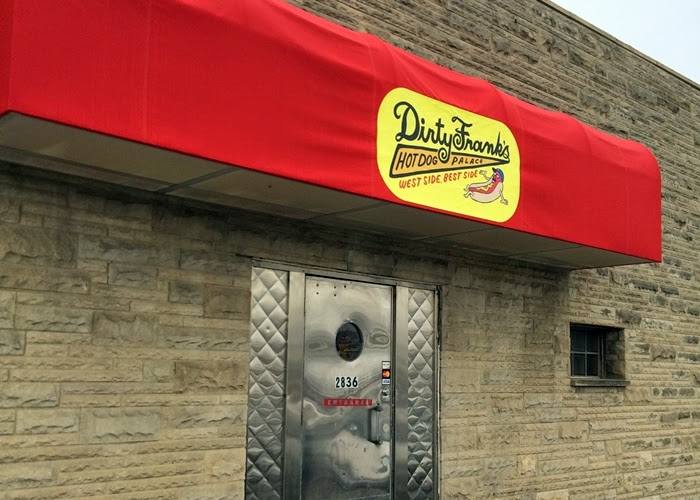 Long before the coffee shop came into its own as a neighborhood hangout, the local hot dog and sausage joint has and still acts in that capacity for many communities. Back in my childhood, that role was taken up by Sac's in the city of Vallejo. Another worthwhile option of the many in the Bay Area is the venerable combo of Rosamunde Sausage and Toronado Bar in the Haight-Ashbury of San Francisco. Folks can grab one of Rosamunde's tasty items and take it next door to pair with one of Toronado's excellent draft offerings.

Dirty Frank's, a member of Elizabeth Lessner's Columbus Food League (CFL) restaurant group, has been providing their versions of this American staple in the downtown Columbus area since 2009. They recently staked out a second location in the Westgate section of the hard-luck Hilltop neighborhood, and it seemed to be the perfect place for an uncomplicated but tasty late lunch on a day where I was criss-crossing through the metro.

The exterior of Dirty Frank's West gives absolutely no clue to the colorful, kitschy interior blending artwork of mostly 80s and 90s sports and music icons (done by Lessner's brother Thom) on the walls of a bar originally built in the 1940's. Unlike its downtown elder sibling, there is a lot more space within; the space in and of itself seems to be ideal for hanging out with family or friends and settling in for an hour or two of chowing and chatting, with local music (as proudly proclaimed on the menus, Dirty Frank's ONLY plays local music) providing background rhythm.

One can customize your own toppings or choose from a multitude of colorfully-named combos, including the "Puff the Magic Popper" with jalapeños, cheddar cream cheese and bacon bits, and the neighborhood-related "Mariann's Westgate Dog", which sports cheddar cheese over a combo of bar cheese, pretzel bites and brown mustard. All these items are priced quite reasonably from $3 to $3.50. Premium dogs with more exotic ingredients (e.g. The Hot Bollywood adds mango chutney) and/or bacon will cost you a little extra, but are still pocketbook friendly at $4 to $6.50. I went for one of the Seoul Dog ($4) in this category: the Korean Kim Chee paired up with a standard dog, bracketed with tater tots (any place with tots gets an extra check mark in my book), made for a satisfying combo.

Along with tots, Dirty Frank's has standard (regular hand-cut fries, mac & cheese, sriracha slaw) and not so standard (Boston baked beans and fried leeks) sides. A focused set of adult beverages is available along with your traditional pop and related liquid refreshments, as well as dessert options from a select group of local sweet treat purveyors such as Johnson's Real Ice Cream and Food For Good Thought, for example.

Like all CFL restaurants, Dirty Frank's West has supported their surrounding community with their "Community Partner Days"; at this location, many have been centered around support of nearby John Burroughs Elementary School.

From all indications, it appears the surrounding neighborhood has embraced Dirty Frank's arrival. Whether the restaurant can be that anchor that sparks an overall turnaround in the area is still to be seen, but the fact that CFL has given the area a chance is notable in and of itself. At the very least, it allows all residents of the metro area two places to drop by Dirty Frank's and do the dog (with tots, of course.)