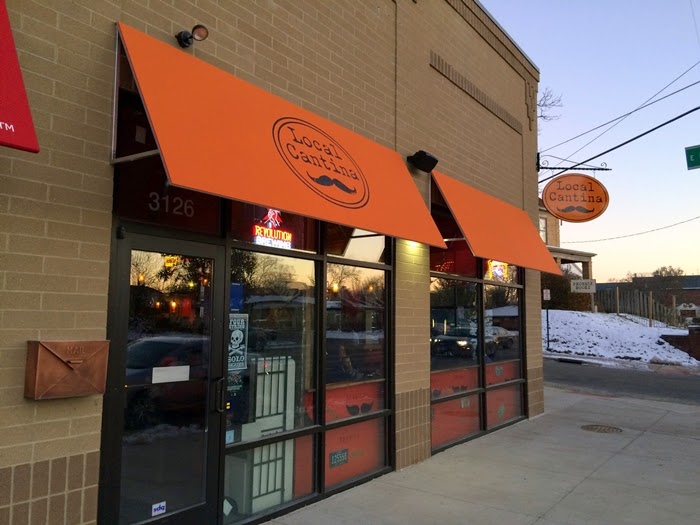 Open now for not quite two months, Local Cantina's new location in Clintonville is the third of this local mini-chain of casual bars serving Mexican-styled eats that strives, per its motto, to "Eat Craft - Drink Craft - Live Local."

My spouse and I had dropped by their first location in Grandview for a beer earlier this summer and got a taste of George Tanchevski's version of a neighborhood hangout (Tanchevski also is involved with other local establishments such as Aladdin's and Local Bar.) However, the new Clintonville location is the first where we were able to sample the edibles, during a visit with a large group of associates.

This location is somewhat smaller space-wise than its Grandview cousin; we found it can be a challenge during busy times to refill your bowls of free chips and salsa from their dispenser located in the far southeast corner of the room, or just navigate through the area in general. This space tends to be loud both audibly (a combination of normal conversation and the pumped-in music) and visually (the same quirky decor follows here from original Grandview location, with a mishmash of items crammed onto a smaller display area that does try to emphasize the restaurant's "Live Local" part of their motto to a certain degree.)

Their "Eat Craft" portion is represented by a selection of Mexican-styled eats. Their basic taco options ($3 - $3.50 each) shouldn't be mistaken for their taco truck brethren, but they are decent fare to munch on while sipping your beverages. Out of the four varieties we sampled, the roasted carnitas with pineapple mango salsa was our favorite.

Even better was their "Unibrow Poppers" appetizer ($4), which was something of a challenge/dare by our colleagues. These habanero poppers with jalapeno jelly were prepared well and packed a good dose of heat, but my spouse handled these fairly easily and was nowhere near asking for the complimentary glass of milk offered by the restaurant as heat relief.  Other than a this and other select appetizers and craft sides, other dining options include "Can-tizzas" (their take on a Mexican-style pizza), quesadillas, nachos and salads. Prices are generally pocketbook friendly, as no food item chimes in the double-digit range price-wise.

Local Cantina does do the "Drink Craft" portion of their motto pretty well: craft spirits are integrated into their cocktails and margaritas, and they offer a nice selection of craft beers (including Ohio-based breweries) both in bottle and on tap. On this visit, draft beer options from Columbus breweries like North High, Seventh Son and CBC were available, along with selections from Ohio-based Fathead's, Great Lakes, Brew Kettle and Jackie O's.