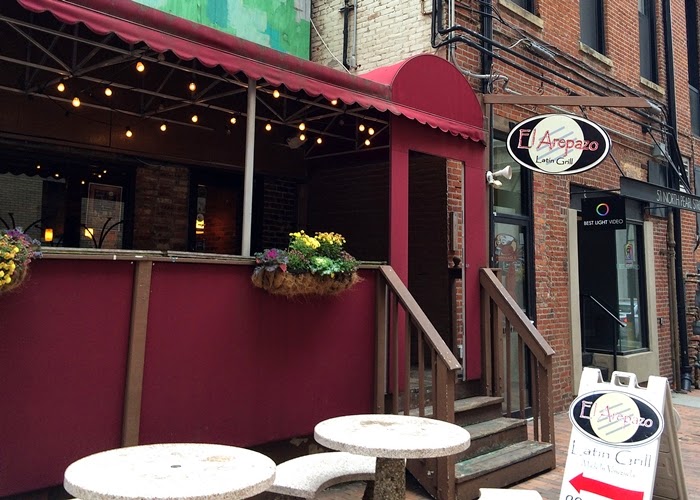 Other than Peruvian, South American cuisine was not commonly found in my former Bay Area home. One of my first discoveries in moving here was finding such a restaurant not too far from my workplace.

The original El Arepazo was established in 2005 in the Pearl Alley section of downtown Columbus. Seating capacity has actually been increased and the overhead space opened up over the restaurant's nearly 10 years of existence, including the addition of a small outdoor patio. However, rush hour can make dining in feel a bit claustrophobic. These tight quarters remind me of many places I'd find a bite to eat in San Francisco; at times, dining in here makes me feel like I haven't left San Francisco at all.

The drawback of the limited space at this location is trumped by far by the food offerings here. A select but wide-ranging array of dishes from many countries south of the border are offered to the diner, priced generally between $6 - $10.  These include dishes that I've had many times before in my former stomping grounds, including the Peruvian Lomo Saltado and their Fish Tacos. Arepazo's versions are both very solid renditions that I've ordered on past visits.

However, in my book, the Veneuzuelan dishes are my personal favorite. Their Arepa, grilled corn meal served with a mix of cheese, lettuce, mojito, avocado and banana peppers, is always an option when I drop by. On my last visit, I dove into their Patacon, a flattened and deep-fried plantain, topped with that same blend of cheese and other ingredients previously mentioned, with your favorite protein (beef, pork or chicken), that proved to be a unique blending of flavors and a very hearty lunch.

If nothing else, the scrumptious eats and continual large daily numbers of lunch-goers at their anchor downtown location were and remain proof that El Arepazo's potential appeal to the metro at large. Indeed, El Arepazo has expanded their reach beyond their anchor location, first with a well-received (but now defunct) mobile operation (Yerba Buena Latin Grill) and, more recently, brick and mortar locations in the northeast portion of the metro in Downtown Gahanna (a post of which can be found at this link) and their newest location in the German Village neighborhood.