Note: Part 1 of this post can be found here at this link 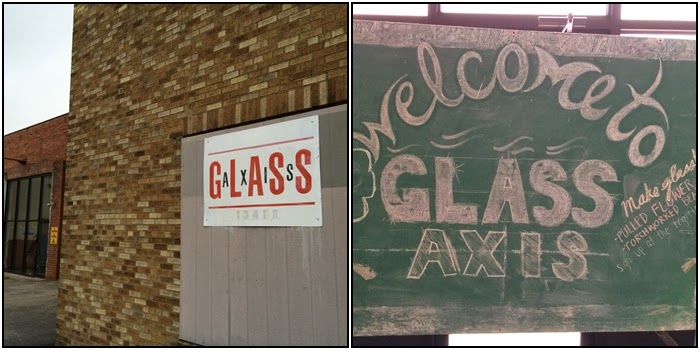 The Glass Axis: Founded in the late 1980s by Ohio State University students and graduates, The Glass Axis has been a prime force in Central Ohio in promoting and providing support to people who specialize in the glass arts. In addition to this main focus, this non-profit organization offers teaching and education to the public at large, including classes that allow the dabblers (like me, courtesy of a gift certificate given to me by my spouse) to try out their artistic flair.

In addition to the class, we had been able to frequent their old Grandview location for their Annual Holiday Sale, where a collection of glass-made gifts, ornaments and other items are available for purchase. This year's edition allowed us to visit their new location in Franklinton after they had announced their move early in 2014.

Based on what we saw, the new facility looks to be a keeper. Much of the space was organized to handle all the sales goods (there were plenty of attractive options available for the Christmas shopper), but was plenty of room to handle the hot glass area as well as what seemed to be a special display and exhibit area. On this day, visitors could mix in their shopping with workshops to make their own glass-made goods while partaking in a good cup of free java via the Cafe Brioso cart. 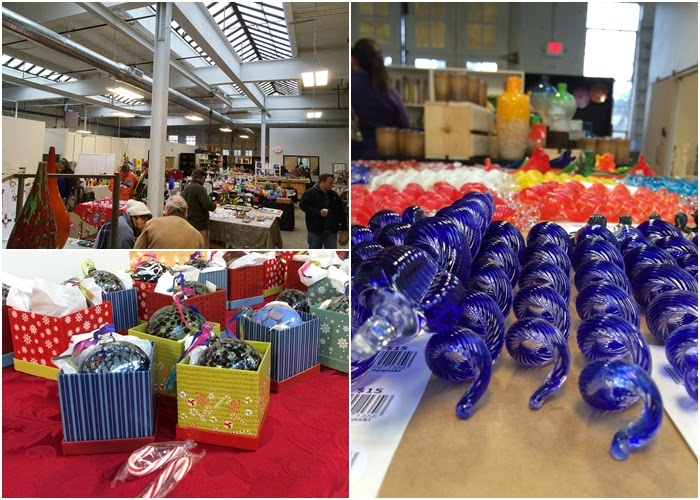 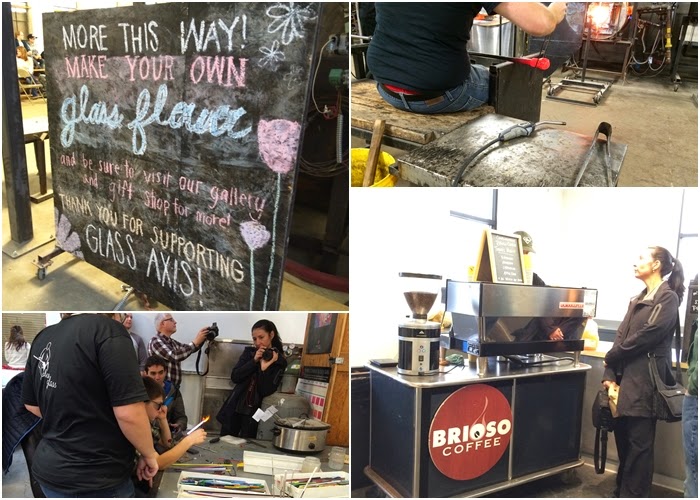 The Glass Axis' official re-opening at their new Franklinton facility is set to take place January 2015; for information on this event as well as Glass Axis' services and classes, please contact them at: 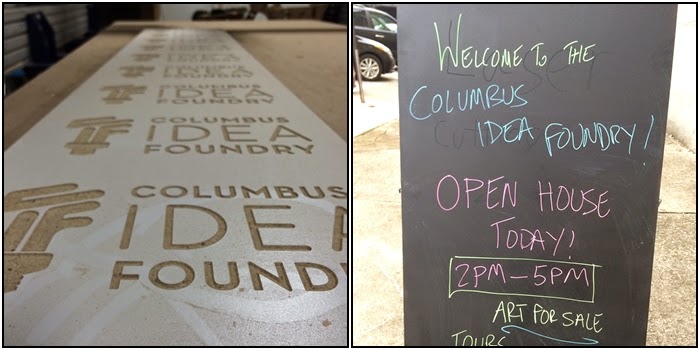 Columbus Idea Foundry: While members of the Glass Axis specialize in all things glass, the folks associated with the Columbus Idea Foundry (CIF) pretty much take on all fields of art and design. With the wide swath of inventive minds under this roof, one should not be surprised by a slightly mischievous, go big or go home environment. 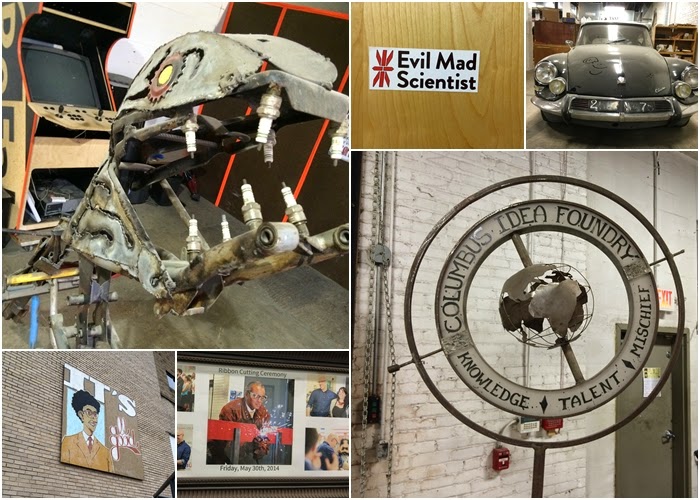 Founded in 2008, CIF is another organization who relocated within to the Franklinton neighborhood with the assistance of a $350,000 grant from ArtPlace America. Along with offering wide-ranging classes to the public (including blacksmithing, electronics, fashion, and functional arts such as gardening and lockpicking(!)), regularly scheduled Maker Family and Maker Date Night events allow families and couples to explore their creative side while satisfying any built up hunger pangs via an in-house potluck of sorts or a dinner at nearby Strongwater Food and Spirits. Additional fun onsite is available in the form of the team-building Trapped In A Room with a Zombie game, where groups of people can use both mental and physical faculties to avoid a most dastardly attack by the undead.

Similar to the Glass Axis, we had attended their holiday sale/open house at their old Milo-Grogan location and wanted to check out their new facility. Like the previous year, select items were offered for sale, including Magnet Gears, a holiday gift my nieces and nephews enjoyed immensely. 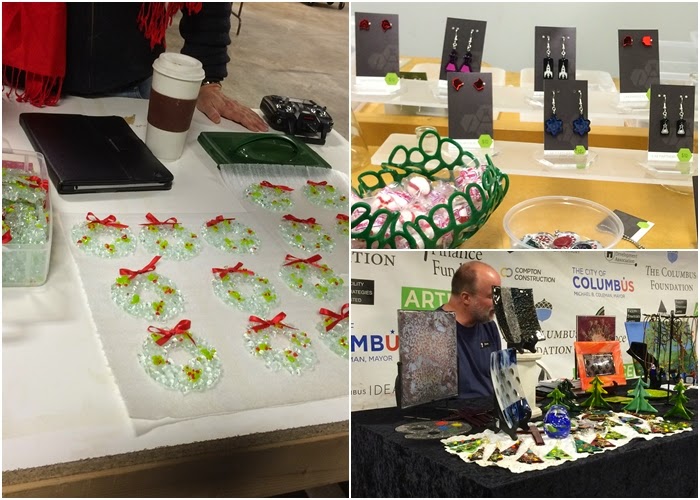 But perhaps the true creative spirit was evident in the demonstrations that day. People could carve out and make their own wooden pen in the wood-making area. In addition, we had on a previous visit performed some pewter casting before with CIF member Terry Griner. Indeed, his enthusiastic self was there again, entertaining the crowds with his tales; he ended up swapping some old-location COSI stories and laughs with our friend we were entertaining from out of town. 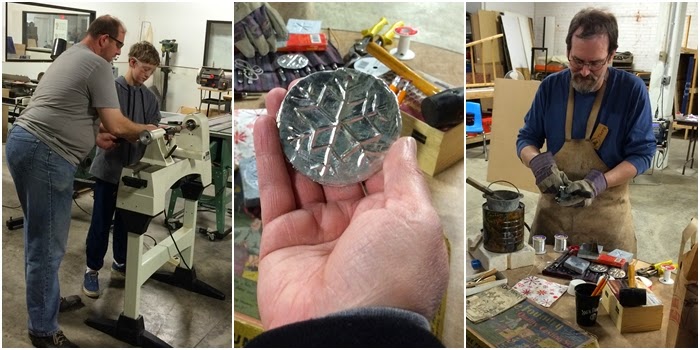 For more information about the classes and services provided by the Columbus Idea Foundry, please contact them at: 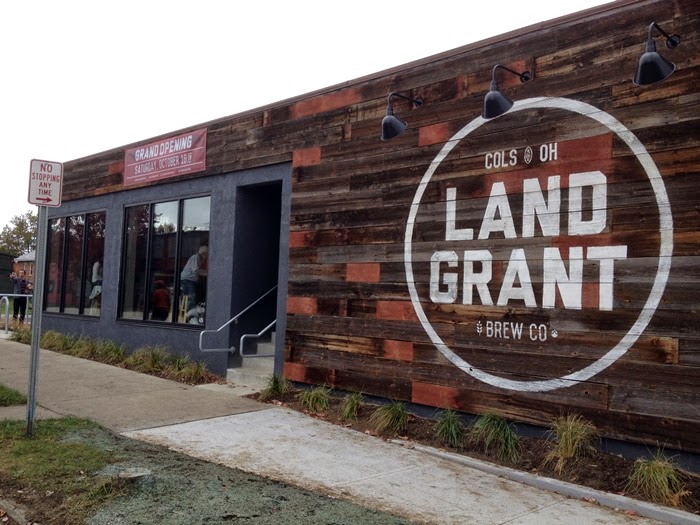 Land-Grant Brewing Company: I managed to sneak in a quick survey during Land Grant's grand opening back in October, but this visit was really my first where I could sit back and soak in both the atmosphere. Of course, the brewery's Franklinton location made it a perfect stop for all of us on this busy day to relax for a bit and sample some of their offerings.

Starting off as a Kickstarter campaign back in 2011 under its original Oval Brewing name, the building that has now become Land-Grant has a fairly straightforward interior: the bar, television screens, seating area and outdoor patio is setup in a way that allows patrons to not feel too crammed except on the most packed of times. Their take on the sports/university motif (banners for Ohio State University and most of the country's other land-grant universities can be found lining ringing the walls) is novel and shows just a bit more thoughtfulness than your typical average sports bar. 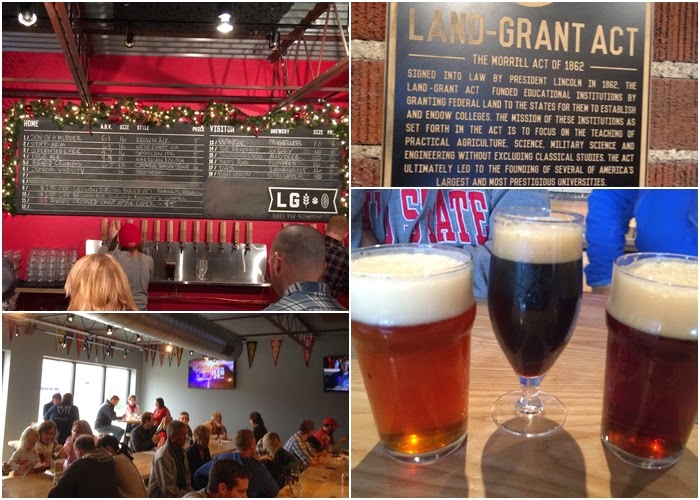 Land-Grant does not have an on-site kitchen similar to many other Columbus brewery locations, but they have adopted a regular rotation of fairly well-known area food trucks to provide visitors with food options. The brewery has a selection of their own beers on tap along with a select number of beers from both Ohio-based and outside-the-state brewers.

As one might expect, their beers have adapted names related to the land-grant/sports theme. On my first visit, I found their 1862 American Kölsch Ale (named for the year when the Land-Grant Act was passed) a nice crisp beer, perfect for a hot summer day.

On this latest visit, we got to sample three more of their offerings, and all three had their good points. Their Stiff Arm West Coast Style IPA didn't have that sticky, bitter punch of some of the more well-known exemplars; however, there was enough there to not only please my spouse (the IPA lover of our group) but also gain an appreciated from her friend and I (who are more into the darker styles of beer.) The Son of a Mudder Brown Ale also was similarly milder only in that we had had Seventh Son's very nice and much more assertive Stone Fort Brown Ale the night before; that fact made it no less enjoyable, however. Perhaps our favorite offering by a nose was their Beard Crumbs Oatmeal Raisin Stout: it turned out to have a pleasant blend of raisin, malt and chocolate flavors with a nice body and mouthfeel all the way to the end.

The owners of Land-Grant have also shown the ability to make lemonade out of lemons, an aspect that would seem to bode well for their future. An act of vandalism on their new building early in December has led to a fundraising effort for Franklinton's Gladden Community House and Harmony Project via the sale of T-shirts which have been redesigned to mirror the results of the vandalism. All proceeds from the sale of the T-shirt (which can be ordered on their website here) will be donated to these two community-oriented organizations.