These days, White Castle's 400+ locations are spread out through 13 states (though, just like Dorothy in the Wizard of Oz, they're not in Kansas anymore). In part, the restaurant's iconic design features were inspired by the generally bad reputation that the meat industry had in the early 20th century - the castle motif, small size, stainless steel interiors, and clean-uniformed workers helped convince diners that these eateries were safe. Add the fact that they remained open 24 hours a day, 7 days a week, and White Castle had a formula that has led to long-term success.

With that said, I thought this blog post wouldn't be complete if I didn't mention White Castle's look to the future, a modern revamp of an existing location in the Short North neighborhood in Columbus. 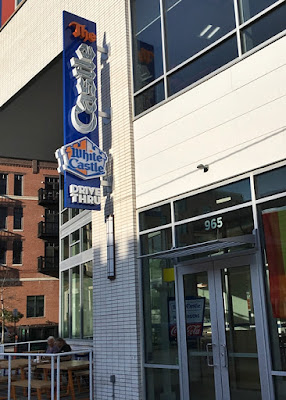 While the technology implanted within was nowhere near possible back when I was younger, you can bet my nerdy self that I would've drawn in for the spectacle had it been available, with innovations like mobile phone order lockers, touch screen ordering, the Coca-Cola mix-and match pop machine, beer and wine options, and test items like a Black Bean Slider and (heaven forbid!) a side salad. 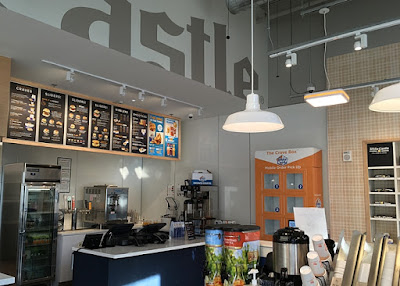 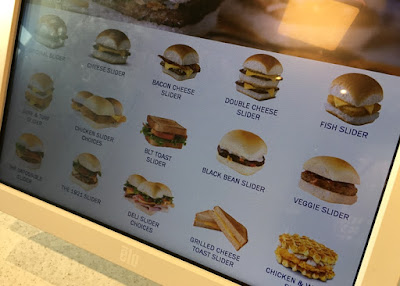 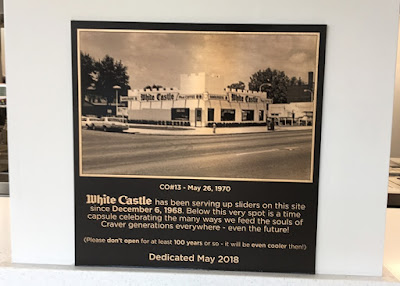 With that mentioned, it's time to look at their food. 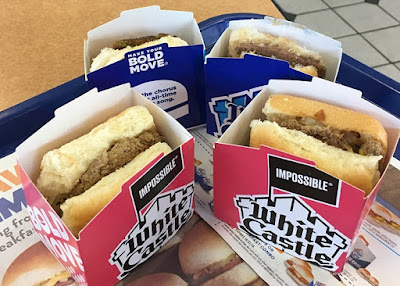 Classic Beef Slider, plus Cheese and Jalapeno Cheese variants - For this and the Impossible Slider, I had the esteemed company of my fellow blogger CMH Gourmand, a White Castle veteran/fan of the company, to help get me acquainted (for his take on Impossible Slider, check out his blog post here.) 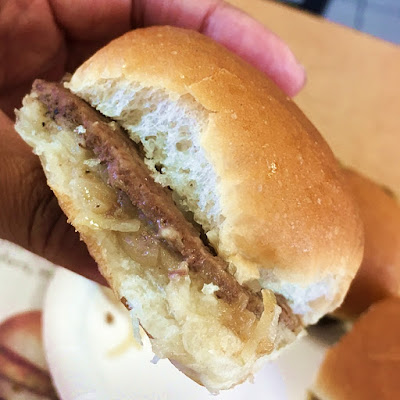 I can see how these are considered crave-worthy by many - their compact size makes them easy to manage and their generally soft texture, from the bun (baked out of the Evendale Bakery in Cincinnati) to the steamed onions and beef patty inside, make them somewhat slurpable.  For me, the basic model is fine, but cheese and jalapenos add a nice flavor boost.

Based on this and my younger day tendencies to go big, I probably would've still preferred things like the Jack In The Box Sourdough Jack or, if I were dining in, the creations of Nation's Giant Burger, a Northern California institution since 1952.  The slider probably would've made more impact as a quick and cheap eat, though I still haven't found anything that would replace my love of the Jack In The Box Taco, a creation that is barely a taco but was and is incredibly addictive (I am apparently not alone in this feeling, as noted in this following Wall Street Journal article.) 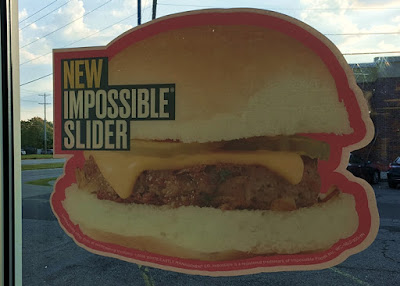 Non-Beef Sliders - Interestingly, it was the Impossible Slider that bought "Harold and Kumar" star Kal Penn, both a vegetarian and investor in the company behind this product, back to White Castle.

I've had some experience with the Impossible Burger via a visit to Clintonville-located Acre Restaurant not too long ago, so I wasn't too surprised by the patty itself - it's pretty close to the real thing but there's just enough difference to make the unsuspecting person a little suspicious.

However, what came with it was a surprise (smoked cheddar, some different styled onions, and no pickle) and both I and my fellow blogger came to the same conclusion: having an ingredient list as close to the original slider is a much better way to go.

I also sampled their original Veggie Slider, introduced in 2014 and featuring a Dr. Praeger's produced patty. This old school patty won't fool anyone who's looking for meat, but I actually got to enjoying and eating Dr. Praeger's patties later in my adult life, so I was perfectly happy with these.

Finally, their Fish Slider is really the McDonald's Fish O' Filet that I've always wanted.  White Castle's has a perfect proportion of bun to fish, as opposed to its bread-heavy counterpart from the Golden Arches. 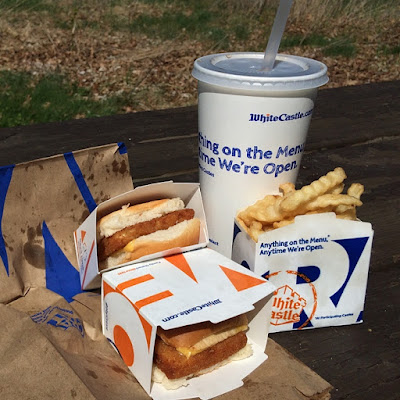 Other Items - I didn't care too much for White Castle's Chicken Rings - my first (and last) order came out a little on the dry and chewy side. While there is a Chicken Ring Slider, I'd probably opt for the standard Chicken Breast variant on the next visit. Also, their crinkle fries are sort of in the middle rung of fast food fries - I like the change of pace from the standard shoestrings, but the I like my fries to have a little more crisp on the outside.

On the other hand, I've been more than pleased with White Castle's breakfast items. The Castle's basic Breakfast Slider (your choice of Sausage or Bacon, Egg & Cheese) more than holds their own against McDonald's McMuffin counterparts. However, it is the special Chicken and Waffle Slider (note: I've never been a huge fan of the combo in the past) that had me thinking there is actually something to this pairing in the past. 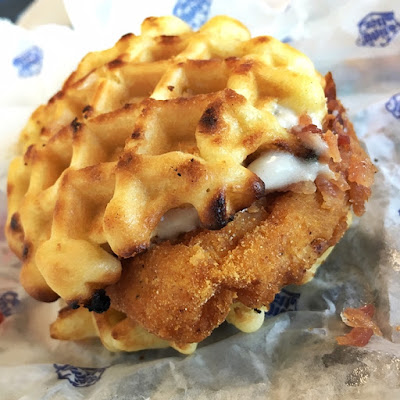 The Hash Brown Nibblers are also quite divine, kind of like a marriage of two of my favorite potato formats (hash browns and tater tots.)  I could easily see a couple of White Castle breakfast items (as is the trend, their menu is touted as "Anything, Anytime") joining the Burger King Croissan'wich and the briefly available but glorious Taco Bell Country Sausage Breakfast Burrito in my earlier days as the prime suspects for an early bite.

Final Thoughts - I'm glad I've finally got acquainted with what White Castle has to offer. I can see their sliders as an occasional bargain indulgence, being more naturally modest-sized versus the offerings of their competitors, and even a more healthful one as well if options like the Veggie Slider and Impossible Slider remain on the menu. And now that my wife and I heard about their Valentine's Day table service option, it almost seems mandatory to give that a shot.

A big bonus to all this sampling? I avoided that date with indigestion, something that I can't claim with the offerings of some of White Castle's fast food counterparts.