When I finished out my Greater Columbus Pizza Map earlier this year (for the story of that quest, check out this blog post and this one for the cheesy details), a discussion with my fellow blogger CMH Gourmand shortly afterward stuck with me. As he noted, one cannot dine on exclusively off the best gourmet pizzas of the metro unless one is ridiculously well off, and you if you look hard enough, you can find some measure of pizza satisfaction across all of the pie spectrums.

Indeed, feeding a field trip sized bus full of hungry elementary children with 20 large pizzas from a place like Natalie's Coal Fired or Harvest Pizzeria ain't economically feasible for most.  With that said, you would prefer not to feed your kids the dreck of the pizza world either.

In summary, I'm taking a little different tack (and inspiration) from the map and the subsequent discussion. Obviously, a pie from Harvest is almost certainly going to be significantly better than a pie from Little Caesars, but in some ways that's an unfair comparison as they sport different price points, different styles of pizza, and in many ways, striving for different audiences.

So which pizza pies are just plain good, which ones don't cut the mustard, and which ones punch above their weight? I figure delving into a couple of pizza places per month would be a good way to entertain this quest.

I've generally found pizza places specializing in pizza-by-the-slice to be conveniently located, fairly reliable but rarely spectacular. In California, places like Fat Slice and especially Blondie's were my go-to types, with a slight uptick when it came to the unique slices of The Cheeseboard. And more recently, we found an atypical example of a slice joint hitting well above its class in Charleston's Uneeda Sicilian.

Upon my move to Columbus, I became well acquainted with two downtown restaurants within (pizza) stone's throw of each other in Cafe Napolitana and Pizza Rustica. While you can order whole pies from them, their focus on the pizza-by-the-slice concept is the focus for this blogpost.

Cafe Napolitana, owned by Palmo (who hails from Calabria, Italy) and Deanne Aracri, has peddling slices for downtown workers and residents for over 25 years now, shuffling along several spaces downtown until finding the space at 40 North High to their liking. Meanwhile, Miami-import Pizza Rustica originally cast its trays in the University District in the South Campus Gateway area, but only their second location at Broad and High (opened in 2014) proved to be economically viable. 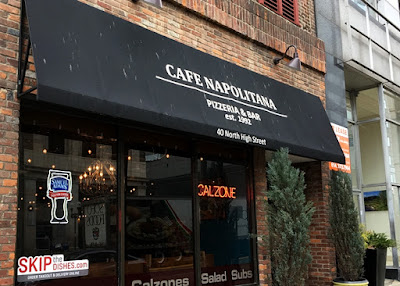 Cafe Napolitana is more of the classic style of slice joint. Buoyed by lunchtime specials, a steady stream of downtown workers come in to grab slices of the basics like cheese, pepperoni and cheese, and so forth. The turnover is enough to ensure that your New York style slices are fairly fresh; they can doctor up a slice with more toppings, but you will need to wait a touch to get it prepared. Sandwiches, calzones and strombolis are also available if you're so inclined 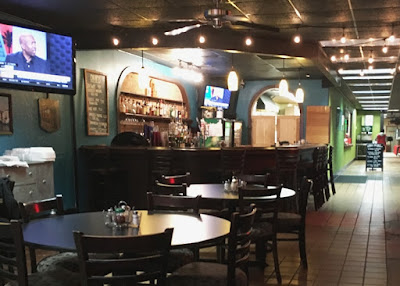 Napolitana's interior is quite spacious, with a front room and two bars (one of the front room and late-hour oriented Alley Bar in the back, which offers a patio space just off Pearl Alley as well as a pool table) bookending the kitchen area. There's enough of a variety of liquor, wine, and bottled and draft beers to satisfy most anyone, and it's easily a space that you can linger if you have the time. 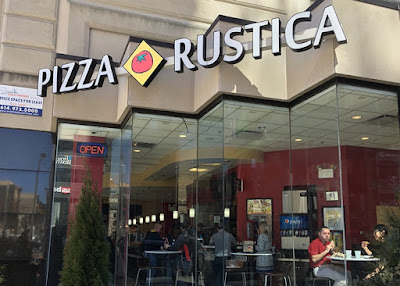 Pizza Rustica, on the other hand, is more built for the take away crowd.  Housed in the old Caffe Daniela space, Rustica lays out long, rectangular slabs of their Roman-style pizzas on trays behind glass panels, with varieties that range from traditional (Margherita and Pepperoni) to fanciful (Buffalo Chicken and Chicken Parmesan.) Salads, subs and calzones round out their menu mains. 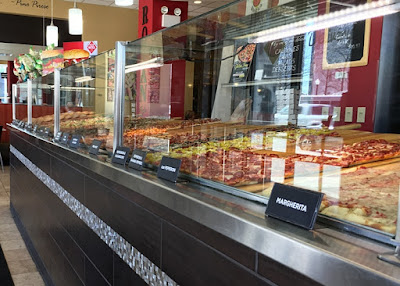 As slice joints, both these eateries have proven to be reliably solid; there's nothing wow-inducing in these pies, but they're more than adequate for a satisfying lunchtime meal.  Napolitana offers the better economic deal especially if you take advantage of their lunchtime specials, producing generously-sized New York style slices that are often just a bit greasy (but not excessively so) and eminently foldable. 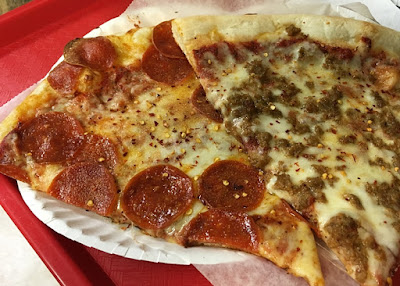 When I first stopped into Pizza Rustica, I wondered a bit about if their rectangular slices (which are cut nicely into more easily-handled squares) would suffer with the pre-cook and then reheat process. As it turns out, the slices turn out fine, sporting crusts that are a little crispier with a nice chew and just a bit of density. It's the latter aspect, plus the generally generous topping coverage (I've found myself opting for varieties that contain sausage) that I think makes me feel almost as full from one single slice of Rustica's pizza than two from Napolitana.