A Blogoversary with a Twist

Well, four years are in the book for this blog, and suffice it to say it continues to chug along quite nicely. Stats are kind of boring, so I'll keep this section short and to the point. The blog continues at roughly two posts per week, we reached 1,000 Instagram followers at the end of 2017, and the combined road- and air-trip miles for us ended up close to 10,000 total, including at good quarter of those spent on a nicely epic seven-state excursion to catch the Great American Eclipse of 2017.

I had thought doing something similar to last year in posting some pictures from last year's adventures that didn't make the blog. However, a current saga from a local personality in combination with a picture I came across from what seems like many moons ago gave me the notion that this shouldn't be a typical blogoversary post.


I have always been a bit of a weather geek, and I've always been drawn to broadcast meteorologists who've shown a enthusiastic flair for their craft.  Perhaps unsurprisingly, when I moved to Ohio, I joined many who found WBNS-TV's meteorologist Chris Bradley's enthusiastic style of reporting the area's diverse weather very appealing. Likewise, I and many others have been hoping for the best for, and closely following the battle that Mr. Bradley has had with Acute Myeloid Leukemia, one of several maladies where a bone marrow transplantation from a matching donor can provide the cure.

Related to this, I got a call several years ago that I frankly never expected I'd get, and the words sent a tingle through me as I fully digested their meaning. The caller on the other end of the line stated that I had been identified me as a potential bone marrow donor match, and asked if I would agree to further testing to confirm the finding.

I had put myself on the registry a couple years prior via a booth at a local community festival, and to be honest I didn't think too much about it at the time.  Perhaps it was because of how simple it all seemed: after completing a form with my basic info, I was asked to swab the inside of my cheek for some cells and hand the swab back (this process can be easily done through the mail as well.)  And while any registrant can decline the request no questions asked, that option never entered my mind.

At testing performed a few weeks later, doctors not only confirmed that initial match, but also that I was healthy enough to make the donation.  They did let me know that there would be a twist, however: in many instances, including Mr. Bradley's, a donor is given daily injections of a drug to increase the release of Peripheral Blood Stem Cells (PBSCs) in their bloodstream for several days straight. Those PBSCs are then transplanted to the patient via a process called apheresis.

In my case, however, the doctors determined that a marrow harvest was best. I would be placed under anesthesia, and a needle would be lodged into my hip bone to withdraw the liquid marrow.  I still could have theoretically backed out then, but in my mind that really wasn't an option.  To borrow from Neil Young, this would be a matter of "The Needle and the Damage (Un)done", with any luck. 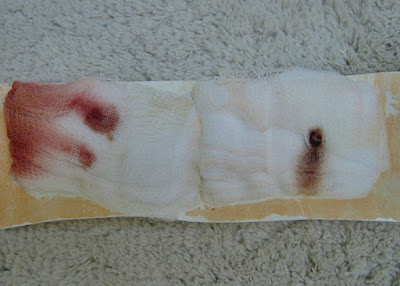 This picture was taken about a few days after my harvest, when I was instructed it would be okay to remove my bandages from the marrow extraction sites. I still was feeling a little tired at the time as my body was catching up with replenishing my own marrow supply.  I don't know what inspired me to take this picture of my soon to be discarded bandages, but I think it was those perfect red circles, circles which meant life for someone else.  I had already agreed that I would donate if needed again, but thankfully in this case, that was not needed. 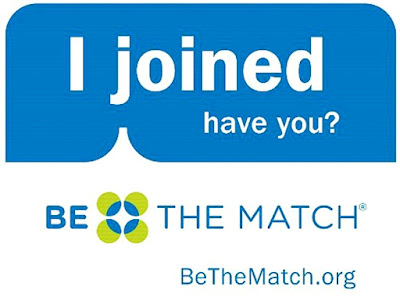 So what of this little non-traditional excursion, in the end?  A simple few sentences, really:

If you aren't a member of the Marrow registry, please consider joining. I actually discovered as I was cleaning this post up that yesterday May 28 was World Blood Cancer Day, a day dedicated to raise awareness of and show solidarity with those who are affected by these cancers. While this post might be a day late, the need is there all days of the year. I also wanted to point out the need is particularly acute for those who are from minority populations or individuals of mixed-ethnicities.

For those of you readers who are already members of the registry, I give a wholehearted "Thank You" to you. You may never end up matched up with someone in need during your time on the registry (about 1 in 430 people do get matched up), but the effort you made is commendable regardless.

For those who are awaiting a match, I can only hope your quest is as successful as the individual with whom I proved to be a match.

And for all those who are firmly behind charitable causes close to your own hearts, a hearty salute to you as well.  There are great organizations out there from Pelotonia and the Mid-Ohio Foodbank to CRC to the Columbus Foundation and many, many more, and we do our best to support them when we can.

And now...onward to year five.