If you're like most pizza lovers, you've had your share of dreadful pie in your lifetime, and like many, your experiences were dictated by economics. Some recent reminiscing brought me back to my college days and one of my most memorable (in a bad way) go-to cheap delivery pizzas. These pizzas, which came laden with a thin, tinny tomato sauce, grayish sausage, and slivers of something resembling pepperoni, were so soggy and floppy that you had to roll the slices up or risk planting that motley collection of toppings all over your chest.

In the spirit of that reminiscing, I decided last month that I would go back to some of those bad pizza pie roots, but with a twist: my choices would be two chain places that had earned a reputation as some of the worst mass-consumed pie options around, but reversed their downturn in fortune by essentially exchanging each other's menu focus. 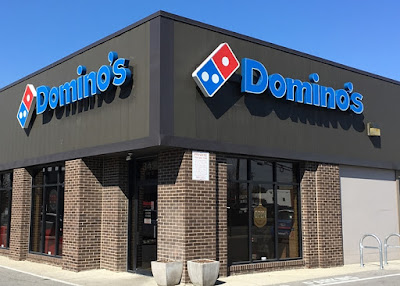 Started by the Monaghan Brothers in Detroit in 1960, the pizzeria that started off as Domi-Nick's but is now Domino's touted its speedy service as its strength (delivery with 30 minutes or the pizza is free.) For our family, that strength wasn't a huge deal: we were more than happy to send someone to pickup our phone-in orders. And in terms of cheap chain pizza, we preferred their regional rival Little Caesar's (not the greatest pizza either) over Domino's just plain bad pizza rendition.

When Domino's halted the thirty minute guarantee offer, there was much less of a reason to buy Domino's sub par product, leading executives to realize a remake of their pie was needed. To their credit, the revamped pizza Domino's launched in 2009 was a successful venture, and they have parlayed that momentum into other well-received menu additions like pasta and wings; add in some technological improvements, and they have overtaken Pizza Hut this year as top pizza chain in terms of sales.

I have had this new Domino's pizza at various functions, but they were always a never fresh and hot out of the oven proposition. In fact, I personally have never ordered a Domino's pizza for my own consumption and mine alone. Many would probably consider me lucky, but in the spirit of trying new things, I thought it was time to fork over the cash and get as fresh a version of this pie as possible. 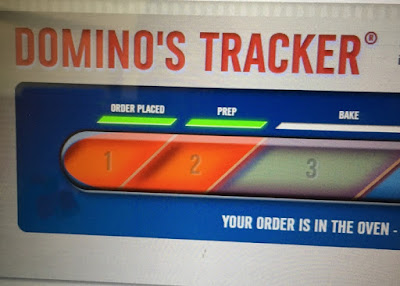 Speaking of technology, Domino's touts their online/mobile ordering process as an asset, and I would have to agree. Selecting the closest branch and scrolling through the menu was a pain-free experience, and the Domino's Tracker gave me a good idea of when to arrive so I could dine in with as close to an out of the oven pie as possible. Other bonuses are available to more avid customers, including collecting points towards free pizza and their so-called Carryout Insurance, which guarantees a replacement for any pie which is damaged outside the store.

It probably goes without saying, but if you're not using a coupon or taking advantage of the specials at a place like Domino's, you're doing yourself (or more properly, your wallet) a disservice. I had intended on ordering a more modest pizza, but when I saw that the full on combo pizza special would be actually cheaper than my creation, I said what hey and went with it. 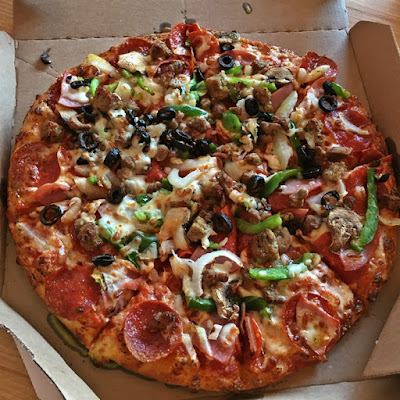 The verdict: the pizza is indeed much better than I remembered, with the crust being perhaps the best part of the pie (but do take a hard pass on their Garlic Dipping Sauce, a very oily experience that made me appreciate how good the version that Mikey's Late Night Slice offers to its diners.)  And yes, you do get a lot of food volume for the money.

Still, as I was making my way through my slices, I felt there was much better pie aching to come out, if only the sauce had just a bit more zing, the pepperoni a touch more spice, and the veggies just a bit more crunch. The cold version of this pizza didn't bring improve or worsen this condition, so in the end, I'd rate this revamped pie as decent fare best suited for mass-quantity feeding that won't break the budget. 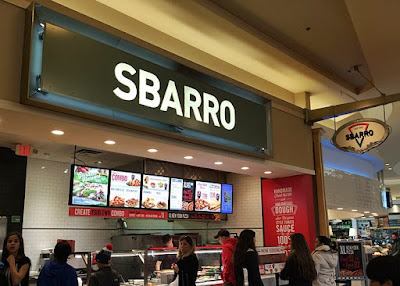 A more extreme but similar story can be found with Sbarro, reaching its heyday as the king of mall pizzerias from the 1980s into the new millennium. However, the national decline of the mall as a destination in this country led to this eatery's slow decline (a situation exacerbated by an overly large and generally bland menu) and an eventual bankruptcy in 2011.

After a second bankruptcy declaration in 2014, this eatery seemed all but dead, but a concerted effort to resurrect the brand was undertaken by its new owners. This resulted in a re-branding and a shift away from the mall to include more standalone locations. Sbarro also trimmed down its menu to focus on the basics and relocated its headquarters to right here in Columbus.

My experience with the old Sbarro menu was also uniformly blah, with a pie that in my mind was even worse than Domino's. The only saving grace for me (i.e. dish with a decent amount of taste) was their Baked Ziti, and even that floated off my radar when I started cooking my own simple but far more tasty bake-at-home rendition.

However, I had heard through the grapevine that the remade Sbarro might actually have some worthy pies, and sure enough they were taking "Best Of" accolades at the annual and popular "Slice of Columbus" events at the Columbus Commons.  This news warranted a revisit in my mind. 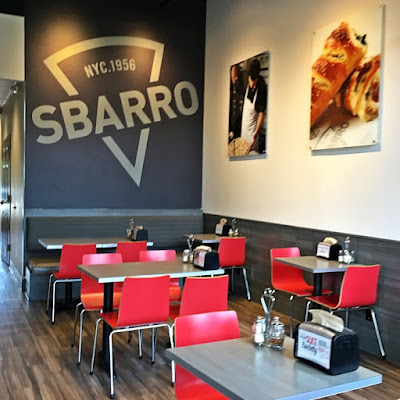 The remodeled mall stands and standalone locations that I've been to are sleekly designed, with a simple logo that reminds you of their New York City roots. 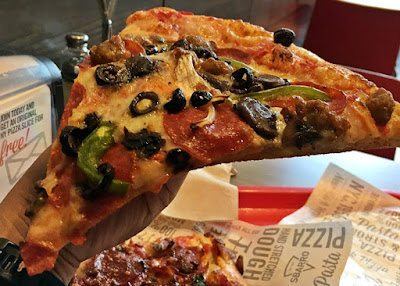 In terms of budget, it seems a little bit harder to nab a coupon to knock off a few bucks on a Sbarro whole pie (coupons appear to be readily available if you join their Slice Society), and their online ordering technology isn't as smooth as Domino's. But Sbarro's main focus is the slice game these days and it's a much easier proposition anyway.  Despite the slightly different formats (slice vs. whole pie), Sbarro for me gets you a lot more (flavor) for less (toppings) when compared to its competitor from Detroit, enough there in fact for me to see how it could garner some wide-ranging favorite status public event like Slice of Columbus.

Of course, it's much too early to declare it the best of the chain pizzas - there's a long way to go, and a whole (lot of) pie to get there.