After our jaunt for antiques in downtown Coshocton at the Coshocton Antique Mall and some fine German brews at the very appealing Wooly Pig Farmhouse Brewery, we figured it was time to grab some food for lunch. And in less time than it takes to tell, we found something quite unusual down the road that did the trick. 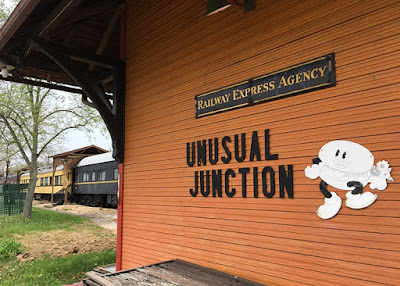 Unusual Junction would fit right in along the famed Route 66, where the lore of the road trip and automobile mix with a sense of nostalgia and occasionally just a touch of cheesy goodness.  As it stands, this attraction resides along Ohio's US 36 as if it were dropped from the sky. Drivers can thank the McKenna family from Cleveland, whose patriarch Jerry purchased this farmland in the early 1970s.


In the subsequent years, McKenna brought in the rubble that was the old Fredricktown, Ohio railway station and reconstructed it on his property based on historic photos.  By the time the vintage railroad cars were brought in, and well before the restaurant and bridal/prom store was added, this homestead was well on its way to earning its "unusual" designation. 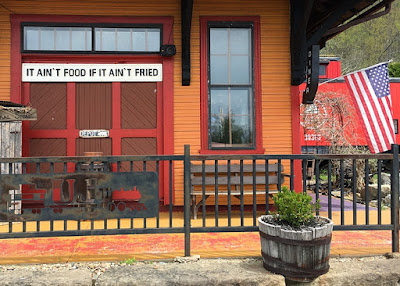 Of course, we were here for the food in the form of the Junction's Lava Rock Grill, and a sign outside confirmed what we had thought: a little loosening of the belt might be needed after our meal. 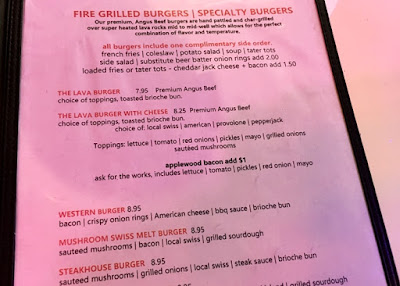 We figured out why the grill was named "Lava Rock" pretty quickly: the menu was filled with diner-type items, with the specialty residing in the hand-pattied burgers that are charred over heated lava rocks. I couldn't resist ordering one (bonus points for tater tots as an side option) and it most definitely sported that charred texture one gets with a burger cooked over coals or rocks of some sort. 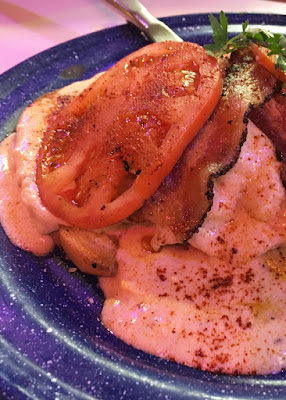 Meanwhile, my spouse was intrigued by the house's daily special in the Kentucky Hot Brown and ordered it up. Served on a blue plate (we're unsure if that was intentional or not), this version was decadently rich and could easily send one into a post-lunch coma. Both dishes were quintessential diner food and perfect for our travels this day. 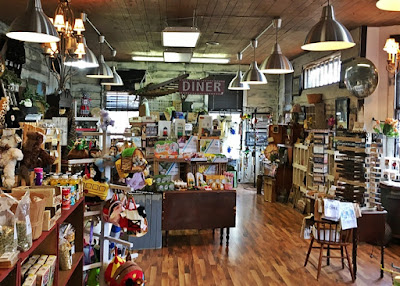 With that said, the grill is not the only attraction at Unusual Junction. The business sports a large prom and bridal supply store, as well as a deli for those more interested in grab-and-go fare. It also sports a general goods store that sells a bundle of local edibles, arts and crafts, souvenir-type items and random tchotchkes.

One could glance quickly at the random record album covers that plaster on the wall both in the grill and the store, or wander to the very back to admire the grill's pièce de résistance in the form of a genuine Price Is Right game show stage set sign. This sign, which was acquired by the owner via auction in 2009 (the family were huge fans of the game show), is autographed by long time original show host Bob Barker. 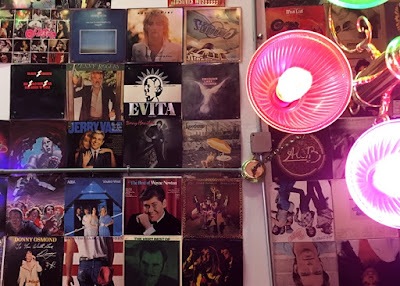 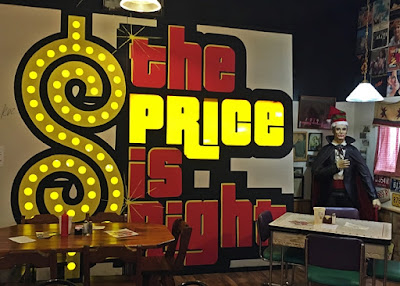 We discovered that Unusual Junction had a sister location in historic Roscoe Village just north of downtown Coshocton, and we decided to head there to walk off some of our meal. Like its fellow historic canal town to the northeast in Zoar (a place we have blogged about in the past), Roscoe Village has its historic buildings and tours, with a similar living history experience you get with Zoar or Ohio Village for a modest admission fee ($10.95 or lower for the 2018 season.) 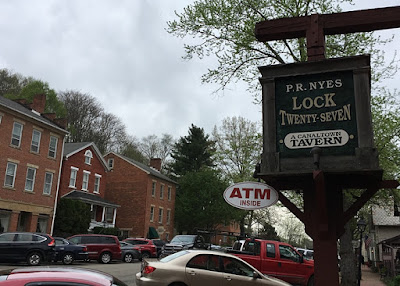 Even if you don't opt for the living history option, Roscoe Village is at least worth a walk through if you're in the area. Medbery Market offers many of the same local goods and a touch of the quirkiness as their sister outlet Unusual Junction, plus a deli and a Velvet Ice Cream stand. 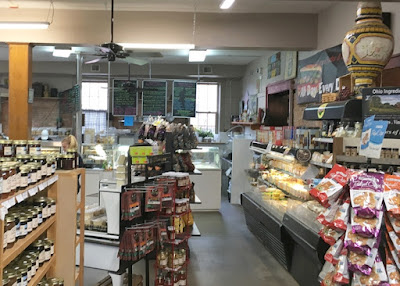 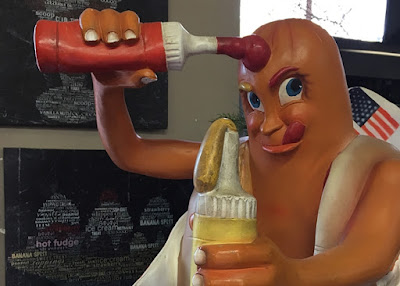 Meanwhile, the smell of fresh leather from River Ridge Leather was intoxicating from outside; the goods inside are well made and fairly priced (I walked away with a belt from here myself.) 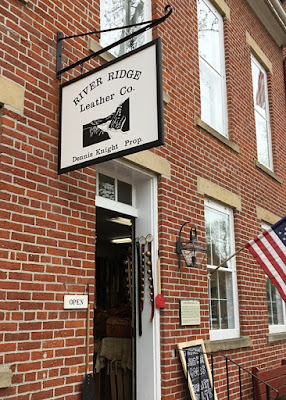 You can find a variety of other goods and eats scattered among the roughly 20 shops and restaurants which line Roscoe Village's main street. While we weren't specifically looking for antiques, we found a few small troves scattered in the area in Roscoe's General Store and the Ohio State of Mind outlet. 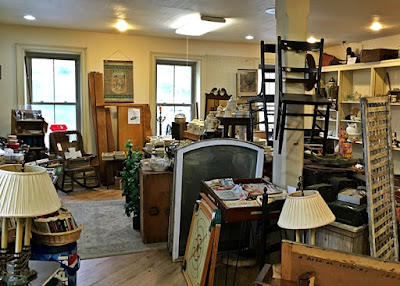 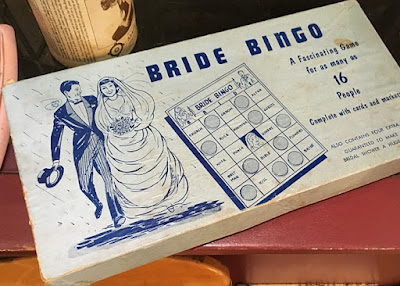 A few free historic exhibits are also available for viewing and exploring, including a section that includes the Caldersburg Pearl, a genuine canal boat actively in use in the 1840s. 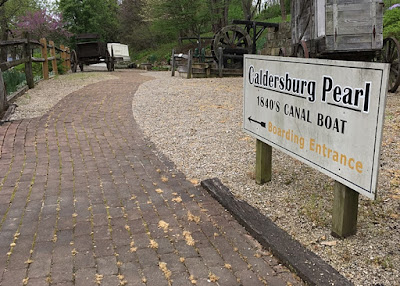 On the way back to the Columbus area, we decided to drop in for a visit to one of the latest arrivals to Licking County's craft beer scene and the Columbus Ale Trail in Newark's DankHouse Brewing. 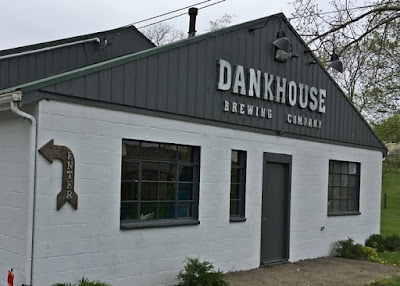 Opened by the Josh and Heather Lange to the public in November 2017, DankHouse has been welcomed with open arms by the community, already leading to expansion of both their parking lot and their brewing capacity to meet the demand. 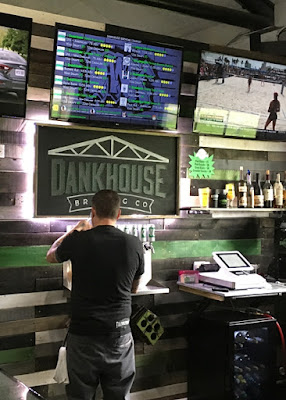 For us, the feel of the place both inside and outside reminds us nearby Homestead Beer in Heath, though in Homestead's case they had time to grow into what in our opinion is one of Ohio's underrated breweries (an opinion which is shared by others, as this article in Rick Armon's Beer Blog notes.)  Both breweries have a simple, functional building surrounding on a fairly large plot of surrounding land, with visible brewing equipment and some space for hanging out outdoors. 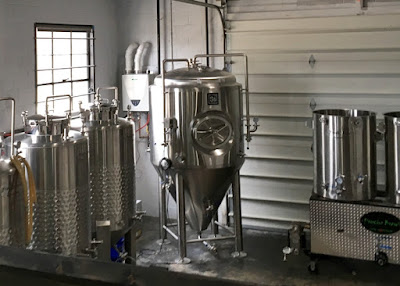 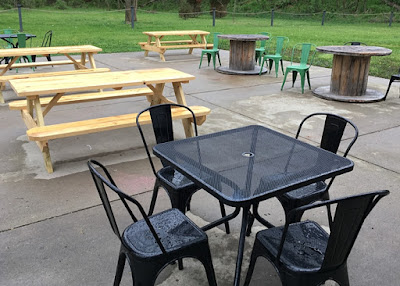 While DankHouse has shown the skill to brew across several styles (their Coffee Drip is one of the better coffee-based stouts I’ve had recently), IPAs are at this moment DankHouse's calling card.  Their Couch Kush'n, Chasing Trees, and Super Fantastic were all worthy takes on the most ubiquitous of craft beer styles.

If nothing else, DankHouse appears to be a worthy member of a strengthening Licking County craft beer scene, joining a collective of breweries from Buckeye Lake to Newark, and Granville to Heath that are all worth a visit or three.

Note: the original post had some initially incorrect information for DankHouse. That has been corrected.