First, before we delve into the pizza, let us dive a little into history: the Village of Worthington was established in 1803, roughly a decade before Columbus, Ohio's capital city, was established. Divvied up from a plot of 16,000 acres purchased by James Kilbourne from the Scioto Company, the village of Worthington was built to mimic the layout of many New England towns, consisting of just over 160 lots of land around a central public square and gathering place.

Despite its relatively early start in the Buckeye state, Worthington's population and area growth was fairly slow-going until the years right after the end of World War II, and largely spurred on by its capital city neighbor to its south. Recognizing the increasing flight of people from the inner cities to the suburbs, Columbus officials, spurred on by then Mayor Jack Sensenbrenner, decided they would counteract this by simply outgrowing its neighboring towns by way of annexation of all the unincorporated land they could get a hold of.

By 1950, the Village of Worthington still was modestly populated, especially compared to its capital city neighbor (2,000 versus Columbus' 375,000.)  The biggest move during the next several decades lay in the village's annexation of the larger Colonial Hills Subdivision, a merger that allowed Worthington to become an incorporated city. A number of annexations followed, including the Frank Lloyd Wright inspired Rush Creek, Worthington Estates and Olentangy Hills, but when all was said and done this city of just over 15,000 these days is basically an island in the sea of Columbus.

So you're probably asking what the heck this has to do with the pizza density, if you will, of current-day Worthington. Well, it's certainly easy enough to simply count the number of pizza sellers within the city limits, divide the number into the population, and get a numeric figure, but I soon realized that really wouldn't tell the whole story.

As is evident from the Google Map above, Worthington has a fairly ragged border from all its annexations over the years; I remember wondering early on where exactly the town started and ended during my first travels through the area. Pizza places you may think of as being of Worthington aren't, and vice versa.

Let's take the Colonial Hills neighborhood, which lies in the southeast portion of the city. Two popular, logistically easy to get to, and completely worthy pizza destinations just lie outside city limits at the intersection of Sinclair Road and Lincoln Avenue in Columbus old-timer Pizza House and newcomer Leone's Pizza. Similarly, a more formal dine-in option lies within easy reach in the Worthington-based Natalie's Coal Fired Pizza (again, another favorite of ours) or old-school Italian Villa Nova, a mere one block to the south but within Columbus city limits. 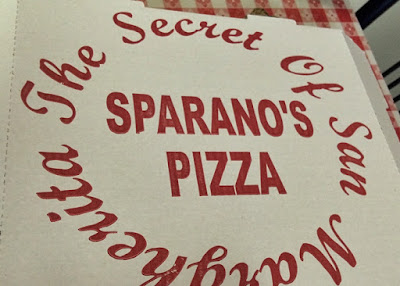 Home area leanings are not necessarily a driver for buying a pie...unless they are.  I bet if you ask the folks on Trabue Road in the San Margherita area near the old Marble Cliff Quarries, they might let you know that the Heavy Duty from Sparano's Pizza fresh from the oven is heaven defined.  Those who grew up near the Steubenville area eating Ohio Valley-style pizza (a style in which the toppings are added after the crust and sauce is cooked) of the state might sate their cravings at Hilliard's DiCarlo's Pizza. My spouse herself has a special place in her heart for Toledo-based Marco's Pizza, especially their great-for-late-night-munching subs.

So how to go about this in a meaningful way, I pondered.  After some thought, I came to a conclusion: why don't I just map out all the pizza places in the metro area and see if I can figure out where the pie hot spots are in the area.  Should be a relatively quick endeavor, right?

Silly, silly me...best if you order your favorite pie and tune in on the next blog post.