The process seemed simple at first - click, add, repeat...click, add, repeat - until I realized that the map I was creating was turning into a cluster to navigate. A truckload of seemingly random blue markers does not a good reference map make, with nothing to distinguish a standard chain (Domino's) from one of note (the Short North's Paulie Gee's) from a local favorite (the campus area's Adriatico's). In addition, the increasingly lengthening list of places on the map index had no real organization to it - alphabetical order may be boring but it in this case was badly needed.


I didn't write this blog post to be an elongated primer on how to create a Google map, but suffice it to say, a new strategy was needed to make this a reality. Over the next several weeks, I subdivided the places into logical group layers (National Top 100 Chains, for example), diversified the icon colors and icons themselves, and painstakingly alphabetized each list (a tedious drag and drop affair.)

So, without further adieu, this is what resulted: the big map of the Greater Columbus Pizza-politan Area:

A few notes: this is intended to be a map that is continuously edited until, well, I don't feel like editing it anymore.  As you may see in scrolling through the layers, there are already some changes, with various closures that have been logoed with the dreaded "X" (such as PizzaRev).  I figured for historical purposes I'd keep the closures around until a new pizza place took over the address. I probably also missed a few places - any additions that you the reader might want to put in will definitely go under consideration.

You'll also notice some places that are undergoing transition with a violet color - these places include Bono Pizza (adapting to the food truck model with the closure of their brick and mortar), Adriatico's (set to be relocated once the planned demolition of their current location takes place) and Plank's Bier Garten (still awaiting reopening after their December 2016 fire). 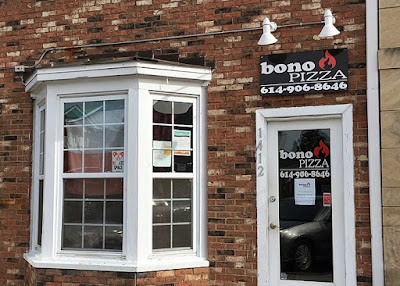 One of the fun things was doing some research on some of the places mapped and digging up various media and blog sources both old and new.  Links to posts from numerous local bloggers (especially the local guru of pizza in the venerable CMH Gourmand) are added to various locations to add variety; at the minimum, I hope to include add at least one relevant link to each place mapped over time (this is still an ongoing process.)

Finally, I want to state that my map is imperfect, and its imperfection is an issue that may never be fully resolved. My main goal was to include places that were takeout pizza places, or whose menu was really centered on pizza (Pizza House and Natalie's Coal Fired come to mind.) When it came to Full-Service Restaurants, I reached a bit of a conundrum. I had intended to only include traditional Italian joints like Villa Nova and TAT Ristorante di Famiglia.

But then I thought about the great pizza that the Short North's Forno has while also realizing that their menu that goes well beyond pizza. It seemed ridiculous to leave them off the list (I did leave them on), but then soon realized shortly after that a truly time-consuming effort awaits me if I wish to complete this particular level. I mean, how can you really include every such restaurant which happens to have pizza, from the fancy (Marcella's), to the fast food realm (Fazoli's), to the "who woulda' thunk" field (Yogi's Hoagies and Be Fit Cafe.) This layer I will add to over time, but I'd like to hear your best pizza from these types of eateries.

And then something more philosophical crossed my mind - many restaurants tout flatbread as an item: should that count the same as pizza? How about the unique hybrid that Viiza, which is slated to arrive downtown this year; should that qualify?  And what about grocery/specialty retailers like Costco, Sam's Club and Giant Eagle, who do tons of business in both fresh-baked and take-and-bake pies?

So I guess in the end, the original question of whether Worthington is the pizza capital of Central Ohio will remain unanswered. However, I think what resulted from that quest should prove useful in searching out your own personal hot spots (a couple that come to mind for me reside in the Pizza House/Leone's pairing in Salem Village and Rubino's and Bexley Pizza Plus in Bexley).

Also, I hope it will encourage your own sense of exploration to seek out a previously unknown pie spot for you.  Will Brice's Little Sicily's creations strike new chords of red sauce love in your heart?  Perhaps Franklinton's Josie's has a everybody-should-get-this-pie that few outside the area know about?

To paraphrase a travel blessing I've heard often, may the dough rise up to meet you, may the spice be always in your sauce, and may the cheese melt upon your face. 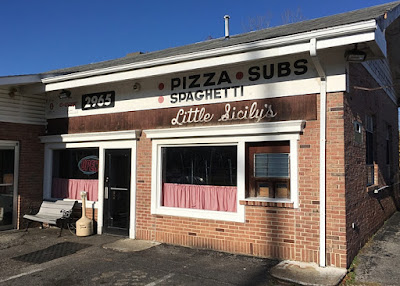