Wine Country in Recovery: When You Can Beat 'Em, Cooperate 'Em to Death (Pt. 1)

Perhaps the most indelible images to those like me who intently watched the progress of the California wildfires in October came from the city of Santa Rosa.  Early on, the Tubbs Fire, which started 12 miles as the crow flies in the Napa Valley near Calistoga, rampaged southwestward over the coastal hills powered by powerful offshore winds, and in less than two days had reached and inundated both sides of the concrete barrier/transportation artery that is Highway 101 in northern Santa Rosa.

In many ways, the footage reminded me of what happened just over 25 years prior, when a small grass fire not properly extinguished was reignited by the Diablo Winds and blew up overnight, ravaging the hillside homes just above Oakland, California for two straight days. Watching scenes of ash fluttering down on Candlestick Park during a 49ers-Lions broadcast proved to be the final confirmation of how serious the situation had become.

In the end, 4,600 homes and buildings (including the longtime house of the city's favorite son/cartoonist Charles M. Schulz) were lost in Santa Rosa alone. As we traveled up and down US 101 through the northern stretches of the city, blackened rubble and charred plant life was still plainly evident on either side of the roadway. But as we learned from casual conversations with folks we met during our travels, the situation would have been far worse had it not been for the stalwart efforts of the firefighters and other emergency personnel and cooperation from local residents and businesses. 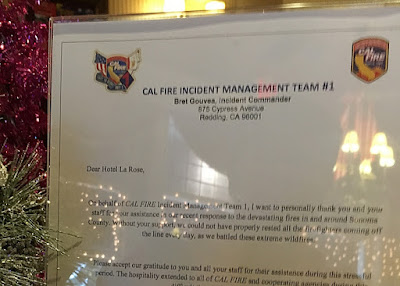 This was evident at our stay for the night at the historic Hotel La Rose, where a letter from the members of Cal Fire Incident Management Team #1 was proudly displayed at the front desk area amidst all the lovely holiday decor. 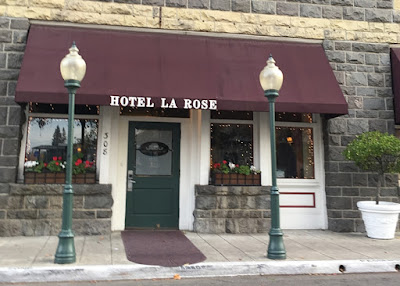 Residing in the historic Railroad Square area of downtown Santa Rosa, Hotel La Rose has been catering to guests for over a century, offering 47 rooms at a range of prices that are pretty comparable to more contemporary lodging scattered throughout the city, and offers a good central location for any Sonoma-area tourist excursions.  Our base-model queen bed room in the main hotel served our needs quite well, and we would definitely stay here again given the chance. 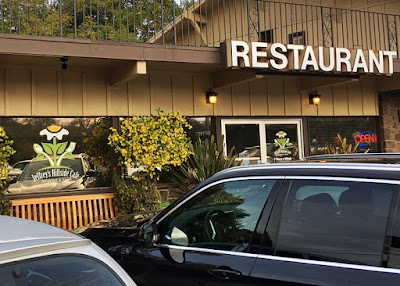 As we discovered, Santa Rosa's breakfast options are heavily diner-oriented. Many of them came with good solid recommendations, so we opted for a place that sported a few items beyond the usual diner classics in Jeffrey's Hillside Cafe. 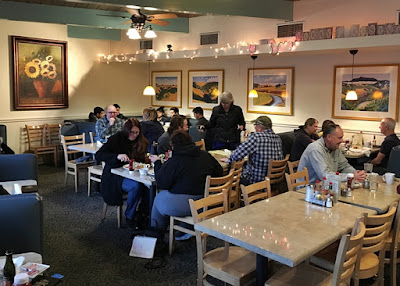 Cooking up breakfast and lunch at this eastern-located and otherwise modest hotel diner may seem a long way from the fancy meals owner Jeffrey Madura was preparing for years as head chef of locally heralded John Ash & Co., but Madura made sure that he brought a little bit of that with him when he opened up this restaurant in 2009.  Regular items like a Tofu Scramble and the two daily hash specials offered this day (Brussels Sprouts and Bacon, or Smoked Chicken and Butternut Squash) are reminiscent of what you might find at a place like Columbus' Northstar Cafe. My spouse normally chooses between the Chilaquiles and Corned Beef Hash more often than not, but on this day the Corned Duck Hash called her name. Duck has a very strong taste profile, and in this case, the corning process did a lot less "quacking" through (yeah, I know, bad pun) that very rich flavor profile. With that said, my spouse enjoyed this variation enough that she would definitely like it as an occasional change up to the usual corned beef hash. 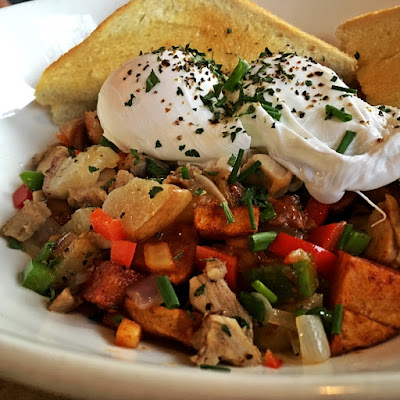 On the other hand, thoughts of Upper Arlington South of Lane's and their Bourbon Pecan French Toast entered my mind with my order in the diner's Sticky Bun French Toast (my "own" Joe's Special was also tempting, but I was a little O.D'd on eggs from prior morning's breakfasts.)  Jeffrey's version was not quite as decadent  and didn't quite as picturesque as South of Lane's, but the taste was pretty much spot on perfect.

Other bonus points included my accompanying fruit bowl, a standard grape/cantaloupe/pineapple/etc. blend that California's longer growing season made taste more lively than typical, as well as the relatively modest prices for tasty dishes in a typically higher-priced portion of the country.

We close part one of this look at Santa Rosa with a quick look at one of our most trusted sources for craft beer and other adult beverages in Sonoma County in The Bottle Barn, which opened its doors in 1990.

On this particular visit, we found craft beer bottles from locals like Russian River and Barrel Brothers, Sacramento area breweries Bike Dog and Track 7, and Firestone Walker's Barrelworks, and plenty of nationally recognized brands including Ohio's own Jackie O's Brewing. While in some cases its better to go to the source for specific gets (for bulk cases of certain Russian River beers, it's better to go straight to their downtown brewpub), The Bottle Barn is one of your best bets in the area for a one-and-done shopping excursion.