In the increasingly muddled world of what defines a craft brewer, the August 2017 news related to San Francisco's Anchor Brewing threw more haze into the equation. Essentially, the purchase of this craft beer pioneer by Japan-based Sapporo Holdings technically made Anchor a craft brewer no more, at least according to the current Brewers Association definition.

For many craft beer aficionados, the news was disappointing to say the least and, as a long time resident of the Bay Area, it had a similar effect.  With that said, it wasn't surprising, knowing the company's numerous struggles to keep its foothold within its home port (something we learned on a tour of the main brewery roughly eight years ago, ironically just before longtime owner/brewer Fritz Maytag’s sale to an investor group was widely known) as well as get its brews out to a larger audience. In a weird way, it made the brewery's new Anchor Public Taps space, advertised on Anchor Brewing's website as a "new pilot brewery and bar" and "one-of-a-kind San Francisco experience" a must visit on our recent travels to California to see what was going on. 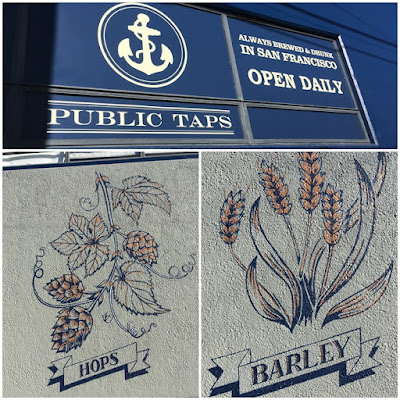 Located right across from the company's headquarters/brewing facility in the Potrero Hill neighborhood, Anchor Public Taps’ space mostly strikes the right notes vibe-wise. Outside, artistic renderings of beer’s basic ingredients (and, no, rice isn’t one of them, despite what one ad from a particular macro brewer would like the public to believe) act as de facto murals, and on this Day, a food truck (unsurprisingly, one of the many taco trucks that operate within the city) stood at the ready for hungry visitors. 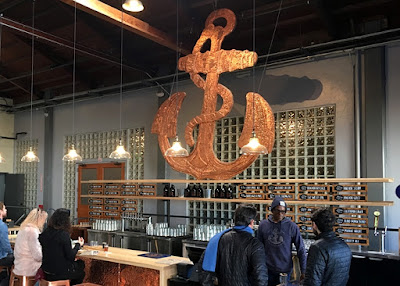 Public Taps’ interior reminded us of a warehouse or a building along one of the city’s piers. Copper tones are prominent in the tap area, with a huge anchor construct dominating that space above. Fermentation tanks and other brewing equipment for the taproom-exclusive brews line another wall, while other brewery standards like barrels for aging and a vintage beer can also be seen. 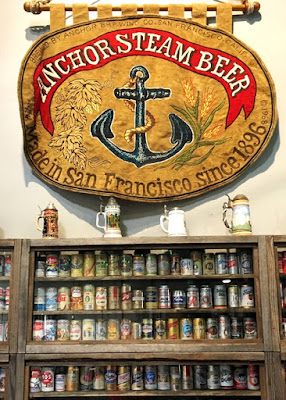 Perhaps the only weird sight we found was a souvenir photo booth, where patrons can print out a series of Anchor-related selfies for a few bucks. This device seems much better suited for the city’s well-known tourist trap attractions versus a brewery. 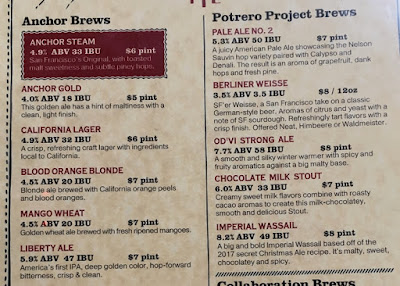 The tap list consisted of Anchor Brewing flagship brews (including their famed Christmas Ale in their standard and barrel-aged versions), plus taproom exclusives as well as collaborations with Brewery Ommegang and a fellow local in Thirsty Bear Brewing.

After conferring with our taproom hosts (who were all very pleasant and welcoming), and having had many of the brewery's flagships in the past, we stuck with the seasonal and taproom exclusive brews and were nicely pleased. Especially memorable were the brews built around the brewery’s famed and yearly-changing Christmas Ales (the 2017 Imperial Wassail and the 2016 Ale ages wine- and whisky-barrels) as well as their malty and delicious Od’vi Strong Ale. 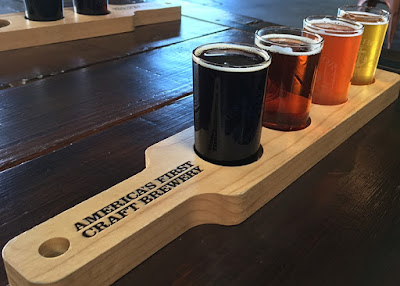 After finishing our brews, we wandered over across the street to check out the gift shop in Anchor’s main space. In many ways it felt exactly like our first visit here, from the check-in downstairs to those gorgeous gleaming copper kettles from yesteryear down to a large group finishing off their journey through the brewery with brews in the tasting room (unlike our visit several years ago, however, the tour is no longer a free affair.)

In the end, our visit to Anchor was a pleasant one, ownership changes inside.  As for the future of Anchor, the speculation of one lone blogger isn't really going to matter too much. But as someone who grew up in the area, I feel this brewery's most important asset is not necessarily the beer (our experiences have been positive with their brews) or even its (technically former) craft beer status but rather its identity as an original, a San Francisco born-and-bred company.

While the "locals only" exclusivity is well long gone by now (by 1982, Anchor beers were available in at least 20 states), Anchor's long time association with its home port is a special one steeped in history and fond memories. If Sapporo's plans for Anchor somehow erodes that association over the next few years, then this entity, to paraphrase the name origin of one of my favorite Ohio-based breweries, devolves into "just another f**kin' brewery."

In that regard, I wish Anchor best wishes on its journey into uncharted waters, and hope that a future visit (eight years forward or not) is equally as pleasant.