One thing I will always love about California is the weather, in that it generally is much less an impediment to exploring Mother Nature's wonders than elsewhere.  With solidly fair weather in place throughout our California stay, we figured a couple of day trips to do some exploring were in order.

Geographically, the casual observer might think at first glance that the Point Reyes peninsula looks as if it were being cut in half by the Pacific Ocean. That notion is more correct than they might suspect, as the San Andreas Fault runs right along where Tomales Bay lies. Essentially, anything east of the bay is going south toward Los Angeles, while anything west is creeping north toward Alaska. What this unique clash of land masses creates is a bevy of interesting sights for the visitor. 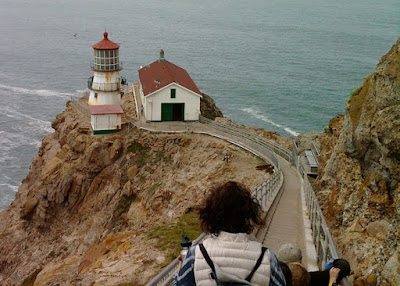 A must destination for any visitor resides in the Pt. Reyes Lighthouse. Featuring a daunting walk to and from (a stairway of 300 steps, the equivalent of 25 stories), this historic lighthouse kept ships from the treacherous rocks below for more than a century before the U.S. Coast Guard retired the it from active use in 1975.

The National Park Service has since had the job of preserving the structure since then, creating a quaint little visitor center and accompanying Ocean Exploration Center, an observation deck (great for watching whales offshore during migration season), and a great view of the ragged cliffs below. 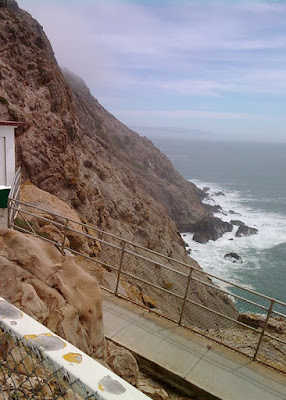 Unsurprisingly, there are your share of beaches to walk and explore. Drake's Beach, considered Sir Francis Drake's probable landing spot during his 16th century journeys, features calm waters due to its sheltered location with sandstone cliffs which jut into the water. 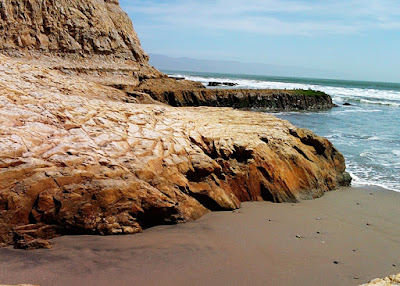 Meanwhile, the directionally named North and South Beaches offers visitors an encounter with the Pacific Ocean. Vigorous waves mean an extra bonus in the form of a free show as the local surfers ride the incoming swells. 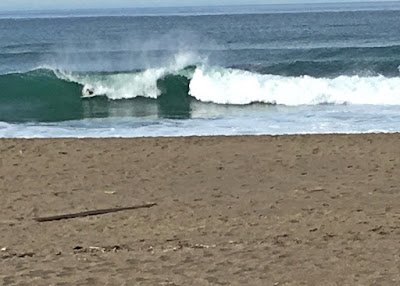 While we have not been there, perhaps the real gem lies just south of Wildcat Beach in the southern portion of the seashore - those who are willing to take the recommended route (13 miles round trip) will catch sight of Alamere Falls, a waterfall that essentially cascades into the Pacific Ocean.

Farther north, a non-descript road leading to the North District Operations Center gives you a prime photo opportunity and a peek at history.  The road itself leading up to the center is lined by Cypress Trees, leaving an increasing tunnel effect as you go farther down the road. We couldn't have picked a better day to visit, as numerous factors combined to give us this peaceful stretch of road to ourselves for a couple dozen minutes. 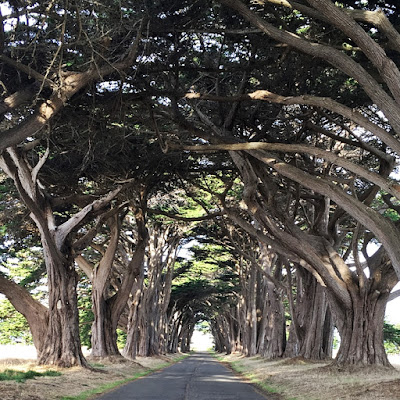 The building at the end of the road was not open on the day of our visit, but is no less fascinating a destination. Built in 1929, this art deco structure, designated RCA Coast Station KPH, was an upgraded facility to a network built by famed long-distance communication pioneer Guglielmo Marconi fifteen years prior, which brought wireless communication to the Point Reyes area.

Amazingly, the original communications equipment contained within the building remains functional, and restoration efforts undertaken in 2000 preserved records and artifacts of the entire network during its lifespan. This past is resurrected annually in their Night of Nights, which commemorates the day which the last official Morse Code transmission was made from these stations.

Of course, a good meal to start these Pt. Reyes travels is pretty imperative, and on this day we stopped in Marin County to an eatery that combines the talents of two food-oriented ultrarunners. 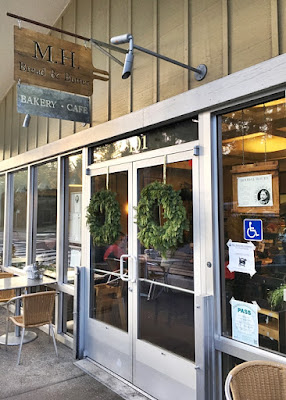 Nathan and Devon Yanko, the pair behind M.H. Butter & Bread (M.H. is a reference to Nathan's great-grandfather), are a multi-talented couple whose love of long-distance trail running has lead to appearances some of that rarefied realm's most prominent races, including 100-milers like Ohio's Burning River, Colorado's Leadville, and perhaps the granddaddy of them all in the Western States Endurance Run.

The Yanko duo also excel in the world of food as well, with Nathan spending eight years as baker at the world-renowned Tartine Bakery in San Francisco and Devon sporting her own successful personal chef business before establishing their San Anselmo restaurant. 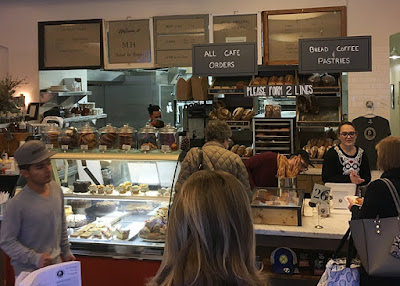 Even on what would be a holiday getaway day for many locals, M.H. Bread and Butter was buzzing when we got there. The eatery sported a helpful setup for the grab-and-go'ers with a separate line for those grabbing a bakery items and a coffee to go.  Off to the side, a separate station constantly cranks out all the breads, muffins and other tasty looking oven-baked items for the day's orders. 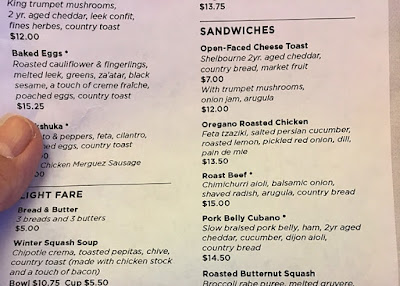 While the restaurant menu leans heavily to more healthful fare, and concentrates on using local sourcing as much as possible, most of M.H. Bread and Butter's items feature Nathan's bread-making skills to one degree or another. Not surprisingly, the bread was part of our menu items we ordered this morning, such as the Fried Egg Sandwich that my spouse ordered.  This simple-sounding item delivered an elevated experience, combining that bread with avocado, bacon, and two-year-old cheddar with a and roasted tomato basil aioli. 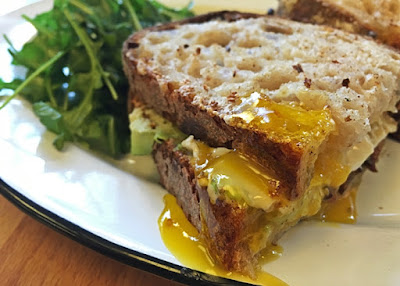 Meanwhile, my Baked Eggs featured lovely textured eggs (maybe the best since the ones I had at the now defunct L'Appat Patisserie in Olde Towne East) with a couple slices of country toast.  That country toast reminded me of some of the best breads I've had in both the Bay Area (Tartine and Acme) as well as Columbus in Dan The Baker.