Three For The Road: Until We Meet Again, Bay Area... 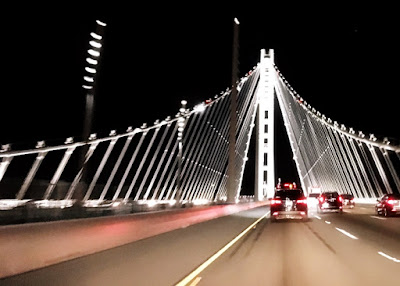 As is typical, our Bay Area travels covered a number of random delectable destinations around the region, and we'll be closing this extended series with three of those places, covering the worlds of craft beer, coffee and ice cream. 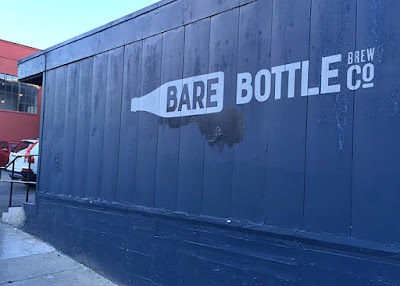 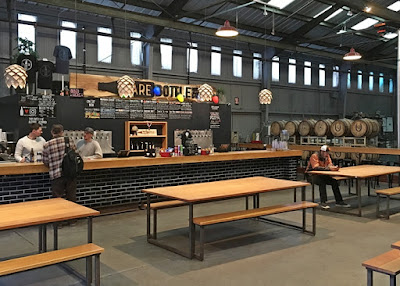 Considering the premium for space in the 49-square-mile area that is San Francisco, Barebottle is a fairly large space, probably one of the best for taking a fairly large group over on a whim for a few beers or renting out a side room for a raucous holiday party (as we heard quite clearly during our visit.)

All the hallmarks of a warehouse-style brewery are found here at Barebottle, from rotating food trucks outside to barrels and fermentation tanks inside, a tap area replete with hop-shaped lamps and a crowler machine, plenty of communal benches, and a space where the kids can keep themselves entertained with cornhole and other games. The closest fit space-wise in our minds in Central Ohio brewery resides with Springfield's Mother Stewart's. 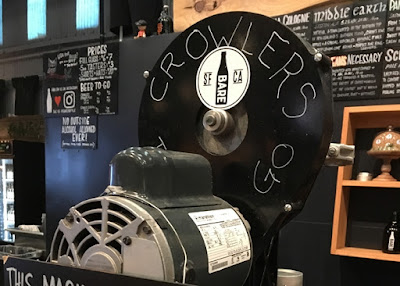 Barebottle sports a variety of styles on their menu, with their share of hazy/New England IPAs (their current menu sports four; on the day of our visit, there were two in their Very Best Bad Things and Unicorn Dust) We did like the the latter IPA (it definitely would appeal to those who love Mosaic hops) and the taproom exclusive Barrel Aged Bad Magic (a combo of barrel-aged honey brown and imperial stouts) well enough, but it was the pucker of the Guava Tart Monster that provided the most satisfying moment for both of us. 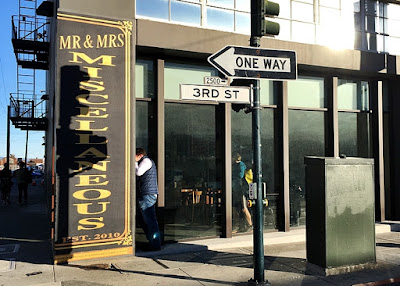 Mr. and Mrs. Miscellaneous - I had mentioned this San Francisco scoop shop in a dual blogpost last year with Cincinnati's homegrown Hello Honey, but in some ways I felt I had given the Mr. and Mrs. a bit of a short shrift without a recent visit. Having missed out on some ice cream action on our holiday travels two years ago, my spouse was more than willing to join me on a visit to their Dogpatch neighborhood location. 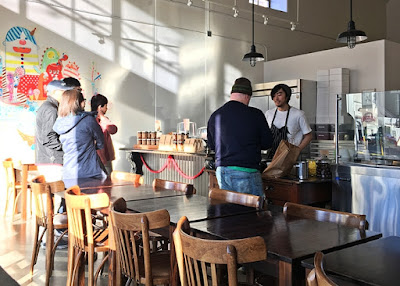 Out of the ice cream shops in Columbus proper, the compact and adorable Mr. and Mrs. Miscellaneous reminds me the most of the scoop shops of Jeni's Splendid Ice Creams.  The day's select flavors, often created on the whims of owners Ian Flores and Anabelle Topacio; in a way, the constants remain with the homemade candy and brittle confections. 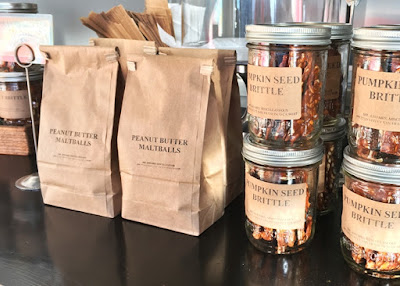 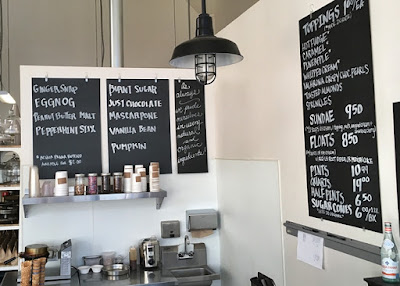 We can vouch that the love for the art of ice cream making that Topacio and Flores showed when they got their shop going is still alive and strong.  Their Peppermint Stix was a potent scoop, clearly made with oil versus the more common extract, and the Pumpkin was a good solid rendition as well. The king of the scoops this time around was the Peanut Butter Malt, which combined rich peanut flavor with a malt flavor that was more chomping on the lightly toasted malt used in brewing beer, with a pronounced caramel notes. With our own ice cream maker at home, this might be something we might try to duplicate ourselves in the future if at all possible. 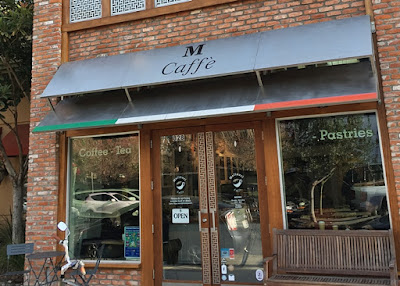 Molinari Caffe - with all the mention of the Wine Country wildfires in my recent posts, it's quite easy to forget that the city of Napa is still recovering from an earthquake, The 6.0-magnitude shaker, which struck early in the morning of August 24, 2014, was estimated to have caused $1 billion dollars worth of damage and economic losses for the area, including the red-tagging of more than 100 structures as uninhabitable.

That 2014 quake proved important in Molinari Caffe's history. Opened up in spring of 2012 in downtown close to the waterfront, the cafe's owner/namesake Rick Molinari made what looked to be a promising move in 2014 to a larger space close to the city's courthouse just before the earthquake hit.

As detailed in this Napa Valley Register article, while the cafe itself suffered relatively little damage, the buildings to either side were seriously damaged, initially shutting the cafe to close for a month-and-a-half. Further complicating things after the cafe's reopening was the street itself, which was blocked to traffic due to the scaffolding and construction equipment at surrounding buildings, making it difficult to let passers-by know Molinari was actually open. 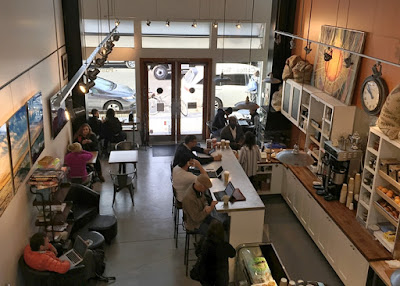 Despite the prolonged physical and economic peril, Molinari appears to have survived this crisis and, by the looks of things during our visit, has regained its status as a locals hangout. On the day of our visit, people were perched out on both levels of this cafe (the second level includes a small room that can be reserved for meetings) tapping on computers and tablets, or trading banter with friends and family over a cup of java. 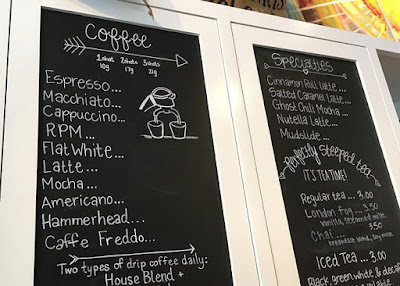 Molinari adds a couple twists to the typical coffee experience. One of these experiences is distinctly Wine Country in their wine-infused coffee beans, done in collaboration with local Bay Area coffee bean roaster Wild Card Roasters. Had we known about this before our visit, we might have grabbed a bag ourselves, but lucky for us (and anyone who wants to give this concept a try), the beans are available for online ordering and delivery. 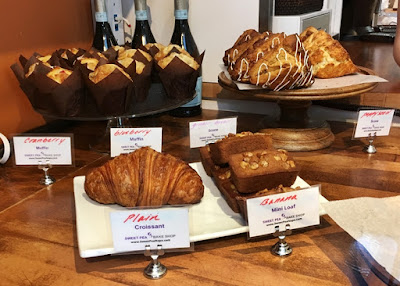 Perhaps more surprising is the listed Ghost Chili Mocha, something that sounds easy to overdo spicy-heat-wise. We were pleased to find out that the burn was pleasantly muted, with a light fruity floral flavor that played well against a not-to-sweet mocha.  Paired up with either a baked good from local provider Sweet Pea Bake Shop, from scratch Deviled Eggs, or even my spouse's Yogurt Parfait with Fruit, it made for a lovely sipper during a casual, hangout with nothing better to do (or really want to do) kind of day.