Dogpatch's Mr. & Mrs. Miscellaneous is a business name best said without a gob of their ice cream in your mouth. It has also been the subject of much consternation between my spouse in that we have never been able to work in a visit since my departure for the Buckeye State. Despite those personal frustrations, this shop, which was established and run by Wolfgang Puck's Spago Restaurant veterans and multi-racial couple Ian Flores and Anabelle Topacio since 2010, has risen and remained in the top echelon of ice cream purveyors in the Bay Area (earning "best of" mentions in Eater SF and Time Out SF for this year.)

Their daily allotment of flavors (about a dozen or so) is fairly sparse compared with many of their local competitors, but what they do offer at any given time are vibrant ones, from their basic vanilla bean to their numerous alcohol-laced flavors (Fernet Branca and their Pink Squirrel, featuring cherry ice cream with various liqueurs, among others.)  This low flavor offering doesn't mean the owners are afraid to experiment: one Facebook post back in 2011 noted they had created nearly 140 flavors in just over a year of existence.

Mix those in-house made ice creams with a potently alluring inventory of homemade brittle (something that I have missed since moving here,) and other sugary stalwarts like hot fudges, caramel apples, and cookies, and you'll find a place that's more than worth visiting for any ice cream aficionado. 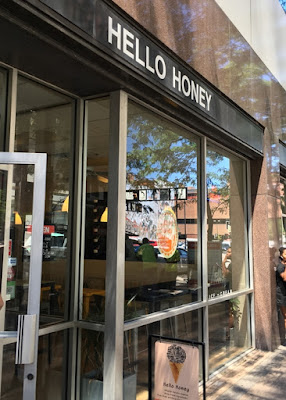 Meanwhile, the Cincinnati native, not to mention many Ohioans in general, could easily stay a Graeter's loyalist. Their small-batch French Pot ice creams have become one of my favorites as well since I started digging around their Bethel Road store in the Columbus metro. Being a Columbus area resident, I will admit to not knowing the Cincinnati food scene quite as well, but my gut feeling after visiting Hello Honey is that this shop is something of a hidden secret.

The downtown-located Hello Honey is pretty easy to miss, with a fairly modest size and no big fancy exterior facade or signage to tell passers-by of its existence. The interior is filled with earthy color tones for the most part, with plenty of chalkboard and stencil-styled graphics. 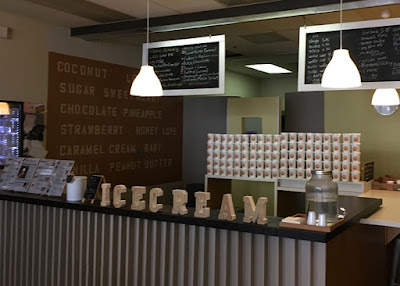 Hello Honey shares a couple of similarities to its West Coast brethren in Mr. and Mrs. Miscellaneous. Owned and operated by a multi-racial couple (Brian and Pook Nicely), this ice creamery keeps a fairly well-focused inventory of small-batch, scratch-made ice creams at any one time. In fact, both shops share their flavor updates in a similar fashion - photographs shared on their social media platform of choice in Facebook.

Hello Honey also has its share of other homemade treats. The smell of freshly-made waffle cones was irresistible, making me seriously regret I had opted for my usual scoops-in-cup option. The creations in-house theme continued as I wandered around reading their menus: for example, their Desserts Menu noted up to 10 minutes of prep time for the creation of some delicious-sounding creations. 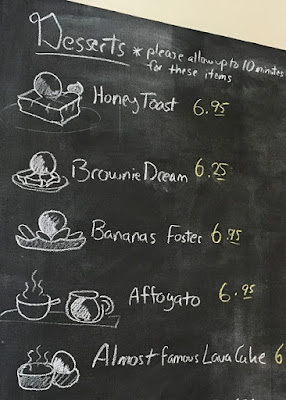 The ice cream itself was just plain good, not unlike the creations of the above-mentioned Mitchell's (San Francisco version) - extremely smooth with that mouth-coating texture the high butterfat confections typically have. versus that chewy, taffy-style I've come to appreciate with many of the ice creams I've had in Ohio. Without my usual butter pecan default, I went with a Brown Butter Caramel (a lot more subtle than I would've expected) and the extremely lovely Oh My Banana Honeycomb.  And I've discovered since my visit that an ice cream creation topped with a freshly Toasted Marshmallow ($1 extra) is not to be missed.

Let's just say we've got future visits to both in the works, and neither fog nor thunderstorm nor long distances shall keep us from our appointed duties.