Columbus
('Ques) The Greater Columbus Antique Mall - this antique store, located the edge of three prominent area neighborhoods, was the mall that kept on giving. I didn't think there was much to it during initial walk through, but not unlike German Village's wending The Book Loft, a passageway here and a passageway there leads you into seemingly unexpected rooms and additional building levels. After awhile, you wonder if you're not a little bit like Alice going through the antique wonderland as you try to wend your way back to the entrance.

Overall, you'll find a pretty balanced collection of antiques covering all manner of interests and pocketbook sizes at what seem to be fairly decent prices. Oh yeah, did you know that this building is possibly haunted?  That creaking sound you hear may not be the floor after all

(Brews) CD102.5's Big Room Bar - oh, did you know that after 6 PM, the store's parking lot is available for CD102.5 patrons?  Use this knowledge to visit The Big Room Bar, which is owned and operated by locally beloved independent radio station CD 102.5. Featuring a Monday through Saturday happy hour, The Big Room Bar offers some local craft beer taps, cocktails, and a select appetizer type menu while listening to their some alternative music sounds, both on air as well as live performances from nationally-known and local favorites.. 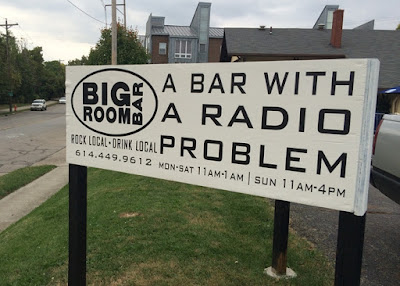 Akron
('Ques) The Bomb Shelter - This nattily attired and arranged store, in a somewhat more remote section of The Rubber City, is a retro and industrial decor lover's dream. I admit I was so entranced by the items within that I really didn't remember to snap any photos until I got back outside.  Even the intimidating stare of this green greeter (as posted on the store's Facebook page) couldn't dissuade us from roaming around and admire the collection inside. 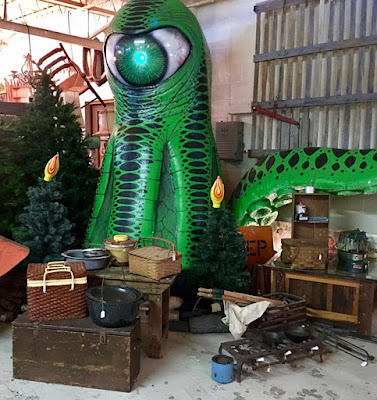 Throw in some religious artifacts as well as a pretty good collection of quality records (I generally focus on the really inexpensive gems on my vinyl collecting, but I will fork over cash for a well-maintained record at a fair price) and you have yourself one of the more unique antique shops within the entire state 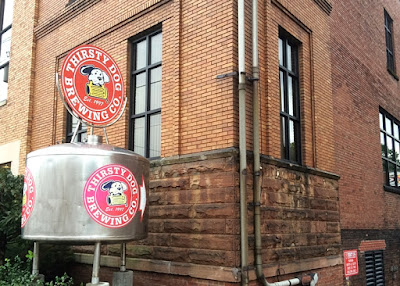 (Brews) Thirsty Dog Brewing - not only is this the closest major Akron-area brewer to The Bomb Shelter (R. Shea and Hoppin' Frog are fairly hefty drives in comparison, though completely justifiable), but you also get to drink your beers inside an antique of a building in the historic Burkhardt Brewery, which for numerous years was run by a woman (Margaretha Burkhardt, who successfully ran the operation for four decades after her husband died of blood poisoning.)

Every now and again, you'll see workers or equipment scoot through the taproom - after all, the taproom space is actually within the building itself and not a specially constructed addition. Now celebrating twenty years in operation, Thirsty Dog offers up great beers in an atmosphere of brick walls, stacks of barrels, and plenty of history as you belly up to the bar