Much to the chagrin of tourism officials, Nebraska is not a top destination for many who live outside the state (according to this September 2015 Thrillist article, Nebraska ranks as the 8th least visited state in the U.S.) It would not normally be ours, but The Cornhusker State would be our arena for viewing an event which hasn't happened in this part of the world since 1979. The breadth of it was also unique: not since 1918 had there been a coast-to-coast total eclipse, and of course the U.S. population has boomed quite a bit since that event.

My spouse and I scoped out this eclipse more than two years ago, and at first we puzzled where to go to view it. The easiest thing to do would be to head south into states like Kentucky and Tennessee to view this celestial event. More grand summer-type vacations would take us to one of Wyoming and Yellowstone National Park or along the Oregon Coast (one of our favorite destinations of ours), but we knew that would come with millions of others with that brilliant idea. Weather would be an issue: some places would be more prone to cloud cover than others (the Carolinas, for instance), an occurrence that would wreck years of preparation.

After months of only general strategizing, the plans came together quickly: a brother of my spouse with Nebraska connections had their own plan to meet up with friends and family on his wife's side of the essentially out in the middle of Nowhere, Nebraska. We mentioned we were traveling to see the eclipse and asked if we could join them. Thankfully, they happily agreed, and the Cornhusker State would be our hosts for viewing this unique event.

The travel down to our the state was unique: sure there were locally plated out on the back rural roads, but they seemed outnumbered by the out-of-towners like us. Vehicles from the Dakotas, Iowa and Minnesota were fairly common early on as well as a smattering of Atlantic states. Even plates from the Canadian prairie provinces (Alberta, Manitoba and Saskatchewan) were spotted in multiples during this part of the drive.

As we arrived at Interstate 80 and proceeded westward toward Grand Island and beyond, vehicle plates turned decidedly to Texas and predominantly Colorado. Just an educated guess, but many Coloradans I figured thought the Nebraska to the east offered more viewing opportunities than even more rural Wyoming to the north.

Not surprisingly, with closer eclipse destinations available to Ohio residents, our state license plate was something of a rare sighting on both these days. 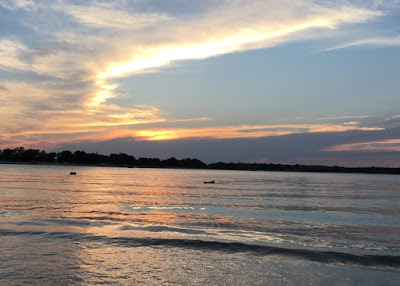 Lake McConaughy, perched just north of the town of Ogallala, looks as if someone took a massive trebuchet to a chunk of beach along either coast of the country and flung it backwards into the Plains. A water reservoir in reality, Lake Mac (as the locals call it) provides fine sand beaches, all manner of water-based activities, and waterside camping (you can even bring your vehicles onto the beach, but be sure you have 4-wheel-drive) in a somewhat unexpected spot.

The beach was also surprisingly uncrowded: we had mentally prepared for jammed-packed beaches and tons of tents filled with eager eclipse seekers, but we had our little spot on the beach pretty much all to ourselves. Even better, the weather was perfect for a night of hanging out with friends and family, with clear skies and little in the way of light pollution providing a view of overhead stars, flying and orbiting objects and even a shooting star or two as a pit fire roared along side.  We were hoping this was a good omen for tomorrow as we turned in for the night. 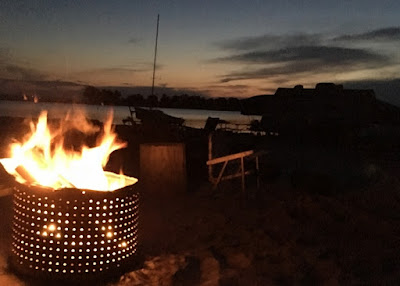 Eclipse morning found us on the fog-shrouded hills of the Marin Headlands. At least, that's what it felt like (save for the hordes of cattle which roam freely over this land now) as we headed our way into the more remote range lands of the state. As we snaked our way northward, we were joined in short order by 15 other vehicles, more likely than not out-of-staters like us.

We knew there were some prominent gatherings relatively nearby: many eclipse chasers made Alliance their destination of choice, due to the rather unique roadside attraction/work of art in Carhenge, using junked automobiles to mirror the structure of the world-renowned Stonehenge. Meanwhile, the community of Tryon had their "Eclipse in the Sand Hills" event, which matched vendors, a barbecue cookout, Old West styled events, and spaces for camping for attendees.

But perhaps it was the tiny town of Arthur which proved to be as revealing a statement of this event's magnitude as any. As we crept through, we found the very modestly-sized fairgrounds area bursting at the seams with campers and other equipment from those who had stayed the night. Zombified visitors who didn't come equipped with cooking equipment and/or wanting a hot meal wobbled into and alongside the highway toward the couple of establishments that appeared capable of delivering caffeine and sustenance.

At what appeared to be an auto garage, several vehicles from surrounding counties encircled the building, with official personnel seemingly mixing small talk with serious chatter about the potential "what ifs" this day might bring. The coda resided in an electronic road sign just outside town limits, warning all travelers that no services would be available for the next 75 miles. 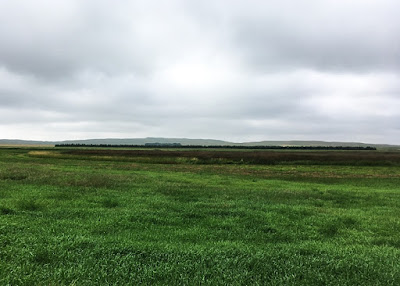 Before we knew it, our car was meandering up the dirt road which led the way to our hosts this day. As we trudged forward, I realized it had been awhile since I'd been somewhere as remote as these ranch lands. As we soon discovered, all the land we could see, totaling in the thousands of acres and including cattle, troves of wildflowers, a small lake, and a line of pine trees (great protection for cattle during the winter months, I was told), belonged to our hosts. There may be more rural properties out there, but this was definitely no slouch in that department. 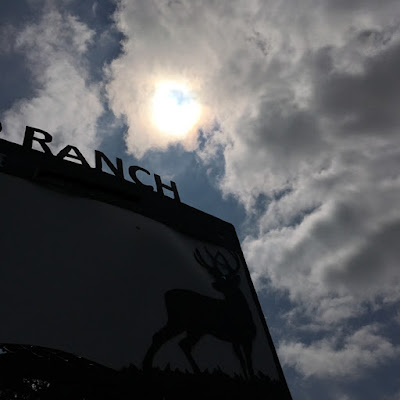 There had been rumors of up to 50 people showing up, but it turned out to be roughly half that, a perfect number for this gathering. Many people here were relative strangers to my spouse and I, but our hosts were exceedingly gracious and we all had pleasant time with all gathered exchanging stories and occasional gentle ribbing, mostly in the sports rivalry vein. Adding to the special nature of this day were the three folks who would be celebrating a birthday on this very day.

We had bought extra viewing glasses just in case, especially in light of potentially dangerous eye wear in circulation, but many other guests had done the same, meaning no one would go wanting. 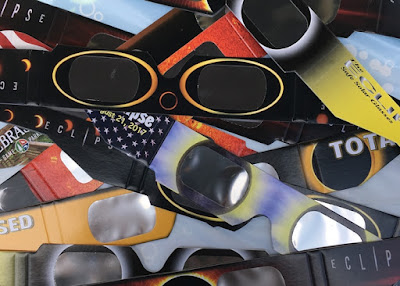 The overcast had proven stubborn throughout most of the morning, but the Sun finally burned it away to reveal sharply blue skies just before the Moon started making its trek across its face. As the minutes ticked off and the Moon's presence grew more prominent, the resultant sunlight grew hazy and the shadows below us grew sharper. 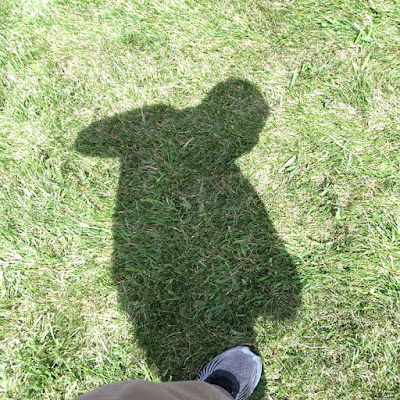 The weather forecast had called for partly cloudy skies during the afternoon, but the prediction seemed to be a bust until about a half hour before, when the few tiny wisps that had floated by multiplied both in size as well as in number. Anxiety levels grew as zero hour approached - would Mother Nature cooperate with our small gathering?

Just one minute prior to full totality, a sizable cumulus cloud which had masked the spectacle above for a couple minutes drifted just enough the now truly hampered Sun above us, followed by a sizable gap of clear sky.

Glasses were donned, and gazes drifted upward. And then, darkness. 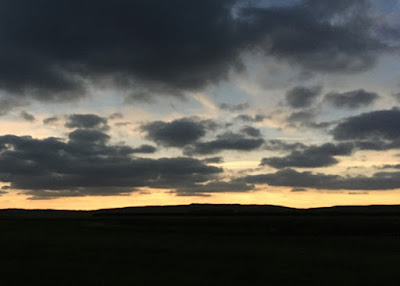 And those formerly worrisome clouds perfectly framed the magic above. 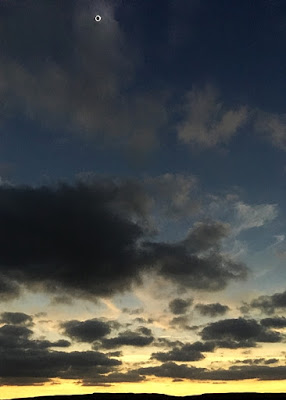 After two minutes of collective oohs and aahs, and mostly failed attempts to capture this event with sub par camera and video equipment, it was time for more celebration. A true Nebraska-style (and quite delicious) lunch of grilled brats and burgers and chili, along with other fixings, came out for lunch, followed by a birthday cake and the opening of presents.  For us, though, this was the end of festivities - s much as we would have loved to have stayed, our plans meant we had to start the trek back home by early afternoon.

As we started the drive toward home along some back roads, we felt both elated as well as drained; from here on out, we knew our vacation was in serious wind down mode. I can imagine many of the folks we encountered in the long line of vehicles closer to the Interstate felt the same way too. 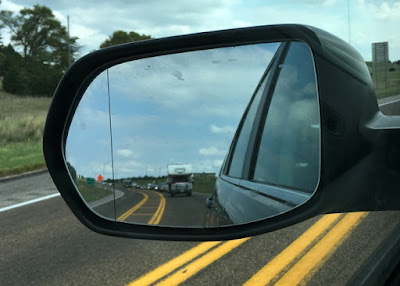 It was real, Nebraska. Hope some of you make it out to Ohio on April 8, 2024, when the next total solar eclipse cuts right through the heart of the Buckeye State.