Way back in the days when the native peoples roamed the lands of what would become the state of California, the Bay Area unsurprisingly housed acres and acres of natural wetlands. These spaces, vital ports for migratory birds of all types, remained relatively untouched until 40 years California achieved its statehood, when officials thought these "useless" wetlands would be better used to supplement the state's burgeoning agricultural industry.

Cullinan Ranch, a 1500-acre parcel of former tidal marsh, like many of its surrounding wetlands, was diked off for those purposes. Later, a proposed marina community development in the 1980s and threatened any chance of full restoration, but the proposal was ultimately defeated and led to the land's sale back to the US Fish and Wildlife Service for that very purpose.

This visit of ours was definitely an on a whim notion - I had driven past these lands along Highway 37 hundreds of times without paying it much mind, with a vague notion that maybe I'd stop and see what's here. But with our Wine Country tours being our only planned big touring on this California visit, this first ever visit promised to be the perfect day trip. 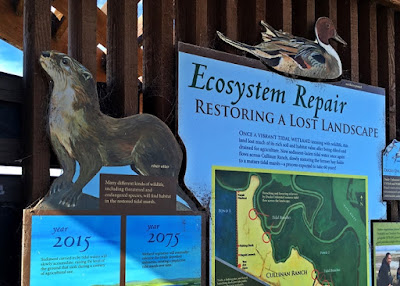 In reality, these wetlands are just beginning the process of restoration; a helpful display at the beginning of the pathway detailed that this would be a 60 year process to get things back where they had been.

The trail map proved to be a bit deceiving in that the one road in and out was a lot longer than we had figured.  In this case, we didn't mind - the sky was lovely, the sun was out, and gradually the sounds of wildlife dominated the vehicles whooshing by on the highway we just left. 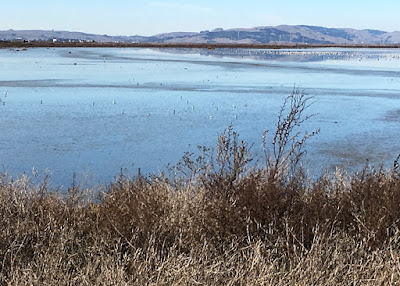 This is the type of place where you just let nature take over your senses.  The movement from birds, including stately blue herons, skittering shore birds, and numerous varieties of ducks was a constant throughout our trail walk.  Every now and again, that would be interrupted by random sightings, such as the lone fisherman trolling along the water's edge seeking out the day's dinner... 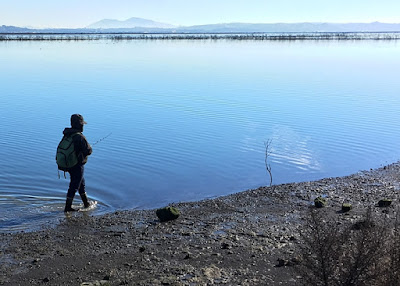 Or the random clam shell perched in the middle of the roadway, no doubt dropped from high up by a hungry seagull to get at the tasty interior... 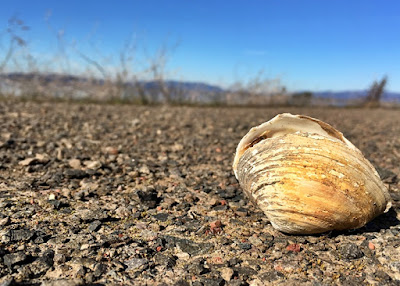 Or reaching the path's end, standing, and taking in one of the many sloughs that meander through this area. Experts say that 100,000 acres of these tidal marshes are needed to ensure a healthy ecosystem, and if Cullinan Ranch is any indication, that target is more than a worthwhile endeavor. 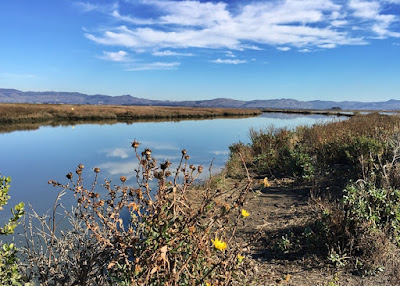 After enjoying nature's charms, we decided to dive into another first-time experience for both of us:  the Christmas festivities at the beloved Berkeley institution Saul's Restaurant & Delicatessen. 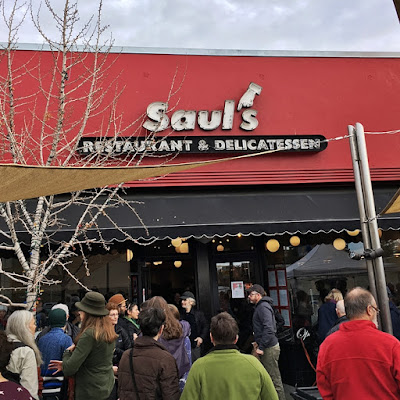 Opening its doors in 1986 in Berkeley's Gourmet Ghetto neighborhood, Saul's is currently owned by Peter Levitt and Karen Adelman, who took over operations a decade later. While Saul's is modeled after a traditional Jewish delicatessen, the restaurant has not been designated as Kosher (per an article in the Daily Californian, Adelman states Saul's is a "celebration of Jewish secular culture.") This status has not prevented the crowds from flocking in to sate their hunger pangs, with the Christmas Day throngs being perhaps the ultimate evidence. 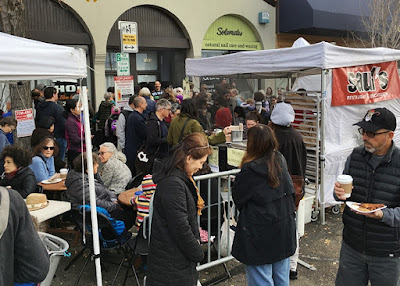 In what has become a tradition, Saul's entertains thousands of people wanting a break from the traditional Christmas eats and/or wanting to hang out with friends, family and strangers. For those who don't want to endure the wait to dine in, Saul's offers two to-go options in their delicatessen counter as well as their outdoor stand where folks can walk away with easy to carry items like latkes and bagels. 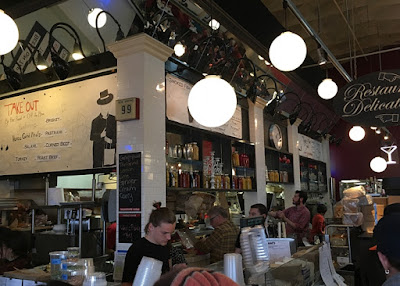 For folks who did like us (we arrived in the early afternoon and were told to expect an hour-long wait), tunes from a 10-piece klezmer band helps people pass the time away (and, if you're so inclined, burn off a few calories while dancing.) 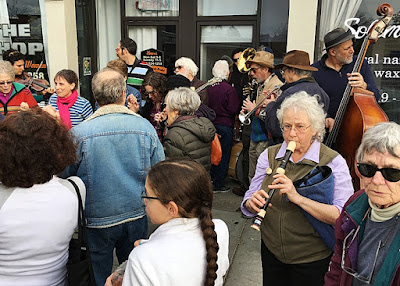 The interior of Saul's is roomy and functional, with little touches of the restaurant's history in photos and other framed media along the walls. 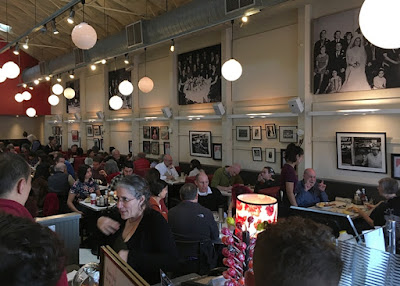 Saul's starts those who dine in with a plate of pickle spears: these all had something to recommend them, from what tasted like a fermented pickle to a Polish-style pickle with plenty of garlic taste to a nice crisp tangy dill pickle. 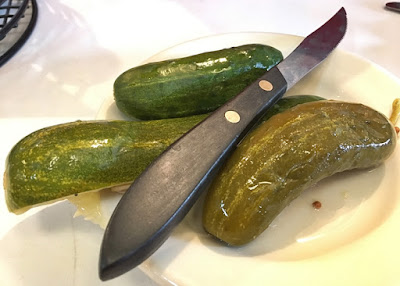 Saul's features a selection of house-made sodas and phosphates: both our selections (Fresh Roasted Ginger, featuring caramelized ginger root, and Tamarind) were refreshing and just sweet enough to match their base flavors. 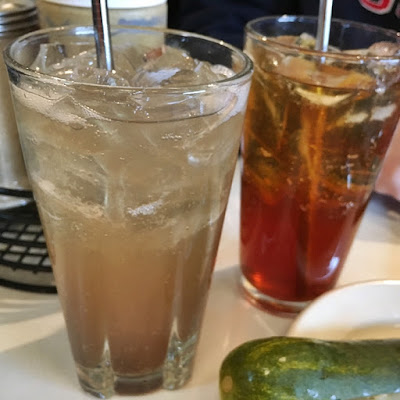 The menu at Saul's had plenty of intriguing options that we had never encountered ourselves such as the Malawach Yemeni Pancake (a Jewish flatbread served with a variety of toppings) and Kasha Varnishkes (buckwheat groats with noodles), but we were here for the sandwiches, all served with bread from one of the best bakeries in the country in Acme Bread.

My Corned Beef Sandwich with Potato Salad was a decent enough affair - we prefer a little more spice kick with our corned beef, so I guess it's just a matter of preference. On the other hand, my spouse definitely earned the definitive thumbs up in the culinary choice this day. We've heard many raves about Saul's house-made pastrami (in its early days, the deli sourced this from New York but brought the process in house with locally sourced ingredients in 2010) paired with a nicely fried latke with applesauce, she couldn't have been happier. 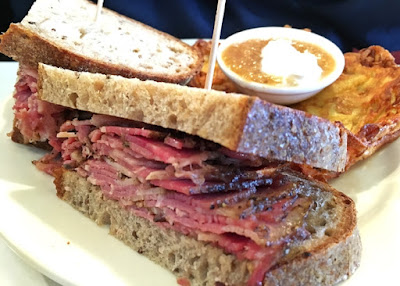