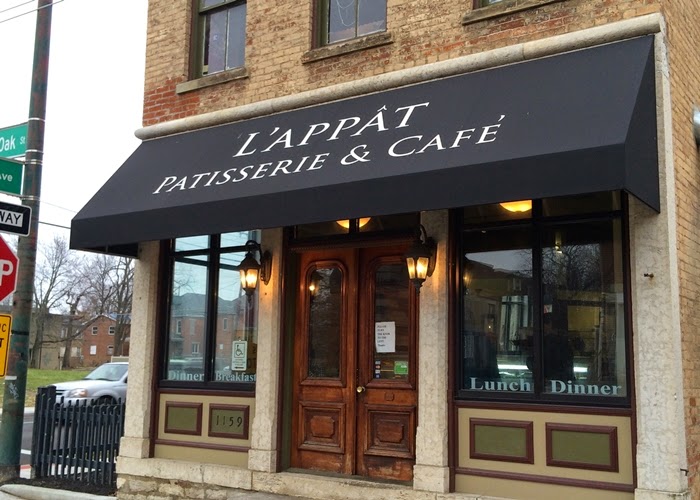 Like people, restaurants operate at various speeds. Those geared to efficiency (e.g. fast food restaurants) will get your food to you quicker, but the odds that you will receive something distinctive in the food itself or the experience go down. Those factors reverse when you have a restaurant that operates at a slower pace: ideally, you get will get a much more fulfilling and satisfying experience from the longer time spent at the eatery.

L’appât Patisserie & Café falls in that latter category: while their various unique bakery goods (their nicely flaky chausson pastries are a definite treat) are available for those who have to grab and go, we found that there was nothing like hanging out and spending some time at this quaint eatery in Olde Towne East.

It's amazing to think L'appat qualifies as a bit of a veteran in the fast-evolving Columbus restaurant scene. This Olde Towne East location, the third eatery of husband and wife team Didier and Minervia Alapini, has been open since November of 2011, after two other attempts to establish eateries in both south and Downtown Columbus in 2005 and 2008, respectively. The third time appears to be the proverbial charm for the Alapinis, as they have formed a solid cuilinary core of restaurants in the area along with folks like The Angry Baker and Yellow Brick Pizza, among others.

We dropped by on a lazy Saturday morning with a friend to enjoy their breakfast items and were seriously tempted by the visually delectable items in the pastry case. However, we resisted the temptation of these sweet treats and decided we were more in line for a substantial breakfast.

L’appât Patisserie & Café's interior offers nothing too extravagant; nevertheless, the space feels cozy and comfortable. I have never been to a formal afternoon tea service, but the service we received that day from Minervia made me think that we'd get similar treatment in such a place. In a polite yet welcoming manner, our hostess meticulously explained our dining options (L’appât offers a select weekly menu covering all meals except for certain special days of the month; more on that later.) This sense of formality was accentuated by the white porcelain service ware which accompanied our coffee and food, and some actual free samples of the cafe's sweet teas on a white dish. We also got the general sense that there was no need to hurry away: we would be more than welcome to sit back and stay awhile.

Our guest and my spouse ended up choosing the Mexican Potato Platter ($9.50 w/sausage; $9 for the veggie), whereas I exercised my sweet tooth with an order of their Vanilla Beignets with a side of strawberry preserves and cream for $6. The beignets were perfect in their imperfection, coming in a stack of randomly irregular, powdered-sugar-coated nuggets of lip-smacking goodness. The preserves and cream proved to be a perfect complement. 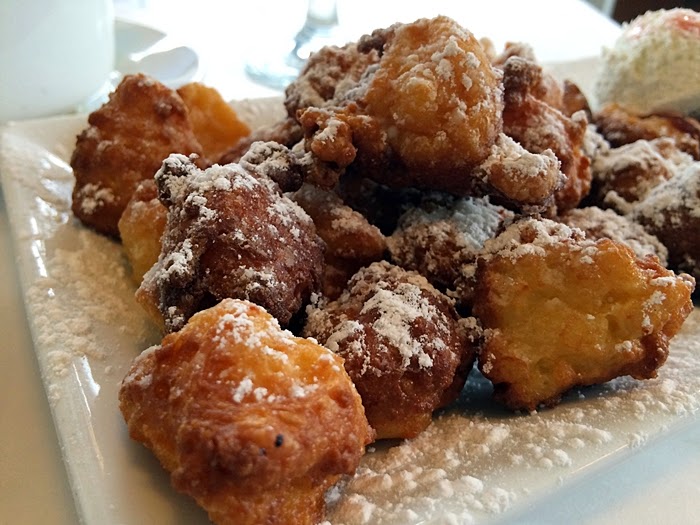 The Mexican Potato Platter far exceeded its description on the menu. Simply described as "Potato served with omelet (with) sauteed vegetable in tomato sauce," the potatoes were delightfully herb-laden, and the saute infused the vegetables with that redolent and pleasant sweet tomato tinge. And if we could regularly make a simple egg omelet as silky and airy as the ones that we were served, we'd seriously consider opening our own breakfast place.

As we were finishing up, Didier made an appearance at our table. We had read before about his engaging nature, and his loquacious personality came to the fore as he asked us how our meals were and explained a little more about his restaurant's and his own history, A native of the West African nation of Benin, Didier also let us know about his rotating menus, including a Pan-African menu on Thursday, and the fact that he could offer a specially-catered dinner for larger groups. For the latter, all you had to do was give him advance notice.

No need to convince us; regardless if we can scrounge up a dozen or so buddies of ours, a dinner date here is definitely on the docket. And I'm sure many more lazy weekend days are out there for us to drop by their cozy establishment for some morning eats as well.

Update: L’appât Patisserie & Café closed its doors on its Olde Towne East location in May 2015. Based on my best guesses, Chef Didier is still putting his culinary talents to use on a private scale, with no word on any future reincarnation of his restaurant.
Posted by Joe