Not Enough Sours In The Day: The Rare Barrel (Berkeley, CA) 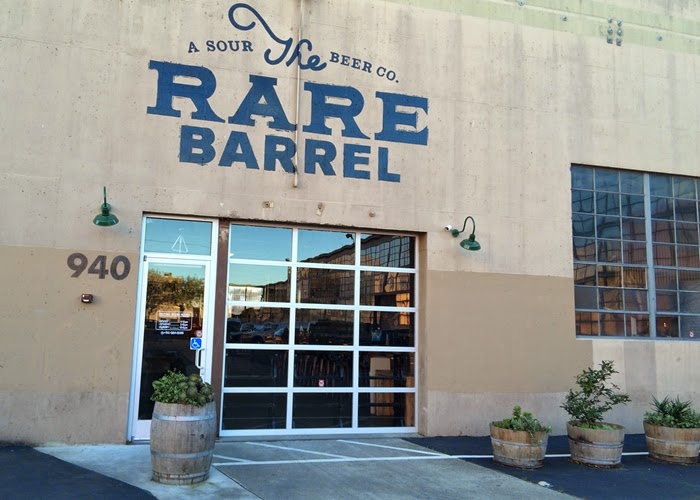 A style of beer that I have found to be somewhat uncommon among Ohio-based brewers is the sour beer. The excellent Jackie O's Pub and Brewery in Athens, Ohio, has produced some truly enjoyable beers along this line since their opening in 2005, but for the most part this is an under-explored style in the state as a whole.

In the Bay Area, I lived within fairly easy driving distance of Russian River Brewing in Santa Rosa. While Russian River is perhaps best known for its West Coast-style IPA dynamic trio of Blind Pig, Pliny the Elder and the much-hyped Pliny the Younger (whose annual brew it and drink it while it's fresh release mayhem is due to start), its repertoire of sours are among the most amazing creations that both my spouse and I have had the chance to imbibe in our mutual beer pursuits.

The Rare Barrel in Berkeley is unique in that their sole focus is barrel-aged sour beer styles. I had been aware of their brewery since they announced their intent to open in 2012, and it was going to be a close call as to whether their tasting room opening just after Christmas of 2013 would work out with our plans to be in California at that time.

As it turned out, we wouldn't be able to drop by during that visit. 2014 would be a different story, however.

We had arrived about 20 minutes before opening at their facility in southwest Berkeley; we figured we would be a bit conspicuous being so early, but felt a little bit more at ease when we spied one other car in the parking lot waiting for the brewery's opening. As it turned out, we were just the first two of a dozen or so cars with Rare Barrel patrons who arrived prior to opening time. My spouse and I stared at each other and remarked that there must be something good going on around here.

Essentially, Rare Barrel's interior is a huge warehouse space with the front third of the area devoted to the tasting room and customer seating; a kitchen offers customers a selection of grilled organic grilled cheese sandwiches served with a quinoa side salad (as we were going to grab dinner after our visit, we decided not to indulge in these.) While Rare Barrel's offerings are the main focus of the taproom, other locally-based guest brews and other beverages are also available for taproom visitors.

The rest of the space is basically geared toward the conditioning of their beer: sightlines are dominated by racks of oak barrels. Each barrel contains a variety of Rare Barrel's fruit-based brewed creations and will be aged from anywhere from 6 months to three years, depending on the style of beer and brewers' whims. As described on their website, their overriding focus is to "concentrate on learning as much as possible about the reasons why those unique flavors are produced in sours" and use that knowledge to explore "flavors through both conventional and experimental methods to create exciting new beers."

We found that the brewers of Rare Barrel are more than succeeding at their mission. Our first two pints brought us the crisp plum shadings of their Mad Plum to the black currant-laced blend of Shades of Cool. Our second pint pairing brought us two of their more complex brews: their Forces Unseen (Blend 2) is a blend of three golden sours which were brought under special fermentation, while the Apropos of Nothing brought a uniquely beguiling profile of elderberries and lavender to the forefront.

The proverbial cherry on top of the sour sundae came back in Ohio, where we opened up two bottles of Rare Barrel's beers that we had taken back from California. Both bottles of the Forces Unseen (Blend 1), which was basically the original three golden sour blend that was the base for Blend 2, and the apricot deliciousness of Map of the Sun were shared among friends and proved to be a highlight tasting for all gathered.