Charleston Choosing (Part 3): An Angel at Low Tide, and That's How It Gose

In a way, one of our brewery destinations in South Carolina was determined four years prior during a stop in the more northern reaches of the state in Greenville. Popping by the quite well stocked Greenville Beer Exchange for some suggestion of local South Carolina brews to bring back with us, the clerk introduced us to our first Gose beer.

We knew from the first sampling that this wasn't going to be everyone's bag, including this Thrillist author who declared that craft beer was officially dead with his first samplings of this style which originated in Goslar, Germany in the middle of the 19th century. However, this crisp, lemony and salty brew sat right with our taste buds, and we brought home two six-packs for consumption.

Our second brewery destination was a happy accident, a chance spotting on the way to see one of the oldest and, as it turned out, most entrancing living things residing in the eastern part of the country. 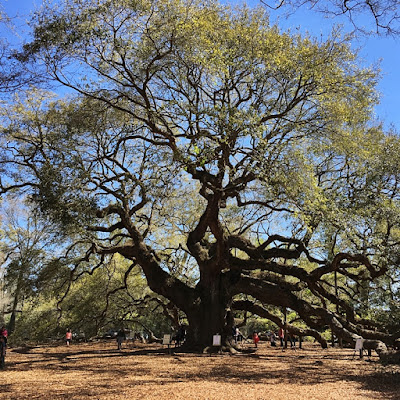 The breadth of the Angel Oak Tree, a Live Oak located on Johns Island, is about as striking as some of the Giant Sequoia trees we have seen on prior travels into Sequoia and Kings Canyon National Parks in California. The crown of this ancient tree shades over 17,000 square feet of ground underneath with its longest branch extending nearly 200 feet.  Estimated at roughly 400 years of age, the Angel Oak has survived numerous natural disasters from floods to earthquakes to hurricanes. 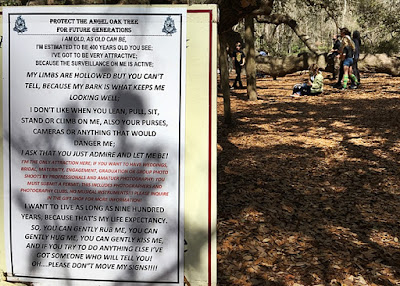 Signs posted by the City of Charleston (who runs the park in which the Angel Oak is located) ask visitors to be gentle with the tree as you wander underneath it. As you wend around and underneath the tree's tangled web of branches (some of which lurch underground before re-emerging), you notice the measures that have been taken to maximize the tree's life, such as well-placed support beams underneath some of the more massive limbs, the lack of Spanish Moss, and, if you look carefully enough, a lightning rod. Best of all, admission to see this wonder of nature is free, so there's really no reason not to stop by if you're in the area. 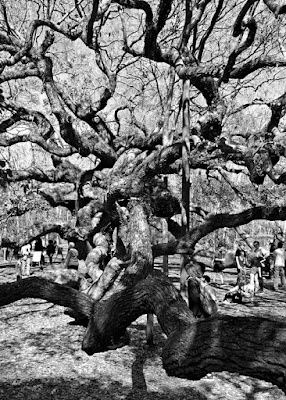 On the way in to see the tree, we spied a brewery operation off to the side of the road. With time in our favor, we decided to drop by on the way back. Not only did we have a nice experience, but we also discovered a delightful Columbus, Ohio connection. 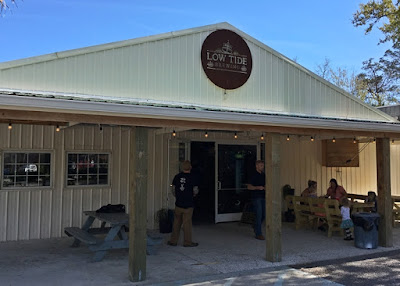 As it turns out, Low Tide Brewing's owner Mike Fielding credits one of Columbus' initial arrivals in the new wave of craft brewers with inspiration for making his brewery a reality. As noted in this Eater: Charleston article, Fielding notes that his friends at North High Brewing gave him the confidence that he could give the Charleston area its twelfth craft brewery. In partnership with head brewer Andy Elliott, Fielding opened up Low Tide in March 2016.

Driving into Low Tide's parking lot, the brewery's location and exterior reminded us a lot of Homestead Brewing in Heath, Ohio - an outdoor seating area with picnic benches, a fairly large parking lot, and a corrugated steel warehouse style building. As it turned out, the Low Tide's general vibe inside was very similar as well, with brewery equipment, a tap area, paired up with an accompanying, relaxed, low-key atmosphere. 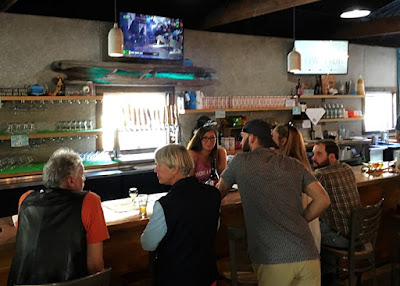 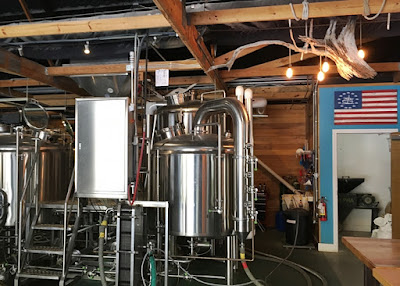 The presence of barrels was a welcome sign, especially when we found out that Low Tide had several sours on tap during our visit.  Sure enough, it was their Rock The Boat Hopped Sour and a very delicious Framboise seasonal sour brew that turned out to be favorites on the flights we ordered (bonus points to the wooden paddles, which are neatly shaped like surfboards.) 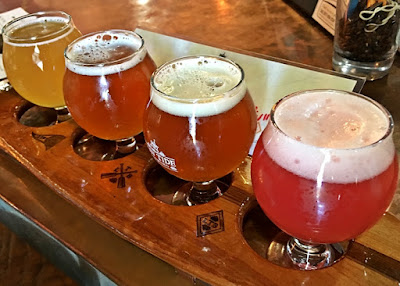 Earlier in the trip, we made our way to the manufacturer of that delicious Gose (still the best that we have sampled in our travels) in Mt. Pleasant's Westbrook Brewing. 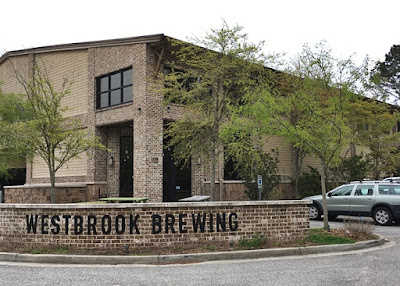 Founded by Edward and Morgan Westbrook in December 2010, Westbrook is probably best known for their Mexican Cake Imperial Stout. This stout, which featured cinnamon, cocoa nibs, habanero peppers and vanilla, had been brewed first for the couple's guests at their wedding reception. The reaction was so positive, Mexican Cake and all its variants became one of the brewery's flagship brews, produced right around the couples' own wedding anniversary every year. 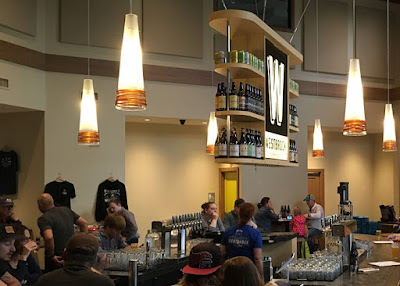 For a brewery that distributes in seven states and many countries in Europe, Westbrook's taproom is relatively plain-spoken (a few conical lights and a three-tiered shelf featuring some of the brewery's brews hanging overhead provide a little artsy flair) and modestly sized. A two-sided oblong tap area anchoring the middle of the space, with one chalkboard wall containing the beers on tap and another corner dedicated to merchandise and to-go beers. To the rear, the brewery's 30-barrel system can be seen through the glass-paned doors. 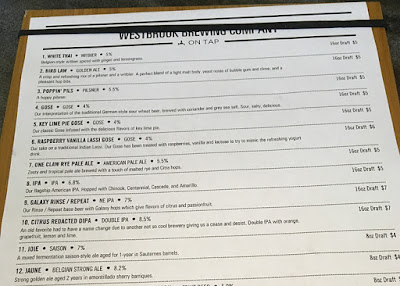 This plain-spoken nature of the taproom does help you focus on the main reason why you'd come to the taproom, and Westbrook had plenty of brews on tap, including several with famed gypsy brewer Evil Twin.  With the lone exception of their There's Nuttin' Butter Than A Nice Pair of Cam Pants Barleywine (which tasted to us more like a vanilla cream ale), everything was quite delicious, from their Kentucky Coffee Style Stout (great coffee flavor that avoids any astringency), to their cherry-delightful Fruit/Wood/Time featuring Montmorency & Balaton Cherry, and our favorite of the night in their Joie, a mixed-fermentation Saison aged one year in Sauternes casks that featured vibrant pineapple and honey notes.

And oh yes, a six pack of that favorite Gose of ours, and maybe a couple other bottles, made the journey back home with us to Ohio.