In the 1983 movie "National Lampoon's Vacation", the final sequence starts with the Griswold family's battered station wagon pulling into the vast (and empty) parking lot of their ultimate goal; the giganto-family amusement park Walley World. The head of the family, Clark Griswold (played memorably by Chevy Chase), parks the car about as far from the amusement park entrance as one could.  When asked why he parked so far away, Clark responds, "Right, right...and at the end of the day, when the lot's all full and everybody is fighting to get out of here, we'll be the first to leave."

Driving into the rather substantial parking lot of Heath's Homestead Beer (a member of the Columbus Ale Trail) gives you a touch of that same feeling. You can park seemingly far enough to run off enough a full beer pint's worth of calories to the building that hosts this Licking County brewer. But there's definitely no need to be a Griswold in this case. Drive up slowly and park close, and get ready to relax. The building exterior for Homestead's combination taproom/production space, opened in 2013, is non-descript enough to mistake it for a storage shed for the fairly substantial Central Ohio Aerospace and Technology Center building next door from afar. Only once you get closer can you see the picnic style benches and cornhole board; on certain days, the taproom hosts food trucks and/or live music events.

Inside, the visitor will find all the trappings of a production brewery as well as a decently-sized taproom, decked out with shelves of growlers, more tables and chairs, and beer-oriented media (including a cool reproduction lithograph of the former Columbus-based Hoster Brewing factory.) 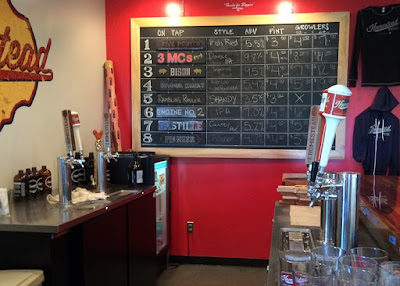 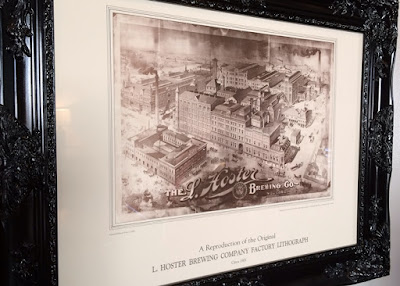 Despite the industrial setting, we got the distinct feeling of being out in the country while hanging in their outdoor area, far from the crowds, noise and auto traffic of the Columbus metro. The beer itself was also quite enjoyable and inexpensive to boot (most beers are at $3-$4 per pint): standouts were a refreshing Bastille Biere de Garde styled Country Ale and the 3MCs Double IPA (an IPA I would order on tap if I were on the mood.) A few folks seated on the benches next to us were enjoying their Rambling Radler shandies. Eventually, a couple of their four-legged friends they had brought along inspired some casual conversation among the gathered, making for a nicely enjoyable and perfectly lazy weekend day at the taproom.