Charleston Choosing (Part 4): Give Peace a Chance, and Sitting by the Dock of the Bay

Not surprisingly, coast-hugging Charleston is considered a hot bed of seafood, with numerous restaurants sporting all manner of sea creature creations on their menu. With its seasonally warm temperatures (the city averages 60 degree high temperatures in every month except January), Charleston has its fair share of frozen confection shops, from familiar chains (Ben & Jerry's, Haagen Dazs, and Kilwins), new arrivals (Jeni's, a brand very familiar Central Ohioans and growing in prominence nationwide), and local shops their own versions of ice cream, gelato, custard, and even the currently very trendy rolled ice cream variation.

On our Charleston trip, we got to dive into both, with some very tasty results indeed.


With Jeni's in our backyard back at home, we decided to forgo a trip (though we did make a point of checking out the storefront) and search for the most novel ice cream creation we could find otherwise. As it turned out, what we stumbled on was something of a "why didn't we think of that?" kind of moment - pie often goes better with ice cream, so why not a portable version? 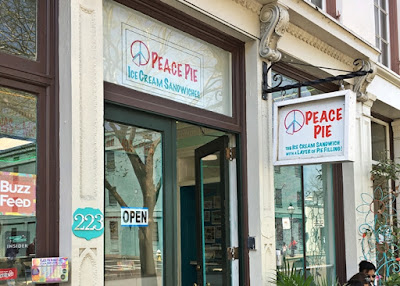 Peace Pie originated in the mind of Jerry Klause, who discovered that his "Pecan Pie Lasagna" creation he made for family and his friends might have some potential beyond the family kitchen in the form of ice cream sandwiches. After successfully selling their sandwiches at various festivals and events in southern New Jersey, their first brick and mortar opened up in 2015 in Cape May. In fact, their current six locations remain nestled along the Atlantic Ocean, from St. Augustine, FL to Ventnor City, NJ, with two of those being located within Charleston. 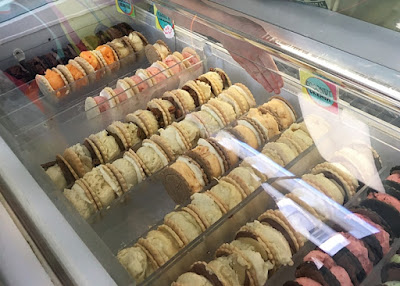 The setup is pretty straightforward - several cases of Peace Pie's "classics" (such as Salted Caramel Apple, Boston Creme, and Pecan Pie) along with those made with specialty ice cream flavors (their Toasted Coconut Caramel and Peanut Butter Brownie), along with seasonal flavors (a Pumpkin Cheesecake was highly touted to us) as well as "creatives" (what the heck for it combinations that are thrown together by request or the staff's whims.) Not everything is labeled, but the staff is more than happy to give you detailed descriptions. 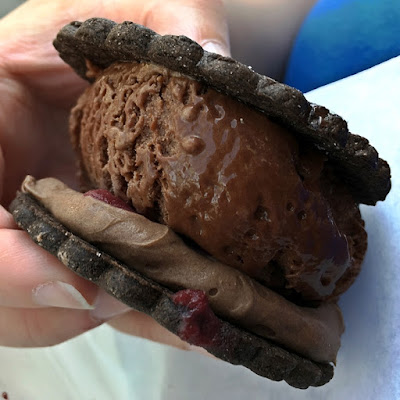 Donut and ice cream combinations might be the most decadent combo I've encountered in my travels, as exampled by Parlor Ice Cream Puffs in Sacramento, CA. These Peace Pie creations aren't too far behind, however, and mighty tasty in their own right. My spouse and I are pretty predictable in our choices, and that was the case here with my choice of Pecan Pie and her choice of Chocolate Cherry Pie.  These were the perfect reward for a good amount of walking around the pretty streets of downtown this afternoon, and they're worth a shot for anyone so inclined.

As Monty Python might say, and now for something completely different: 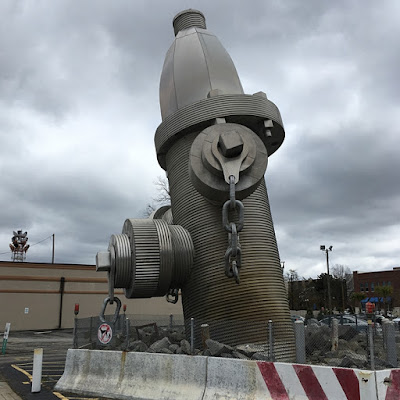 Okay, that's a little too different...how about this? 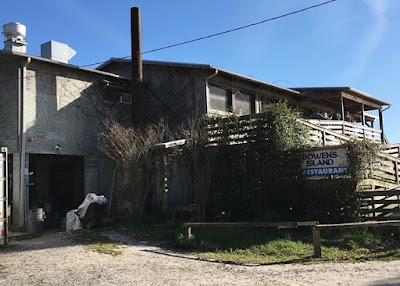 Dating back to just after World War II, Bowens Island Restaurant is a locals-oriented restaurant that has become an open secret of sorts with national exposure from places like USA Today and Adam Richman's version of Man v. Food.  But in a way, its off-the-beaten-path location (just a billboard marks the turnoff, something we had missed the first time around) on the way to Folly Beach probably mutes the crowds just enough to keep things at manageable levels, at least on weekdays.

Even though we got there just a half-hour after opening, the line extended fairly well down the switchback ramp up to the main dining area. However, things progressed fairly smoothly and relatively quickly, and we discovered a few valuable bits of knowledge from the more seasoned diners in line with us. 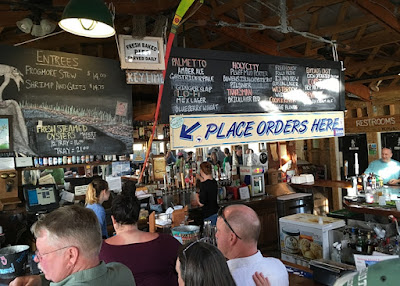 One important one and one I wholly agreed with: seat cutting (having any member of your party split off to "save" premium seats for all) was generally very frowned upon, and would subject you and your party being kicked out. Another one was what I dubbed the sauce corner: after you placed an order, you proceeded to the corner nearest the cash register to grab any sauces you might want for your order. This setup actually works to your advantage in that you don't have to cut through the line of later-arriving diners. Finally, the substantial craft beer selection available for those who wanted something more than the standard mass-produced macro lager was a nice find indeed. 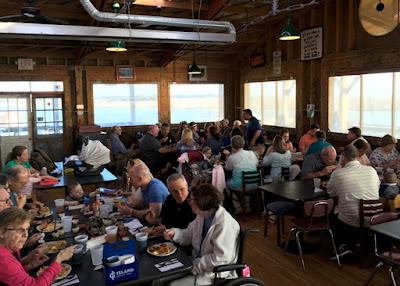 This restaurant will never strike anyone as fancy, with scribbled inscriptions and graffiti on its barely finished wooden walls, and a blend of mismatched chairs and tables, but that's perfectly in the image that this restaurant wants to project. While the interior has this ramshackle charm (there are actually more rooms in the lower sections of the building you can nestle in for your meal, as we later found out), the deck is the place to be, especially if the weather is cooperating and offering you a sun-drenched view of the nearby estuary. 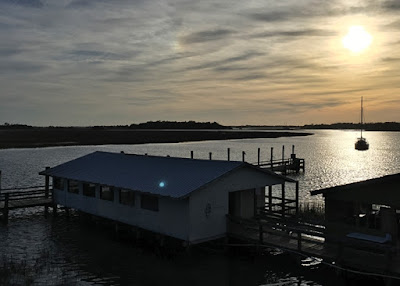 Oysters are the real get at Bowens Island (we saw several happy-faced folks with plowing through piles of these bivalves during our stay) but we were a little too tired to deal with shucking, so we opted for other seafood delights.  My Shrimp and Fish platter was exactly the no fuss-no muss dish that I wanted (the accompanying hushpuppies were quite excellent), and my spouse was delighted with her first taste of Frogmore Stew, basically a Low Country style boil featuring shrimp, potatoes, a very nicely spicy sausage, and corn on the cob.  All told, it was a perfect end to our Charleston travels that day. 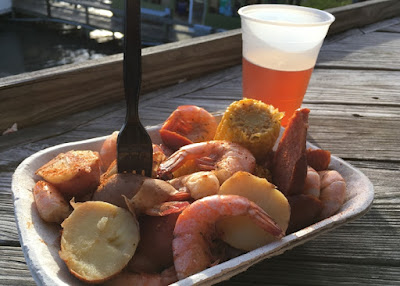