Columbus residents traveling down to Savannah should be aware of another Greek-owned institution selling delicious sweet treats.  In this case, this local gem, Leopold's Ice Cream, is less than one year removed from celebrating a century's worth of providing tasty frozen confections for local residents and visitors alike. 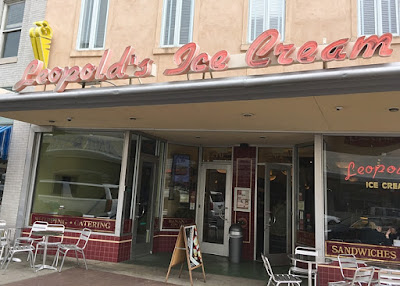 Learning their trade from an uncle who had previously emigrated from Greece, brothers George, Peter and Basil Leopold set up their first shop advantageously at the intersection of two local streetcar lines. Their current Broughton Street shop was officially opened to the public in 2004. 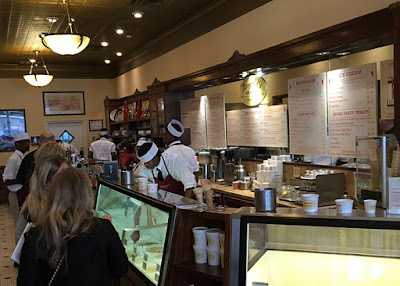 In terms of past ice cream experiences, Leopold's reminds me of a blend of Johnson's Real Ice Cream in Bexley with a little of Zanesville's Tom's Ice Cream Bowl from a Central Ohio perspective, with items like sundaes, floats and hand-crafted fountain sodas joining coffee drinks and sandwiches as menu options along with straight up ice cream scoops. 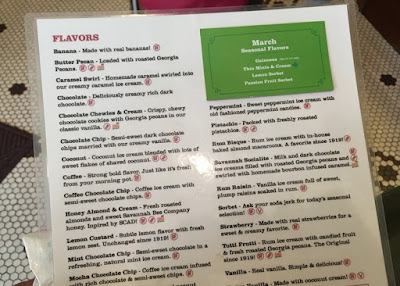 With the Girl Scouts connection to Savannah (the original headquarters lies within downtown Savannah), we weren't surprised to find Girl Scout Cookie related flavors available for purchase; in fact, a couple of scout troops dropped by during our visit for some dips

However, we figured that since we were in the largest pecan producing state in the nation, we needed some scoops featuring the nut. My choice was easy in their Butter Pecan, and with plenty of roasted area pecans, it was probably the best version I've had since the one from Youngstown-based Handel's Ice Cream. But as good as this was, my spouse's Savannah Socialite, with dark and milk chocolate ice creams, mixed with bourbon-infused caramel and those same pecans, was even better. 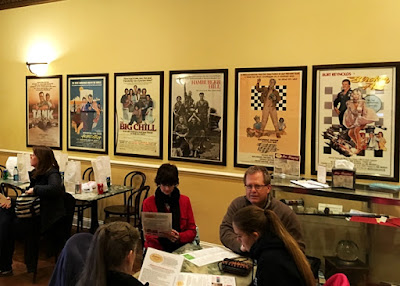 A bonus fun aspect to Leopold's is the bevy of movie posters and memorabilia found inside the shop. This isn't just some random parlance but rather a result of current store owner Stratton Leopold's dalliance in Hollywood's movie industry. His pursuit has turned out to be rather successful, leading to credits a number of movies, including production/producer credits in films like The Adventures of Baron Munchausen, Mission Impossible 3, and The Mosquito Coast.