Ice Cream Chronicles (Year 5): Rising Up to the Challenge of Your Rival

We freely acknowledge as a couple that our appetite for hot, spicy food skews our perceptions a bit.  With that said not even the most veteran, heat-tolerant spice seeker (we don't count ourselves in this select category) can't avoid being sent into facial contortions given enough capsaicin in their consumables.

Add in a little lack of consistent, practical experience of late with the hot and spicy, and perhaps our recent experience with one of Asheville's hottest food purveyors was to be expected.  Thankfully, the outing, with an eatery appropriately starting with the name of Rocky only put us partially down for the count, and a little after dinner ice cream treat soothed our somewhat seared pride. 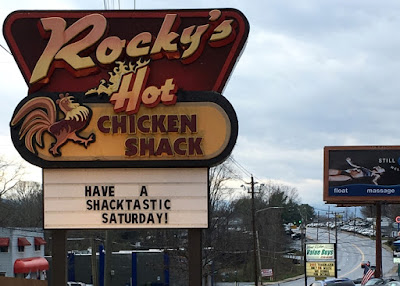 A flame-breathing chicken is certainly an eye-catching logo (especially for spice-seekers like us) and our sighting of it put Rocky's Hot Chicken Shack firmly on the radar. Originally opened up by Rocky Lindsley in 2009, the demand for his chicken by locals has never ceased. After a temporary closure in 2010 when the crush of diners became too much, a little assistance from members of the local food scene got the eatery back up and running again in its current West Asheville location. On the night we dropped by Rocky's, we didn't have anything else particularly in mind for dinner, so why not play with a little fire? 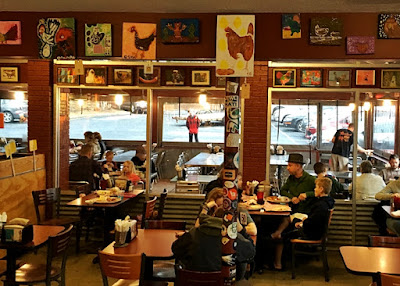 The inside is pretty much in the basic brick-and-mortar, hold-lots-of-people mold, save for the Rocky's-related media and the numerous pieces of chicken-related art. Created by various local artists, these fowl creations are available for purchase as a fairly unique dining souvenir. 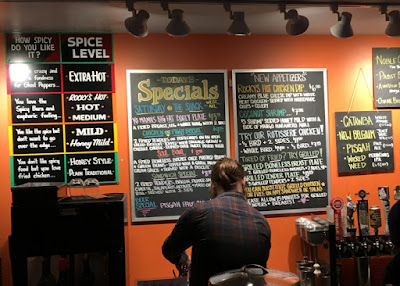 While other chicken-based options are available (rotisserie, pot-pie, and a variety of sandwiches), most people come here for the fried chicken.  I didn't notice it at the time, but Rocky's actually has eight levels of spiciness available, counting the honey-based preparations. What we also didn't know at the time was that Rocky's "Extra Hot" spice level, laden with the heat of ghost peppers, is known by locals as “Mount Saint Hell No!"

When the clerk took our order, she wanted to really ensure that we knew what we were getting into, handing us a toothpick dipped in the sauce used in the preparation. It burned, but it didn't seem THAT bad. Still it was enough to grab a 2 oz. tin of one of their dipping sauces. While Rocky's charges for their dipping sauces, they turned out to be worth every cent (I would advise first-timers seeking the heat that their bottomless option is a good get.)

At the time, we also thought adding in our sides and an appetizer (an appealing batch of Fried Green Tomatoes with sweet pepper jelly and goat cheese) plus beverages (Rocky's has a nice selection of local craft brews, but we opted for non-alcoholic on this visit) would be enough to combat the heat. 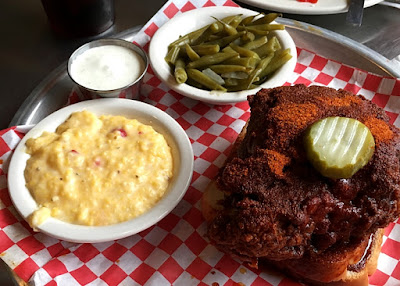 And then came our orders. I think our minds both whispered "Oh, sh*t" as we noticed that our chicken came tinged heavily in Incineration Orange Red , but we blithely dove in and took a couple bites.

I've had the hottest level of Prince's Hot Chicken in Nashville before, but their peak heat was reasonably tolerable throughout. We've both had a slice of Mikey's Late Nite Slice Fiery Death Pizza - laden with three peppers (including Carolina Reapers) and cayenne laced "Hate Sausage", that creation smacked you as foolish right out of the gate, but once we survived that initial blast we both settled into a relatively-comfortable discomfort zone for the rest of our eating.

Eating Rocky's Ghost Pepper Extra Hot chicken was like tussling with an argumentative relative, tussling for a good dozen minutes until they leave the room, only to come rampaging back into the room and shout, "Oh, yeah, another thing!..."

Yes, we did slow down. Yes, we struggled...a lot. In between deep breaths and wiping sweat off our brows, we somehow did notice that their chicken was fried quite well (the meat was nicely juicy) and the sides were pretty good too. Basically, the chicken brought us to our knees, but in the end, we persevered until our respective stomachs told us volume-wise we couldn't eat any more. 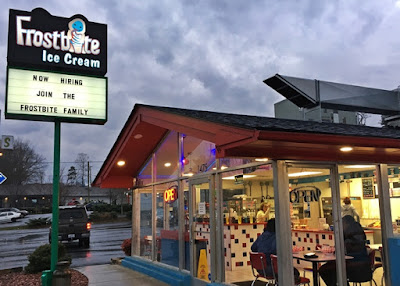 While Rocky's does have frozen confections on their dessert menu, our fullness level precluded us from putting an order in at that time. However, by the time we reached our car, the heat ravaging our insides was at five-alarm-level, and we decided just a small dose of ice cream would be in our best interest.  Luckily for us, Frostbite Ice Cream was but a hot pepper's throw away, and we dove in for a quick dose of soft-serve. 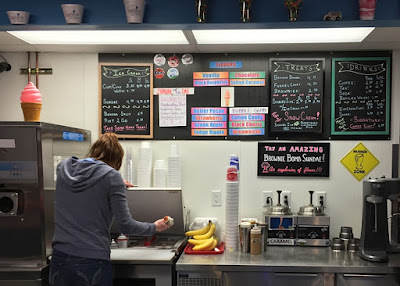 Frostbite seems to fall into the category of small, hometown ice cream joint similar to Columbus' Double Happy that can whip up all the basics and do it with a smile. A few minutes after getting the run down on their offerings, I walked out with a small soft serve salted caramel with two spoons for sharing.  The salted caramel tasted quite delicious, and felt even better as it coated and cooled off our singed esophagi.