One Hot Prince and the Man in Black

Prior to that beckon, my spouse and I had engaged in a combo of toodling on our mobile phones and conversing  over past and future vacation plans. At this point, the latter was diminishing rapidly, but we wanted to make our final hours of freedom in Nashville worthwhile.

My senses, already aroused by the scent of fried foods for the last 40 minutes or so, jumped to attention. The sales ticket indeed matched the number, and I hungrily rambled from our seat to the front counter.

"You ordered the extra hot?" I could feel owner André Prince Jeffries' eyes peering into me.

I nodded, "Yep, one extra hot and an extra extra hot."

"Good. I wanna' keep my eye on you," she replied, "to see if your head explodes." 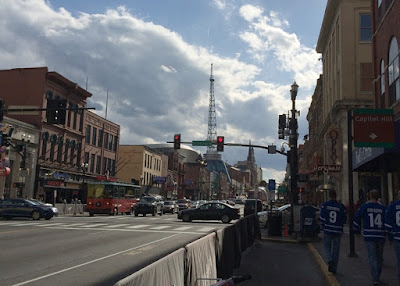 Few would doubt Nashville's place as one of the up-and-coming cities in the country. At times, this status presented itself in surprising ways, including downtown parking rates that rivaled those in San Francisco. Other times, it wasn't so surprising, from a large selection of hip-leaning coffee cafes to failed attempt to attend a music show related to Tin Pan South, the Nashville-based songwriter-oriented festival now in its 24th year of existence. This festival, featuring a variety of songwriters in intimate venues with proceeds going to a selected beneficiary, has grown in popularity by leaps and bounds, so much so that we discovered buying a festival pass doesn't guarantee entrance into these intimate-venue shows. Dozens of pass holders were turned away at our venue even before we cash-payers (pass holders have first dibs on admission to a show) could even sniff the doorway.

We found the downtown area buzzing with activity during our visit, with the Tin Pan South shows, and a near-end-of-season hockey game involving the home-standing Nashville Predators adding to the usual entertainment opportunities.  Other than the failed attempt at the Tin Pan South show, our downtown destination was the one and only Johnny Cash Museum. 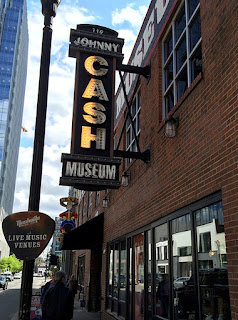 Johnny Cash's impact on the music world in general cannot be overestimated: the list of awards, honors and inductions into various halls of fame and musical styles and genres is a fairly extensive list. After paying for admission in what was a fairly spacious gift shop/coffee cafe area, I was a little surprised by the intimate setting within the museum. It feels smallish, but as one delves into the displays, one finds the museum touches on many more aspects of his estimable effect within this music sphere than one might initially think. 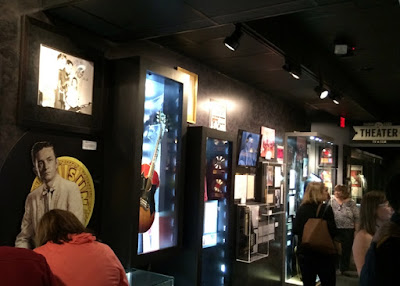 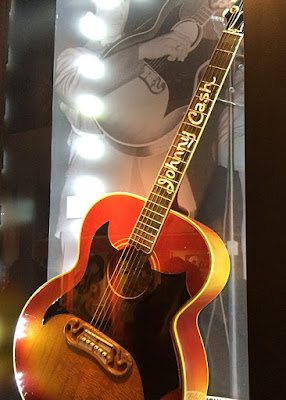 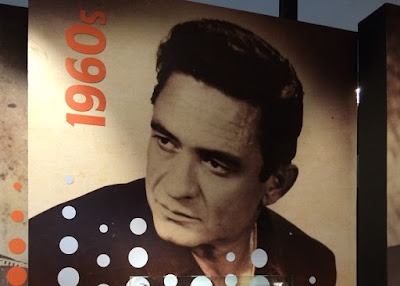 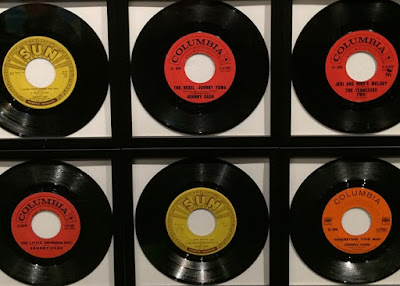 The museum makes good use of modern technology: various iPod styled consoles allow visitors to interact with The Man in Black's music in various way, including listening other artists' covers of Cash's music as well as playing sound engineer with a selection of his songs. 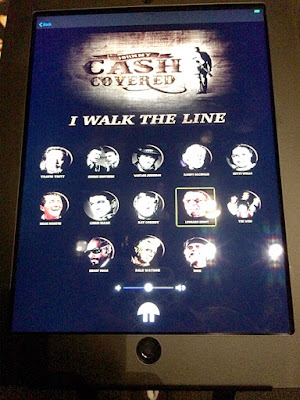 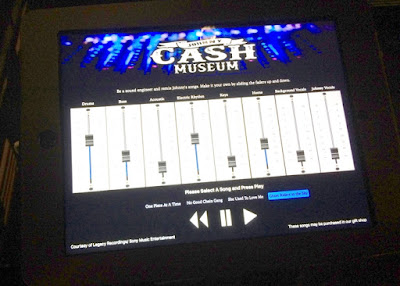 Cash'a own marital and drug-addiction issues, combined with his various religious, patriotic and social endeavors (most famously, prisoners rights) blended together with his unique sound to create a complex musical and personal legacy. While some topics were given light mention compared to others, and there really is only so much information you can take in during a single museum visit of any sort, I did appreciate that they were touched on in the first place. 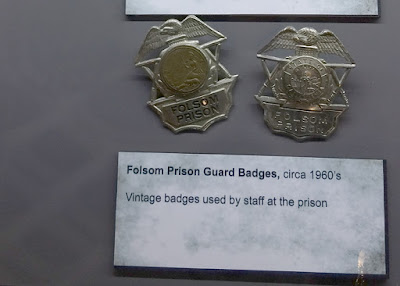 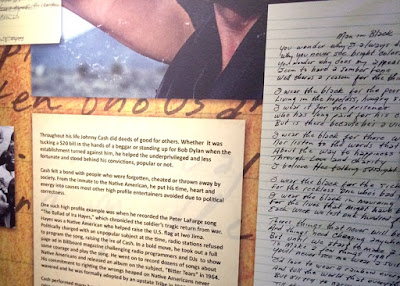 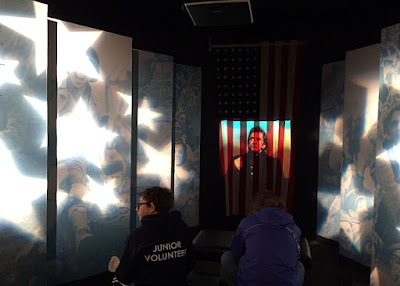 Those of a certain age like my spouse and I know how ubiquitous Cash's presence once was on both television and radio. What we had either forgotten or never realized was that Cash had a presence in other artistic fields, including television and movie actor, movie producer, painter and book author. The displays of his pop culture presence were also fairly revealing (including an exhibit on the Cash biopic "Walk The Line") and at times, humorous, such as the display which showed The Man in Black hawking then-newfangled ATM machines for a Canadian company. 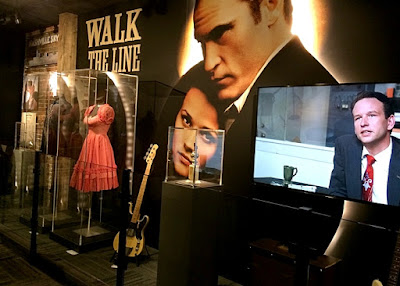 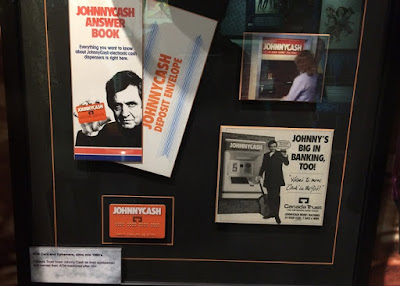 Even if you feel the museum's exhibits tend toward the glossy side, one viewing of Cash's award-winning video "Hurt" will quickly get your mindset back to the complexity that made up The Man in Black's mythos. Produced in 2003, the video showed Cash to be candid as ever, with his physical fraility prominently displayed (both he and his wife June would pass away a mere seven months afterward.) Blend in his quavering vocal of the Nine Inch Nails song (from 1994's The Downward Spiral), a good portion of director Mark Romanek's starkly-shot footage of Cash and his wife June at the House of Cash Museum in Hendersonville, Tennessee, which at the time was in severe disrepair (the museum was completely lost later to a fire in 2007), and brief glimpses of a younger Cash throughout his long and varied career, and you have an imperfectly perfect four-minute encapsulation of the complexity and true celebrity and musical stature this man still holds to this day. 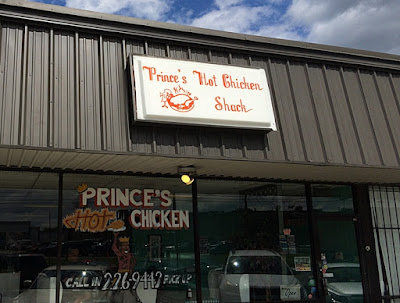 Before meeting the Man in Black, we had a date with a Prince. As detailed in this prior blogpost on Columbus' own Nashville hot chicken outpost Hot Chicken Takeover, the mythos behind this spicy fried chicken creation was the result of a spurned lover's attempt at revenge gone wrong, as the victim (in this case, Prince's Hot Chicken Shack's founder Thornton Prince) turned this into a business.

Perhaps Prince himself couldn't have seen the phenomenon that his dish would eventually become, with even a certain familiar chain chicken place shooting out their own rendition for consumers. As big fans of the spicy bird that Columbus' Hot Chicken Takeover produces, we figured we had to try a sampling the first time we got to Nashville. After some debate of whether convenience of location (there are obviously several area purveyors of hot chicken) should matter, we decided it really didn't in this case. We had to sample the original.

Prince's Hot Chicken Shack currently has its home in a non-descript strip mall on the north side of East Nashville. As one might suspect from its location, this eatery is solidly in the little-to-no-frills category. A few seats are there for those who prefer to dine in, but we noticed immediately that the locals have a distinct advantage in terms of phone in and pick up. Those who are there to dine in, or who have placed their order at the counter for grab and go, will simply have to wait. 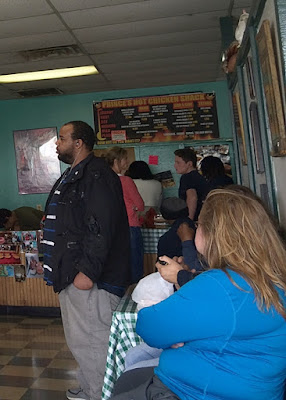 Similarly, the menu is pretty basic, but unlike Columbus' Hot Chicken Takeover's meal option, you assemble your menu a la carte at Prince's: name your preferred chicken piece(s), how hot you want it, and any accompanying sides or beverages. Being the no-frills operation it is, bring your cash with you; Prince's does not accept credit cards. 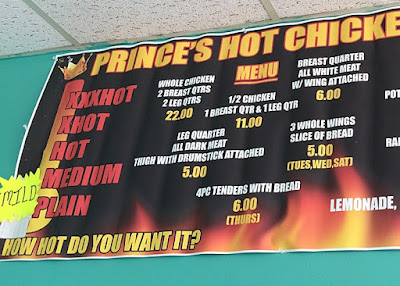 The side dishes we got (cole slaw and baked beans) were pretty basic renditions, but obviously it was the hot chicken we were here for. Based on our inspection, Prince's rendition sports a darker and more reddish-brown exterior than the HCT version we're familiar with. In an interesting turn of events, I was the bold one on this day and went for the XXXHot, while my spouse (typically the bigger spice-seeker of the two of us) went merely for the XHot. 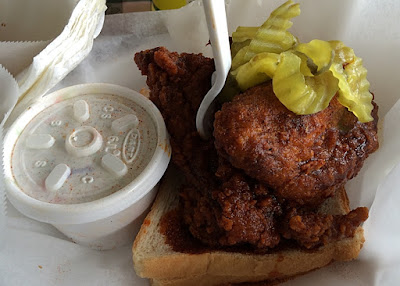 As it turned out, my head did not explode, and these fried birds did not come close to the hottest thing my spouse and I have ever downed (as far as eatery-based menu items, that still falls to Mikey's Late Night Slice's Fiery Death Pizza with hate sausage and a slew of peppers, including Carolina Reaper)
With that said, the XHot was roughly the equal of HCT's Holy! heat level. And my XXXHot level was even hotter, with a nice, continually building burn. This effect was helped immensely by the exterior; biting into the crispy skin was almost like releasing pepper-laced packets to add a fresh burst of capsaicin to the existing mouth burn. And yes, both birds sported nicely tender meat within. 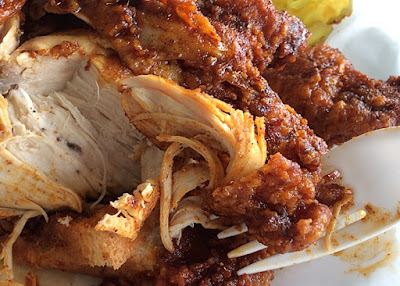 Suitably baptized at the source of this tasty dish, we eagerly look forward to trying other version our next time down to the Music City.