As much ground as the previous couple of weeks of Southern road trip blog posts covered, not every place we visited made it in. However, that by no stretch of the imagination means that they aren't worthy of a mention. These next couple of posts touch on an eatery from each of the major cities we encountered during this road trip that we found to be worth the consideration at the very least.

I know I can't personally start the day without a good cup of coffee, but the following two places add much more to the equation other than that caffeinated elixir. 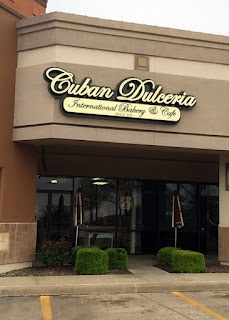 Dallas - Cuban Dulceria International Bakery & Cafe
A longstanding Dallas-area tradition, the Vasquez family has been serving their Cuban specialties to Dallas-area residents since 1979. They may have remained pretty much only on the radar of the locals, but a couple of unrelated pushes from as different spheres of fame as you can imagine (President Barack Obama efforts to normalizing Cuban relations and a Khloe Kardashian reference to cortaditos) has bumped into modest eatery much higher onto the culinary radar. In fact, the demand created has encouraged the owners to open up a second location in the area. 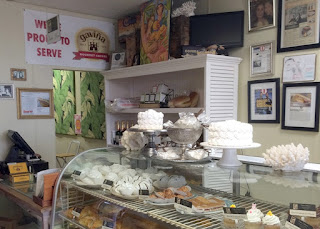 The Cubano sandwich is apparently the item to try (being named one of the area's 100 Favorite Dishes in a 2012 Dallas Observer article) but on my early morning visit, I had a couple of their Cuban pastries on my mind. Both the Jamon Y Queso (Ham & Cheese) and Pastele de Guayaba (Guava Pastry) were equally flaky, well-made and just plain delicious. And these are but two of the many perfectly grab-and-go treats Cuban Dulceria has available. 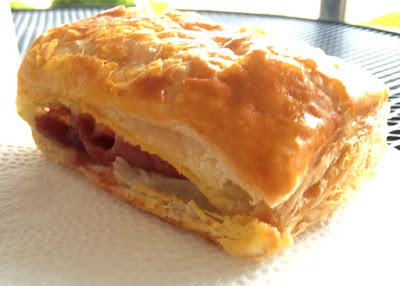 And, oh yes, Kardashian kerfluffle aside (I had not heard of the incident myself until after my visit), I opted not for the Cortadito but rather the Cafe Con Leche. This medium-sweet yet strong blend of espresso, milk and sugar went nicely with the guava pastry, but provided a perfect pairing with the savory ham & cheese. 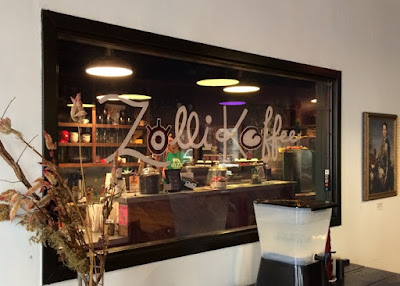 Nashville - Zolli Koffee
For those familiar with Columbus' own coffee/brewery combination (Zauber Brewing and Das Kaffeehaus in Grandview Heights), Zolli Koffee offers the caffeinated-half of a similar yet more down-home combination in The Gulch neighborhood of the Music City. 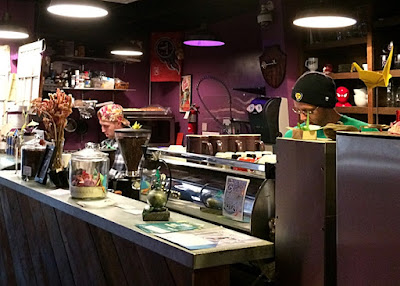 Open for just over two years, Zolli Koffee is the brainchild of Zollie Wilson. We were quite pleased to find that the vibe here was of the friendly and welcoming type, and the quirky decor only added to the make-yourself-at-home kind of feel. 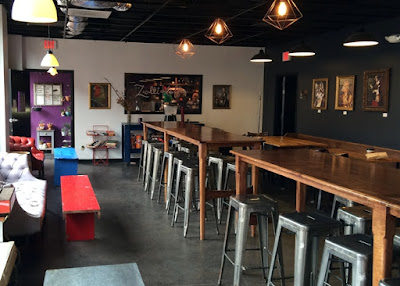 The main gathering space has a charming ramshackle kind of feel, with long tables and bar stools mixed with couches and wooden coffee tables/foot rests (take your pick) and an assortment of themed light fixtures above. While Zollie Koffee generally rules the roost during the day, the craft beer crowd starts to take over in the afternoon, when Jackalope Brewery opens its doors for business. 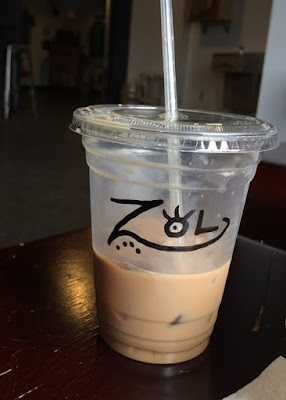 The coffee? Columbus' Cup O Joe offers up a seasonal Lavender Iced Latte that I really enjoy, and Zolli Koffee's version (they advertise it as a mocha) is right up there; the espresso remains dominant, backed up with the milk and the unique flavor profile that lavender brings. And my spouse really loved her Chai Latte - Zolli Koffee handcrafts their own mix with a nice blend of spices and just a hint of sweetness. Coupled with home-baked pastries (all created by the Wilson's own mom), and it was almost like we were easing back on our own couch in our living room, unhurried but anticipatory to the day's upcoming events.