Yes, there's more! We hit a plethora of noteworthy eateries on our road trip that didn't get previously covered in my previous Southern Travels posts - the second and final part of this mini-series continues below: 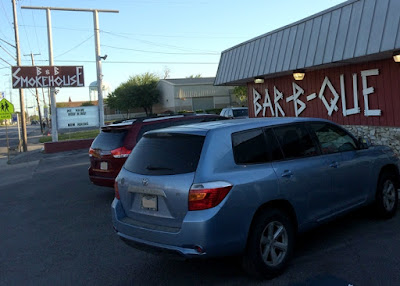 The third item food item that my spouse agreed we had to have while we were in Texas (outside of kolaches and crawfish) was BBQ beef brisket. San Antonio's B&B Smokehouse, located in the Harlandale section of town, proved it had the chops to serve this area staple. 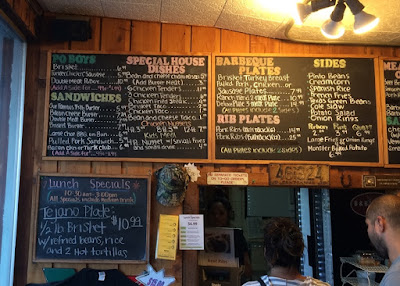 An old-timer in San Antonio's BBQ scene (starting in 1958 as Hal's Drive-in and Bar-B-Que), B&B offers a few twists beyond the traditional BBQ menu in its mains (po-boy sandwiches, burgers and chicken tenders area available) as well as their sides (onion rings and creamed corn). Even the condiments were also diverse: bottles of traditional sriracha and sambal oelek stood right next to their hot sauce and balsamic vinegar counterparts.

The place doesn't quite fall into hole-in-the-wall category, but does a good job of making you feel like you're in some wooden barn out in the Texas countryside. The wood-paneled walls are packed with tons of photos and other media, including vintage photos (some autographed) of area personalities and performers. 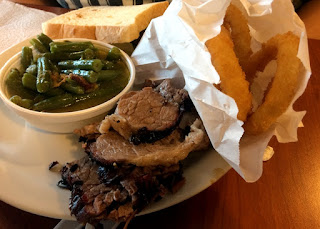 Of course, the brisket was what we both came for and B&B served up a very good rendition of it. with a nice smokey crust and a tender, pull-apart quality. Coupled with serviceable side items (the onion rings were especially tasty), this meal proved to be perfect fuel before our departure from the Alamo City to parts eastward. 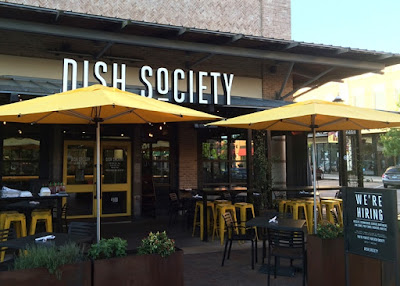 In many ways, farm-to-table is losing a lot of its meaning and status as a distinguishing culinary label. Whether it is more of a gimmick versus a true heartfelt philosophical expression by a particular eatery, the main factor will always lie in the quality and taste of the dishes it serves.

Columbus has its share of these type of places (Northstar Cafe and Acre Farm-to-Table come to mind), so it's not surprising that the breakfast place our friend in the Houston area suggested fell squarely into this category in the form of Katy's Dish Society.

On this rather slow morning at the eatery's second and newest location, we found that Dish Society's menu (with local sources proudly trumpeted) had a few more options than its Columbus counterpart restaurants, Overall, however, their offerings more or less remain in the same ballpark with a variety of wraps, sandwiches, salads and the like. A nice added bonus for Dish Society diners lies in their selection of area craft beers on tap. 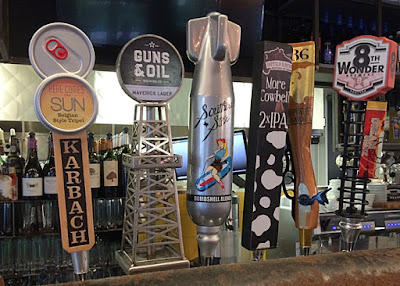 With this being the breakfast hour, we decided coffee was the better option (the eatery uses local fair-trade roaster Greenway Coffee), which went well with our generally well-crafted menu items. The winner for both my spouse and my friend actually resided in a side item in their Smoked Gouda Grits. Other dishes were firmly in the competent range in a Breakfast Taco side order for my spouse and Breakfast Sandwich for our friend (the petitely-cubed skillet potatoes that came with added a nice bit of novelty to the dish. As for me, my Nutella French Toast fell into one of the better french toast dishes that I've had in awhile. 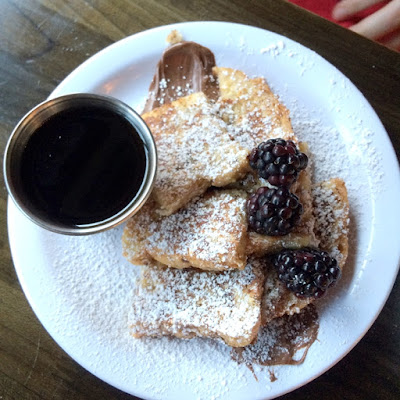 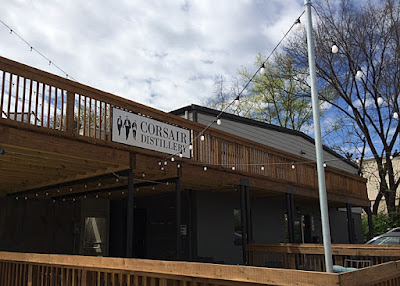 A good deal of time has passed since between visits to this craft microdistiller for us.  Back in October of 2012, we stumbled upon what was still a fairly small operation in Bowling Green, Kentucky. With distillery workers working on labeling bottles in the area behind what passed as the tasting area, and with their Frankensteined still just to the right of us, we got to taste an array of highly untraditional (including a Rogue Red Absinthe and Quinoa(?!) Whiskey) and uniquely tasty spirits.

This "just get it done" type attitude, emblazoned firmly on Reservoir Dogs-styled label, has served Corsair well since their founding in 2008, earning them numerous awards and accolades. This has also led to tremendous growth for the company, which now has several facilities throughout Tennessee and Kentucky. On our trip into Nashville, we stopped by their tasting room in the Wedgewood/Houston neighborhood for a revisit. 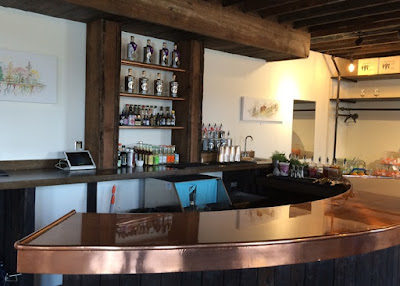 Their newly-built space here (not even half-a-year-old at the time of our visit) wouldn't be out of place at a brewpub - there's plenty of deck space outside to accommodate the masses.  The interior is pretty natty as well, with one area geared toward tasting and another geared to cocktail making. 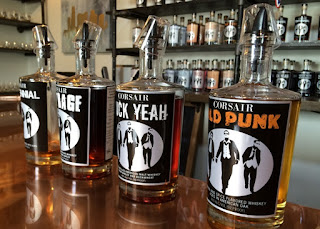 Again, Corsair's selection of spirits available for tasting were equally as unique as our first visit to their Bowling Green location. Their Genever Gin from malted barley was a finalist for a take home bottle, and their Wildfire Malt Whiskey was one that immediately put some hair on my chest (a very hard thing to do.)  But in the end, it was their Oat Rage, a smooth whiskey made from oats and coffee malts, that made it back in the car with us.

Oh yeah, did you know they have a brewstillery location in Nashville as well? We know it's an early candidate for our things-to-do the next time we're in the Music City itinerary for certain.