"Deep in the South of Texas
Not so long ago,
There on a crowded island
In the Gulf of Mexico

It didn't take too much money,
Man, but it sure was nice.
You could dance all night if you felt all right,
Drinking whiskey and throwing dice."
"Balinese" - ZZ Top

As Columbus-area natives often head south to the Hocking Hills to get away from city life, Houston folks make a similar trek down to the beaches of Galveston Island along the Gulf of Mexico. On a particularly clear and promisingly warm day, we made the similar trek along back roads along Texas Highway 6 to this sandy paradise. 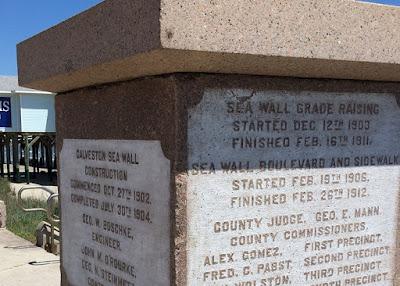 Whether you are weather-attuned or not (we admit to being a couple of weather geeks ourselves), you cannot visit Galveston without the specter of deadly hurricanes in the back of your mind. In 1900, Galveston, then the fourth largest city and the economic powerhouse of the state of Texas, was hit with what is still the deadliest hurricane in U.S. history blew ashore and killed over 6,000 people. Most recently, 2008's Hurricane Ike dealt released its wrath over the area, an mental and economic body blow that the area has only now recovered from. But as noted by this Texas Monthly article on the city, the struggle to best protect "the (most) quintessentially Texan" of cities from here on out is still being debated to this day. 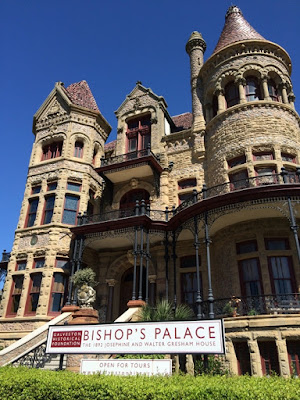 A great way to experience this past glory and current struggle is to visit one of Galveston's historic homes. The Victorian-styled, multi-story Bishop's Palace gives you the extravagance of the glory days and the importance Galveston held, both in its original (the socially and politically prominent Gresham Family) and follow-up (Bishop Christopher Byrne, the head of then locally-based Roman Catholic Diocese) residents. Those who pay the modest admission fee are allowed to roam at their leisure through the multiple spaces and peruse the mostly-true-to-era displays within. 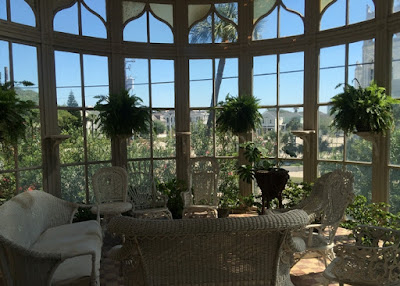 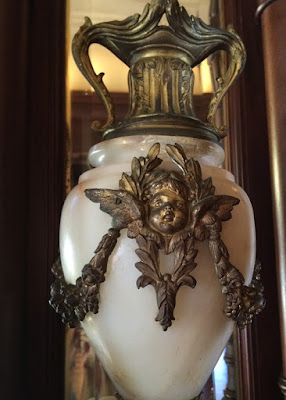 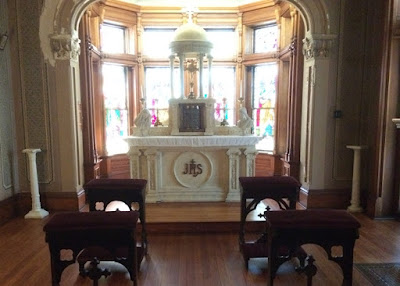 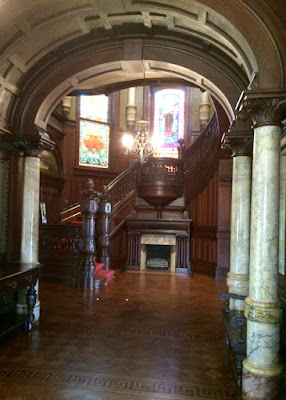 After the diocesan offices moved to Houston in 1963, the house was opened up to public tours by the Catholic Church and later by the Galveston Historical Society, the current owners of the home. While the home survived both the 1900 Hurricane and Hurricane Ike with limited damage, you can see a hint of the chaos these storms can bring via a subtle sign located roughly three feet off the floor on a wall in the gift shop. 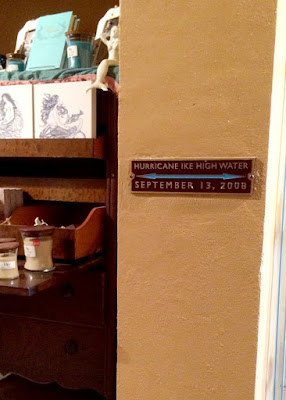 Like other high-tourist-traffic areas, the off-season makes for a more leisurely experience, but the lack of electricity and energy that throngs of people bring during the peak periods that make these areas truly sing is noticeable. The Historic Strand was not quite dead but definitely sported a sluggish feel as we hiked through the area. Thankfully, we did get a nice little jolt of whimsy as we wandered into the saloon-styled space of long-time area confectioner La King's. Sweet treats are always a temptation, and its almost impossible to resist if you catch them, as we did this day, during one of their live taffy-pulling demonstrations. 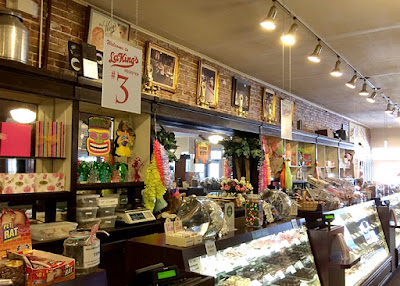 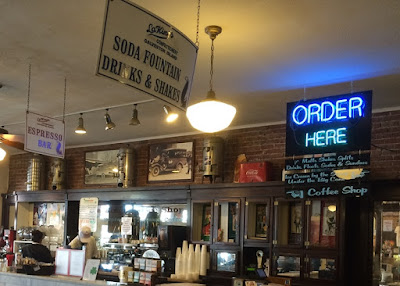 From there, we wandered down to the shore area near Murdoch's Gift Shop and the amusement-park-themed Pleasure Pier (both rebuilt after Hurricane Ike's impact, unlike the initially-referenced Balinese Nightclub, which unfortunately never made it back). The atmosphere was similarly sun-drenched and easy-going, allowing for a perfect speed for sauntering along the shoreline (and avoiding stranded jellyfish) or tanning on sun-baked beach sands. 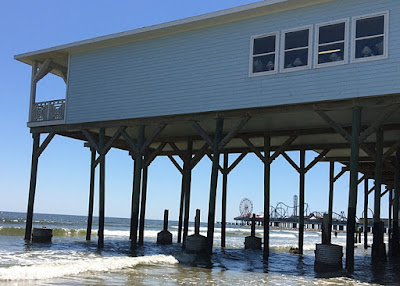 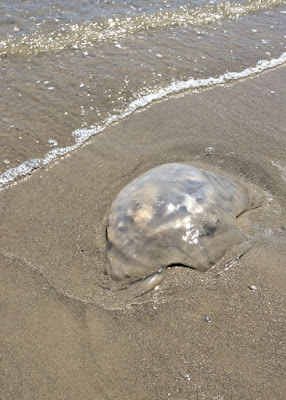 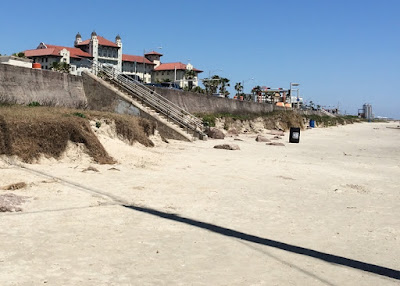 That evening, we found ourselves back in Houston for what would count as our fancy dinner of this excursion. It was also first chance at something we knew was a bit hard to find but heard was worth the sampling if we had the opportunity. 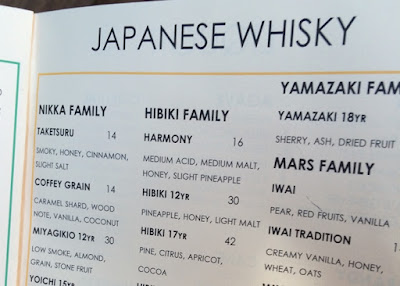 The opportunity to sample whisky made in Japan here in the United States is really a case of limited supply and ever-increasing demand: in short, they're hard to find, and spendy to sample. We found our opportunity to take our first tastes of these elusive beverages at Midtown's Izakaya, self-proclaimed as "Houston's first Japanese gastropub" on their website.

Izakaya's food menu is mainly small dish/tapas based, melding local influences with staple international menu items to create a wide-range of munching options for diners.  Out of the items we sampled, our favorite by far was the Texas Quail Scotch Egg - this combo of juicy ginger-garlic flavored quail meat surrounding nicely-runny eggs, crisply coated with panko in a sesame vinaigrette was a great melding of tastes and textures. 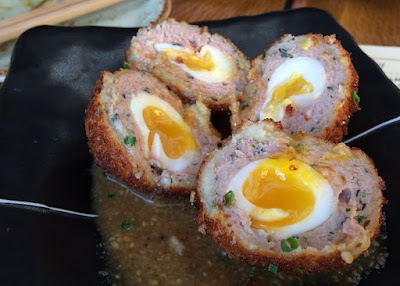 Two other dishes rated as more subtle in taste but otherwise competent fare in the King Trumpet Mushroom Skewers (pictured below) grilled with garlic soy butter and togarashi, and the Yakitori , which came coated in a sauce that seemed to split the flavor difference between straight soy and teriyaki sauces. 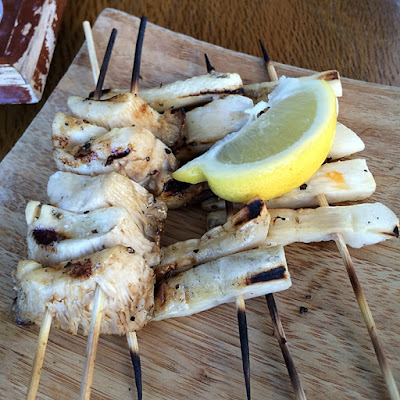 The only miss for us on the small plates was the Lazy Osso Bucco Fries - while quite generously portioned, the somewhat watery Osso Bucco sauce needed some kind of herb or spice kick to perk up the flavor and also made the otherwise crispy fries soggy fairly quickly. A larger group of diners would mitigate the latter factor. 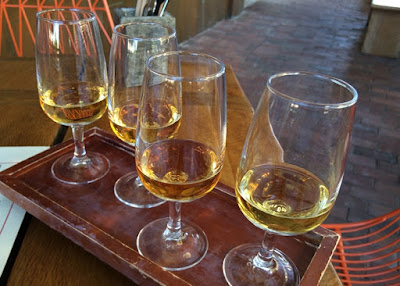 But this visit was spurred as much if not more by Izakaya's Japanese Whisky selections, and those with more modest pocketbooks may do a double take at the more exquisite options available (a shot of the Hibiki 21-year whisky will set you back nearly $70.)  As newcomers to Japanese whiskey, we figured the introductory "Letter From Tokyo" ($35 per flight)  was the best way to go, featuring selections from Nikka, Mars Shinshu and Suntory Hibiki.

The Nikka Coffey Grain featured a big butterscotch note and nice mouth burn, while its cousin the Nikka Pure Malt sported a mead-like scent and a fruity beginning, progressing to a malty, almost earthy finish. The Mars Iwai Tradition was interesting in its subdued, almost non-whiskey character - I thought it had the most mouthfeel of the four, but we got little in the way of scent (perhaps grape?) and nary a hint of burn. The final flight member, the Hibiki Harmony, was easily the most enjoyable, as it seemed to combine the best aspects of the previous three.

With the next opportunity to sample such whisky possibly far in the future, we split a shot of the White Oak Akashi to finish our dinner and were left with a hint of what some of the more exquisite Japanese whisky varietials might feature in its more complex nature (hints of cherry and pear with a honey backbone and a nice spicy burn at the end.) 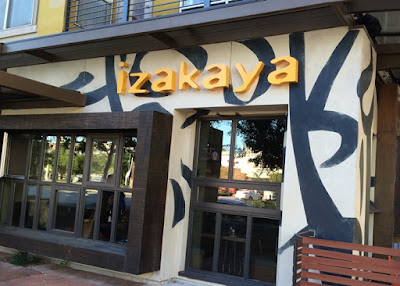