Onward to the Music City

School pride and T-shirts are perfect partners in that there's just about no easier and more visible way to express that love of your alma mater to the world than a cotton shirt with your school's name and colors. However, that visibility, especially when it's attached to a big name college program that emphasizes a certain English-based article (as in part of speech) in their name, is almost certain to  draw attention.

"Hey, it's someone from THE Ohio State University?" The emphasis on the word "the" was over-emphasized to the nth degree, and the loud, lively and largely Cajun-accented give-and-take behind the counter between the kitchen and front area staff picked up noticeably.

While we were a bit flush from the attention, the smiles of the folks around showed us it all in good fun. We shouldn't have expected any less; after all, we were standing smack dab in the middle of Ragin' Cajun country...

One thing we figured out early in our relation was our love (or at least tolerance) for long drives. It only seemed appropriate that we faced a Texas-sized drive (roughly 13 hours) as we left the Lone Star State from the outskirts of Houston to Nashville, Tennessee, our next vacation destination. Of course, a long drive demands the right kind of fuel, and we knew exactly what would fit the bill. 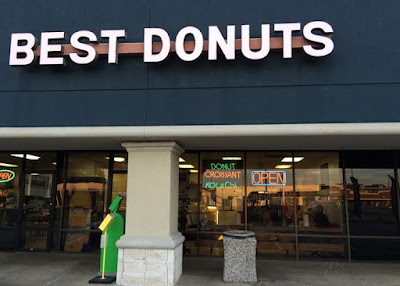 As big fans of Columbus' Kolache Republic, we couldn't not leave the original domestic home of this Czech staple without picking up a couple of these treats. Picking out the best kolache shop in the Houston area is something of a crapshoot as there are so many, but Katy's Best Donuts turned out to have the right mix: small, family-owned business, simple menu choices and a friendly relaxed atmosphere. Their savory kolaches (the use of boudin sausage was a great local touch) were perfect as for the grab and go meal we were seeking. 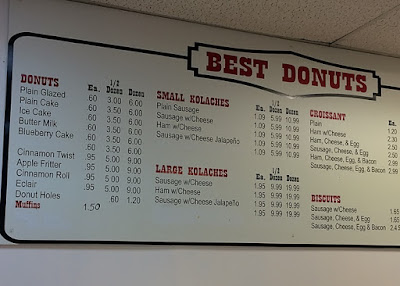 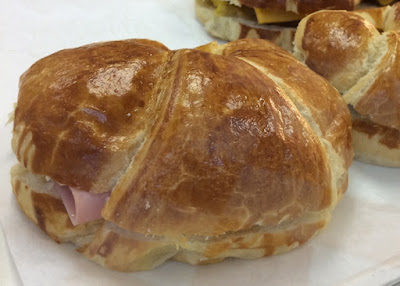 On this day, we would be mainly confined to our vehicle, but the drive itself contained some entertaining moments. The drive took me for the first time since I was a young kid over the bayou on the Atchafalaya Basin Bridge, which at over 96,000 feet rates as one of the world's longest bridges.

As we veered into Mississippi, the commemorative set to the recently departed Merle Haggard by B95 Country in Mississippi on the day of his passing was the proverbial music to our ears. As their signal faded, the folks at WUSM, based out of the University of Southern Mississippi, kept the musical entertainment going, including the cheeky fun of the Pinebelt Pickers' Large Marge the Party Barge. 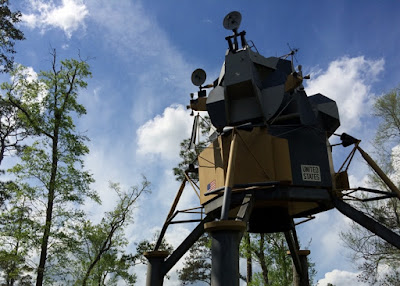 In a case of happy circumstance, construction work at the intersection of Interstates 10 and 59 caused us to miss our turn north toward Birmingham. The Pearl River Wildlife Area kept us on I-10 for a few miles, but the eventual turn around spot turned out to be a hidden gem of a rest area. With the John C. Stennis Space Center just to the north and the INFINITY Science Center literally next door, this rest area had a display featuring an actual NASA Apollo-era Lunar Lander mounted about 20 feet above the ground.  Even more fun, the cement pad underneath the lander held the footprints (with moon boots, of course) and the signature of Biloxi-native Fred Haise, one of the three astronauts who survived the harrowing Apollo 13 attempted mission to the moon and later served as test pilot for the Space Shuttle program. 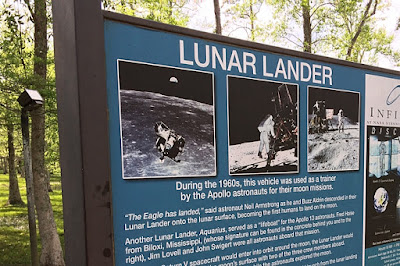 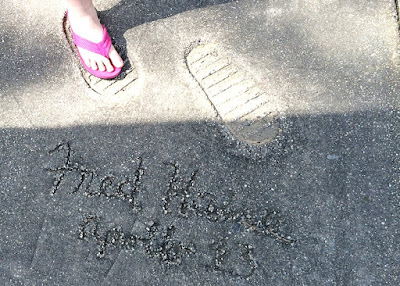 Our big meal of the day came at lunchtime when we were still firmly within Louisiana. Other than crawfish, my spouse and I agreed that Poor Boy sandwiches would be a must-do on this trip on our way through the state. At the suggestion of our Houston-based friend we had visited (who had spent several years living in Louisiana,) she pointed us to the outskirts of the campus of University of Louisiana at Lafayette, where the Olde Tyme Grocery plies its trade. 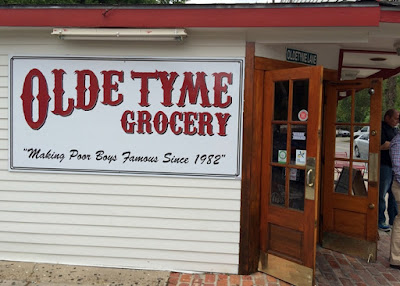 Acquired in 1982 by Glenn Murphee (who grew up in the city of New Orleans,) the Olde Tyme Grocery has transformed over the years from a grocery store that happened to serve Poor Boy sandwiches to a Poor Boy sandwich factory. The shelves are still there, but now they hold with all the things you would want accompanying such sandwiches, including numerous flavors of Zapp's Chips, as well as pop and beer beverages, including several brews from Louisiana's favorite craft beer brewer Abita. As noted above, the atmosphere is loud and lively, mainly through the banter of the employees who feverishly toil to crank out customers' orders. 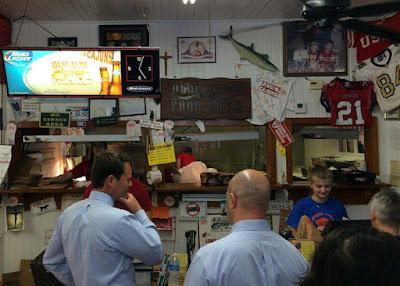 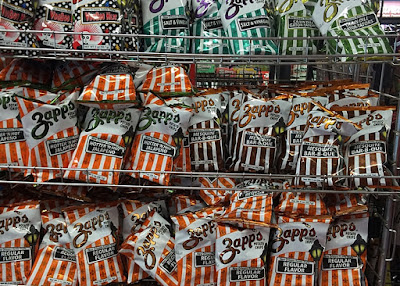 The menu is pretty easy to navigate: you can choose between two sizes of Poor Boy (whole and half) with eight meat and three seafood options (Catfish is only available on Fridays.) Two specialty combo versions are also available. Side items (labeled as Lagniappe) include fries, a couple of sliced bread sandwiches and a Friday-only seafood plate. The eatery also offers specials during evening hours and the Lenten season. If you weren't completely sure beforehand, Olde Tyme's two "salad" options (Sliced Meat and Fried Shrimp) are sure-fire hints that this is not a vegan/vegetarian-friendly eatery. 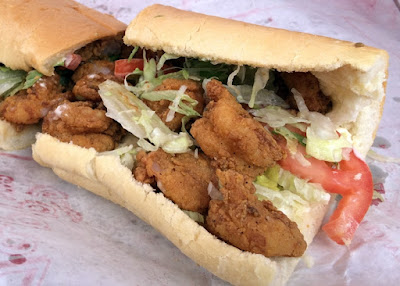 We both went for whole-sized sandwiches and, due to our relatively late arrival, we managed to find an outdoor seat. Believe you me, you will not feel like a poor boy if you down these behemoths in one setting. My spouse's shrimp and my andouille-style sausage Poor Boys were as packed, decadent and delicious as promised; the assortment of spicy sauces at each table ensured a little bit of a fiery kick would accompany each tummy-filling bite. To be truthful, a whole-sized sandwich would've easily fed us both quite handily, but when you're not quite sure when your next journey through Acadiana will be, you might as well go big before you go home.