Charleston Choosing (Part 2): Grits Are Good For You, and The Slice you Needa'

The fact that Charleston's culinary scene has risen on a national level cannot be denied, though if you take as de facto what this USA Today article states, this attention might be a bit much for the locals, as it has perhaps unsurprisingly brought in increased car traffic, raised rental rates, and created staffing shortages in the hospitality industry.

Even with these issues, I am certain the attention given to the local food scene by these national luminaries is deep down a point of pride for the residents of this city of just under 135,000 people, and we were obviously not about to deny ourselves our first sampling of this diverse food scene.
Interestingly enough, a couple of restaurants we visited reminded us greatly of similar eateries back home in Columbus, and fans of these particular eateries back in Ohio are almost certainly going to be pleased with these Charleston counterparts. 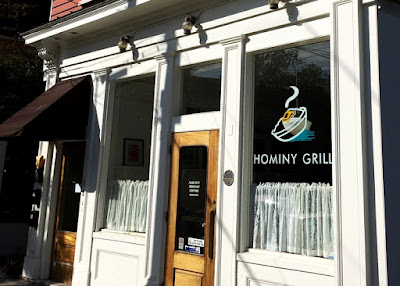 Chef/Owner Robert Stehling's Hominy Grill has been drawing hordes of both locals and city visitors alike on a consistent basis since it opened, and it hasn't been due to "high-faluting" fare either. Stehling, who took home a James Beard Award for Southeast Best Chef in 2008 (the first Charleston-based chef to do so), has done it serving up Southern/Low Country classics during his 21 years of running his restaurant
. 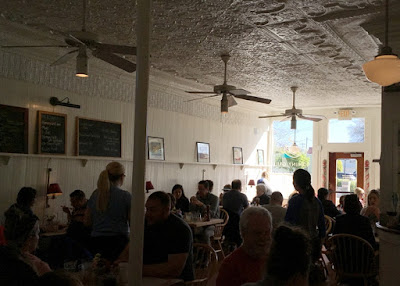 The general feel of the place reminded my spouse and I greatly of the Columbus' Skillet: Urban Rustic Food in the Schumacher Place neighborhood, both in interior feel (very much of the neighborhood, though Hominy Grill has more space to accommodate diners), hours of operation, and menu (both focus on seasonal ingredients, and while Skillet's menu is not strictly Southern, you will often find Southern specialties on their menu of the day.) 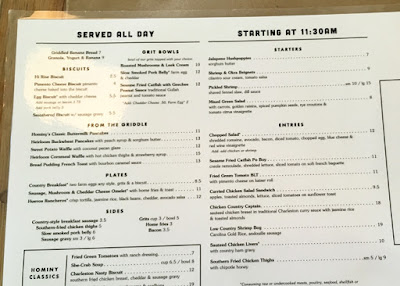 Much of Hominy Grill's food is made with ingredients made in-house, and perhaps there is no better example of this than their so-called "Charleston Nasty Biscuit. This creation takes a crackly-coated chicken breast and combines it with housemade versions of their sausage gravy (rendered from their own housemade sausage) and biscuits to great effect, earning it national raves from The Travel Channel and Food & Wine magazine. It acts as a dynamic duo with their classic Shrimp and Grits dish (indeed, we saw plenty of orders of both shuffle by our table), but we decided to venture to other parts of the menu and ended up quite happy.

My spouse's Grit Bowl featuring Sesame Fried Catfish with a traditional-style Geechee Peanut Sauce was sublime: all the flavors were on display without one being dominant, and the lightly crackly catfish coating played nicely with the flaky fillet interior and the soft, tender grit base accentuated by the peanut sauce. 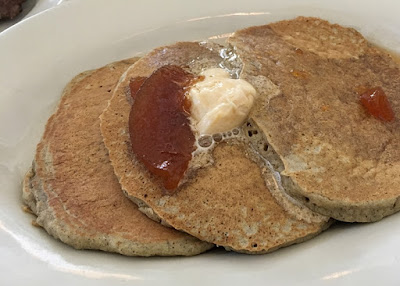 On my side of the table, my Heirloom Buckwheat Pancakes served with peach syrup and sorghum butter may have been the best pancakes I've had since the Lemon Ricotta Pancakes at Minneapolis' Hell's Kitchen. Paired up with that same delicious housemade sausage mentioned above (a delightfully crumbly creation with a wonderful thyme and sage notes) and we were both ready to tackle a day of walking through the city.

Pizza slice joints are generally pretty standard affairs, so when one of these exceeds the norm, you take note.  Such is the case with Uneeda Sicilian, which opened early in 2018. 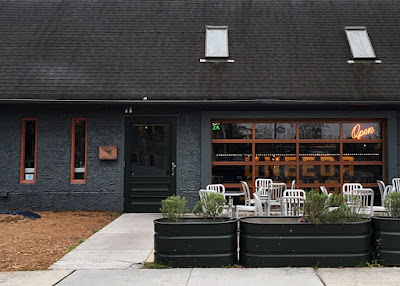 Taking over the Once Upon a Treat Bakery, Ben Rabin's Uneeda Sicilian serves up Sicilian-style pies (not unlike Columbus' Adriatico's Pizza) but done Grandma-style. This style, which most likely originated on Long Island, basically cuts the proofing time for the dough, making for a denser and thinner crust. 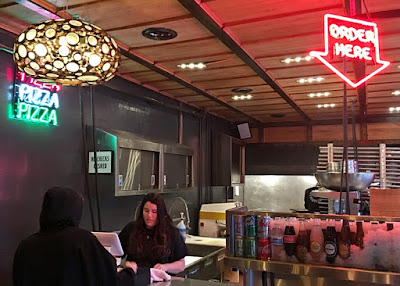 Befitting a slice joint, Uneeda has a very simple menu (four different combinations of pizza available by slice or entire tray, plus a broccoli-rabe based sandwich, Caesar Salad and a Dixie Pudding) and a selection of pop beverages, all rounded to the zeroes (no fumbling around needed for that penny to avoid a ton of change) to help speed service up.  Uneeda mixes in decent seating capacity both inside and out, a small area loaded with branded souvenirs, and neon signs and artsy lights to bring a touch of flair to the interior. 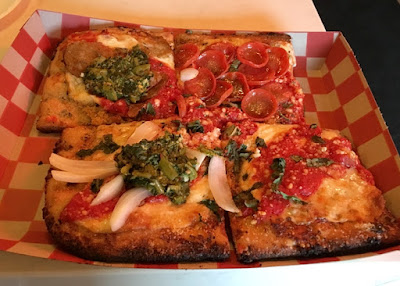 For a nice round price of $20 on the dot (plus pop beverages), this may have been our best combination bargain/really great food experience on our trip. That denser and thinner crust made for a great base for a bright tomato sauce (you could tell on first bite this was no canned sauce job here) and the broccoli rabe, both of which actually out-shined the other excellent sausage and pepperoni which accompanied these slices.

As we ate, we did some pondering back to home at our beloved Adriatico's, whose future is somewhat in flux due to its impending relocation. While the pizza styles are not quite the same, we both thought adding a slice option a la Uneeda Sicilian would be a great enhancer for Adriatico's, but we struggled to find a location in the metro where that would work from a financial standpoint. Thankfully, we have a few months left to enjoy Adriatico's before that relocation, and we're thankful to Uneeda Sicilian for their tasty twist on a familiar favorite..