Takeout Pie of the Month: Adriatico's 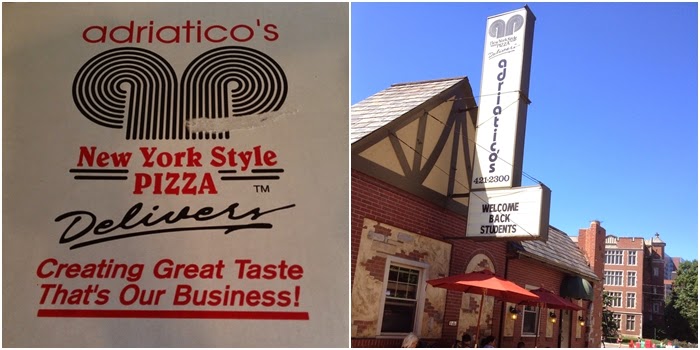 Pizza is one of those things that is hard to do badly. Sure, there are plenty of mediocre pizzas, but even those versions matched with solid liquid refreshment under the right circumstances (a birthday party, a hard day of moving, etc.) can sate hungry souls quite satisfactorily.

There's also something about pizzas that are quite appealing: leftovers, and more specifically cold pizza. I had personally been of the reheat-the-pizza camp all my life until my spouse had mentioned to me that cold pizza for breakfast was something she quite enjoyed. Despite her testimony, I remained a skeptic until we stopped by a pizza place in Klamath Falls, Oregon during one of our first big road trips together for dinner. The pizza fresh out of the oven here definitely fell into the mediocre category. However, a stint in the hotel fridge had transformed the remaining slices into a fairly satisfying breakfast the next morning. Since then, I've enjoyed many a leftover slice cold from the fridge.

One of the things we still have not done enough of since I've moved here is explore the pizzas of the Columbus metro. I've proposed to my spouse a pizza of the month idea to help correct this deficiency, and she seems to have gone along with the idea. It seems like with enough time, we ought to get through all of them eventually, right?

First off: a pizza that has been a favorite of my spouse's since she was a student at Ohio State University - Adriatico's.

Location: Adriatico's resides in the South Campus area of Columbus), providing its pies and other wares to students and other pizza lovers alike since 1986 (the original location of Adriatico's can be found next to the University of Cincinnati campus.)  My spouse has had the pleasure of numerous lunches consisting of their wares; however, I was only introduced to their pizza fairly recently.

Dining Experience: Most people get Adriatico's pizzas to go or for delivery, which isn't surprising as they are catering to the student and faculty population of nearby OSU. Unlike many other takeout places, you actually can dine in here at Adriatico's, but don't expect a lot of room, as the (unfortunately) blurry pic below shows. During the warmer months, a few umbrella-decked patio tables are available on the sidewalk in front of the building to provide more seating.

If you are not jonesing for pizza on your visit, Adriatico's also offers a line of subs, salads and calzones to prospective diners.

From the Takeout Box:  For me, Sicilian style pizzas were never quite anything I stumbled upon while I lived in the Bay Area, but it was available in a few select locations. Two such purveyors reside in the North Beach neighborhood: the long-standing Golden Boy Pizza as well as nationally renowned Tony's Pizza Napoletana, which has recently added this style to their menu. Due to this lack of experience with the style, and my spouse's familiarity with it, this what we've stuck with for takeout.

The first thing I noticed about the pizza was, not surprisingly, its thick crust and its nicely golden-brown color. A glorious ring of browned (but not burnt) ringed the main topping area and had cascaded on top or just over the crust. This appetizing look was confirmed by my first bit of this crust, with a uniquely buttery taste and its nice combination of crunch and chew.

Another bonus is the slightly spicy sauce: both my spouse and I are not fans of the sweeter sauces, and Adriatico's fits the bill here.

My spouse jokes that Adriatico's pizza is a diet-killer, and she really wasn't kidding. Adriatico's tends to produce a greasier pizza than most, and this in combination with the thicker crust and non-skimpy amounts of toppings leads to a satisfyingly full belly after only a few pieces.

Cold Pizza Worthiness: due to the greasy nature of the pizza, the bottom crust had obtained a bit of a soggy texture; however, the outer crust was still quite good. I'd probably lean toward reheating leftover slices in the future if possible, but I could easily eat this cold if I were feeling like a lazy-butt or similar in the morning.

Verdict: Adriatico's is a good solid eating pizza, perfect for filling bellies. If this place had been around when I was a college student, I might be 20 pounds heavier than I am now. While I might venture to their thin-crust pizzas and other menu items just simply out of curiosity, my spouse has sold me on their buttery thick-crust Sicilian style as our de facto pie of choice.