Short and Sweet: Red Velvet Cafe and The Early Bird

Here's a couplet of quick summaries detailing one soon-to-be-opened eatery and a food truck returning to the fold: 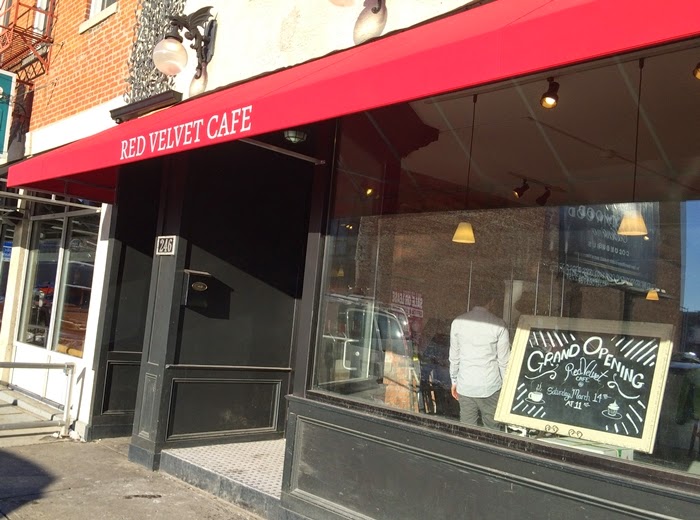 Red Velvet Cafe: At last year's Asian Festival, I learned about a food eatery of some sort in Pickerington which was the first one in the area opened up by Filipino-American owners. Pickerington in not a place I ever had much chance to frequent, so that bit of information went unexplored until now, as their second location is set to open up in Downtown Columbus.

Red Velvet has earned a reputation for its tasty cupcakes, with familiar gourmet flavors like salted caramel, black forest and maple bacon. However, on this visit I was hoping for, and yes, they came through with an ube (purple yam) cupcake. This distinctly Filipino creation was enjoyed very much by my spouse and I later that day.

Their panini sandwiches are quite intriguing to me, hearkening back to my younger days with their protein options like chicken adobo (chicken stewed in vinegar and soy sauce), lechon paksiw (roasted pig stewed in vinegar) and bistek (typically sliced beef cooked in soy sauce and lemon juice with carmelized onions.) While I did not have one on this quick visit in, this will be on the definite to-try list on future visits.

The brick-walled interior is nicely attired with artwork and other decor that should prove to be an inviting place to kick back and hang out inside with one of their multitude of coffee drink options. Indeed, the cafe has the capacity with all the right equipment and a solid coffee source (locally-based Impero Coffee) to brew some solid drinks.  With the "hot" weather (compared to February's weather, 60 degrees is a virtual heatwave right now) I ordered up a very nicely done Vietnamese Iced Coffee, made up in a traditional stainless steel filter. Bubble tea, a very familiar sight back in California, is also available here for downtown-area patrons.

Red Velvet Cafe's official grand opening is set for this Saturday, March 14th at 11 AM.

The Early Bird: Ohio's winters are tough on mobile food businesses, and unfortunately it proved to rather tough for owner Libby Glover's rig and equipment. Temperatures below twenty degrees would force a closure of the food trailer for the day, and Glover herself took a winter break the last week of January. This turned out to be a timely move in hindsight considering that the Central Ohio region was hit with one of the colder months of February in recent memory.

However, good news is here for all you beignet lovers: Glover recently announced on her Facebook page that the Early Bird will be up and running again starting Monday, March 16th, promising some spring-inspired flavors to join some old beignet favorites to order with quality coffee (the Early Bird uses coffee beans from One Line Coffee.)

The Early Bird can be found parked in front of the Indianola Church of Christ, located on Indianola Avenue just north of Lane Avenue.

My initial Early Bird post can be found here.