Searching for promising local coffee purveyors in previously unvisited parts of the country has been one of my favorite pastimes since my spouse and I got together. Our Kansas visit list included a coffeehouse with a toast option as well as a place to hang out and find a book. 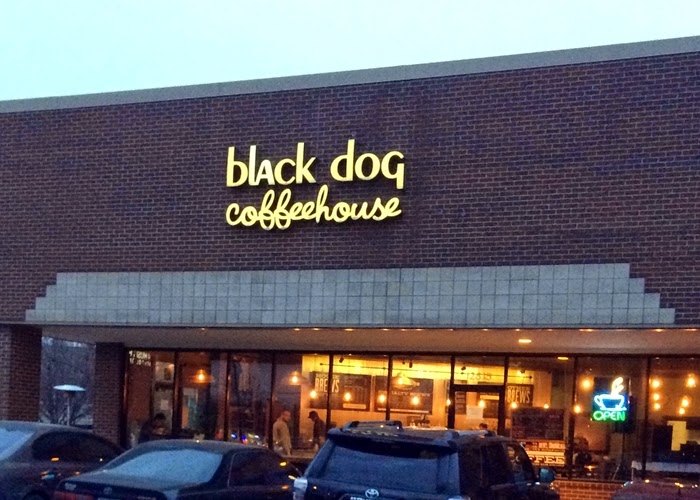 Black Dog Coffeehouse: Despite numerous owners over a decade-plus of existence, Black Dog has maintained both a culture and neighborhood focus that has earned it a loyal following in the region since its opening in 2003. On our visit, we were able to sample some of the changes that the Matsch Family, the business' latest owners, have brought to Black Dog much to our delight.

One such change the new owners put in was based on their research of so-called third-wave coffee shops around the country; as a result, Black Dog discontinued the self-service coffee dispensers in favor of coffee served by manual brewing and upgraded drip coffee equipment.

Other changes reveal how Black Dog has truly become a (Matsch) family affair: their coffee is sourced through area-roaster, Messenger Coffee, a company partly owned by John Matsch. Messenger focuses on sourcing the best coffees while paying farmers higher-than-Fair Trade pricing, according to their company website. As expected, our coffee drinks were quite good, matching some of the best we've had in the Columbus area.

Another change that is definitely a Matsch touch involves Black Dog's toast bar. John's brother Chris had returned to the area from a stint in California with the intent of opening up a bakery. Inspired by the growing toast movement on the west coast as well as the excellent products of bakeries like San Francisco's Mission-district based Tartine, the Matsch family created Ibis Bakery next door.

Black Dog features several loaves of Ibis' bread offerings every day in their toast bar. As opposed to Columbus' Dan The Baker's Toast Bar, this is more of a hearty breakfast (as toast goes, anyway) versus a sampling experience. Black Dog offers thick slices, with each variety of bread matched up with a particular spread. While the Rosemary Olive Oil toast slice, with a combo of butter, pesto and cream cheese was quite tasty, it paled in comparison to the Cranberry Walnut with butter, almond butter, honey and sea salt. 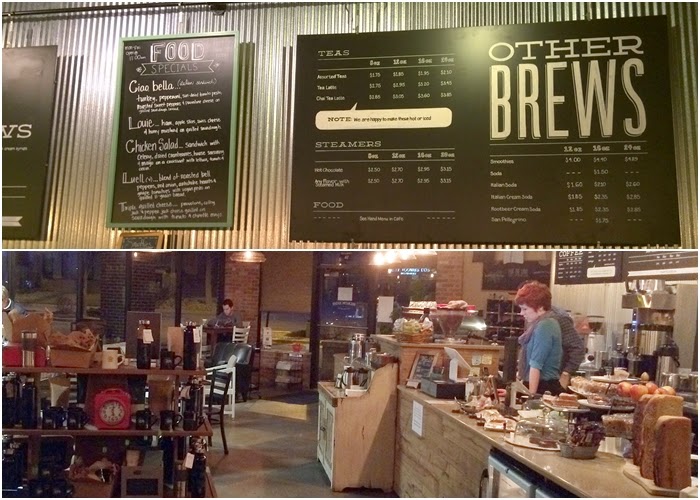 According to Ibis' baker Matt Matsch, the slow-rise process used in their breads allows those with celiac and gluten issues to consume their products, Related to this, Black Dog also offers a so-called "Gluten Free Tower" filled with various pastries. Special lunch-oriented items also are offered after 11 AM.

One thing that has not changed is the the coffeehouse's community focus, with live music, game nights and a weekly community farmer's market as regularly scheduled events. The fairly expansive interior space is well suited to handle a decently-sized crowd, and is nattily attired to allow for the now much-observed tradition of hanging out at the coffee shop for an hour or two. Based on our experience, you can definitely do a lot worse than end up at Black Dog for that time. 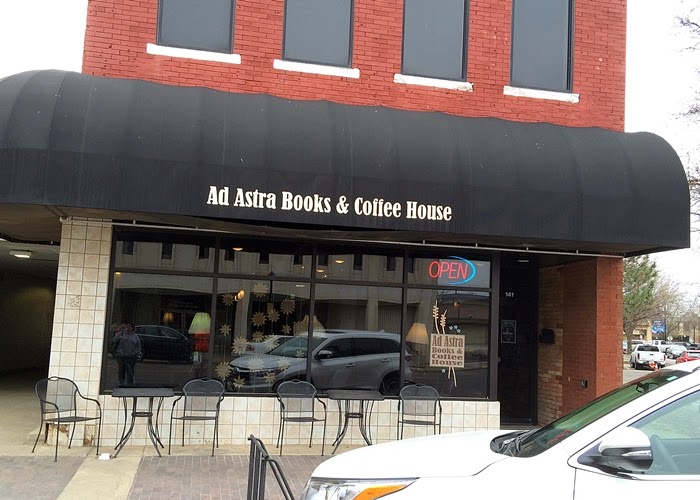 Ad Astra Coffee and Books: At a population of around 47,000, Salina ranks up there in size with Newark, Ohio in Licking County. But unlike Newark, which has sported local coffee shops from the folks at One Line/River Road since the early 2000s, it took Salina until November of 2011 to get a downtown shop to call its own in the form of Ad Astra.

With the opening date so close to the winter months, and being in a town that was more or less unfamiliar with the coffeehouse concept, Ad Astra struggled in its first few months. A successful Kickstarter campaign launched in early 2012 gave the fledgling business the needed funds to upgrade various aspects of its business as well as getting the word out that they actually existed. The funds apparently were spent pretty wisely, as it allowed my spouse and I some extra caffeination to survive the relatively numbing stretch of I-70 through western Kansas to the Colorado border.

The pairing of coffee shop and book store is pretty ubiquitous these days, especially with the proliferation of big box retailer Barnes and Noble and coffee giant Starbucks. However, there's just something truly appealing about this combo at the local level, as we have experienced at places like Malaprop's Bookstore and Cafe in Asheville, NC, Indeed, there's plenty of space to hangout within Ad Astra's appealing interior.

Ad Astra is operated as a worker cooperative, similar to Pattycake Bakery in Columbus and The Cheese Board in Berkeley, CA. My spouse asked the barista about what he would recommend on ice and came through with a rather delicious dirty chai with a shot of espresso. I went with a more conventional iced latte, which turned out to be a notch up from the big-chain versions like Starbucks and similar.

Other than the regular community events, Ad Astra's operations help out local businesses, using the roasted coffee beans of Blacksmith Coffee out of nearby Little Sweden-based town of Lindsborg.

While a Starbucks might be more conveniently located for I-70 travelers going through Salina, those looking for something a little more should take a little detour "to the stars" (the literal translation of Ad Astra from Latin) for a nicely rewarding experience.