As I briefly mentioned in a prior post on a trip out to China Village in California, my spouse and I have discovered that Szechuan restaurants were not too common in the Columbus metro area. We both have come to love the ma la combination of Szechuan peppers and hot chilis that are typical of the cuisine, and our go to here has typically been Fortune Restaurant on Olentangy River Road.

Late last year, I heard some word through the grapevine that Hong Kong House, home of the former Hong Kong Buffet (a place neither my spouse or I had visited), had switched to a more conventional dine-in restaurant with a focus on traditional Szechuan dishes. Of course, this knowledge merited a fairly quick visit soon after to their location at the corner of Henderson and Reed Roads to see what they had on the menu (at the time, I couldn't seem to locate a website for the restaurant.)

Upon arrival, I spied a dry-ink board with the restaurant's specials written in Chinese. I also took a look at the diners in house: pretty much every one I spotted then, along with other visitors who arrived while I waited for my order (we decided on take out on this visit), appeared to be of Chinese descent.  Chalk up two notches in the "promising" department. The main menu proved to be the third promising notch: while there was one side devoted to more standard "Americanized" Chinese dishes, the back side had a substantial number of menu items similar to what I have seen at other Szechuan restaurants.

Wanting to have a comparison point, we ordered Hong Kong House's closest dishes to three of our Fortune Restuarant favorites (Dan Dan Noodles and Dry Fried Green Beans and Dry Fried Beef)  to use as benchmarks; all their dishes compared favorably with Fortune with some slight variations (Hong Kong House's green beans, for instance, were not ma la, but provided a nice garlicky-kick instead.)

Another aspect to these restaurants I had mentioned in my previous blog post was how these types of Chinese restaurants were perfect venues for a group outing, especially for diners willing to go beyond the standards. My spouse and I have been good for each other in terms of our food adventurousness, and we were looking forward to sampling more of Hong Kong House's extensive menu, despite realizing this would be something of a longer-term questing.


Here's where two of the most adventurous eaters in Central Ohio enter the picture: Bethia Woolf and Andy Dehus, founders of Columbus Food Adventures as well as just this region's ultimate online resources for this region's ethnic restaurants, taco trucks and mobile cuisine (alteatscolumbus.com, tacotruckscolumbus.com and streeteatscolumbus.com, respectively.) Some of my blog posts on our Columbus Food Adventures tour experiences (all quite excellent) and ethnic restaurant visits had led to a bit of a familiarity with each other through social media exchanges. Perhaps it was only natural that when the topic of Szechwan cuisine and Hong Kong House and our desire to explore the menu further came up, they would posit the idea: "Would you like to meetup for dinner there sometime perhaps?"

Is there any other answer to this question than "Yes, we would love to?" Nope, didn't think so.

Hong Kong House's interior decor is typically Chinese-restaurant appropriate, with artwork, tchotchkes  and other appropriate flourishes that stay somewhat bit masked with the dimly lit interior, Plenty of large round tables are present, giving visual evidence of this restaurant's ability to handle large groups of people. However, there are seats to the side where a couple can have a more intimate experience with each other. A bar is also available in the back for adult beverage orders. 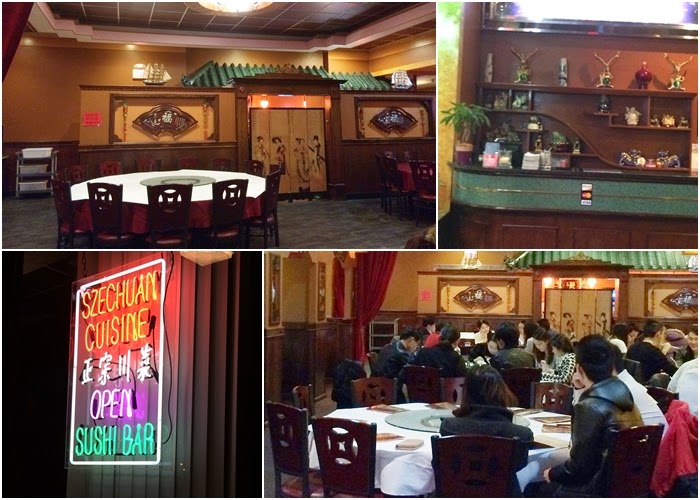 We were joined at dinner at one of the large round tables by several of Bethia and Andy's colleagues, almost all of them familiar with numerous Hong Kong House dishes. With all the menu familiarity from those at the table, plus the nature of the meal where we would all be sharing our dishes family-style, we figured there would be more than enough food ordered, and we were eager to sample the favorites of our gathered guests were.

For us, there really wasn't a bad dish in the bunch. Standouts for us included the Cumin Lamb, the Wontons in Hot Chili Oil (both of which seemed to be universally liked) and the Spicy Diced Chicken (which gave me fond memories of China Village's 1000 Chili Pepper Chicken). Things that would probably scare most people, such as the Dry Fried Pork Intestine and Eggplant with Salted Fish in a Hot Pot were quite enjoyable. With the richness of many of the dishes ordered, the simpler preparations such as the Potato Shreds (had a nice gingery kick) and the Water Spinach with Garlic were provided a nice break.

Equally satisfying for us was our company for the night. While my spouse and I played the role of newcomers in relation to the group, we never felt out of sorts. I am, by nature, someone who loves to observe and absorb a conversation, and the variety of topics and experiences that Bethia, Andy and their colleagues threw out during the dinner added another element to savor this night.  We definitely hope that there are future gatherings like this down the road.

Service-wise, I have experienced no issues with Hong Kong House. Our initial takeout order came out relatively quickly, and in regard to the group dinner, dishes were also delivered in relatively rapid-fire succession such that our Lazy Susan was inundated. They were also nice enough to split up the bill evenly among our party, a process that not all restaurants are wont to perform.

With Hong Kong House, we can safely say that we now have two destination places for Szechuan cuisine in the Columbus area, and look forward to comparing the best of this eatery to what Fortune (or, for that matter, any other newcomer) has to offer. Hong Kong House's remake may not have appealed to those who were more in tune to the previous buffet-oriented incarnation; however, for those who are willing to venture forth a little from the norm, Hong Kong House definitely gives you plenty of what we have found to be tasty options.