One thing that drew us to Asheville in the first place was their status as a craft beer mecca. Our first two visits, within one year of each other, introduced us to a nice swath of the area's craft brewers, including a very early visit to Wicked Weed Brewing, Green Man Brewing, Asheville Brewing, and the Brevard-located production facility of Colorado-based Oskar Blues.

You can expect a lot of changes with a four-year gap between the second and third visits, and sure enough, that turned out to be the case. Out of the big names, New Belgium and Sierra Nevada (as much as we tried, we couldn't make a companion trip to their Mills River location to pair up with our Chico trip a reality) have joined Oskar Blues as national breweries setting up shop in the area. Wicked Weed has also joined the big boys with their purchase by AB InBev in their so-called "High End" division, a move which shocked many in the craft beer world. And there are plenty of new breweries that have joined old guard members like Wedge, Highland, and French Broad.

With our time limited, we decided to drop by a brewery that impressed us greatly on our last visit and one brewery on the outskirts of town that has been impressing with their brews made from numerous locally-produced ingredients. 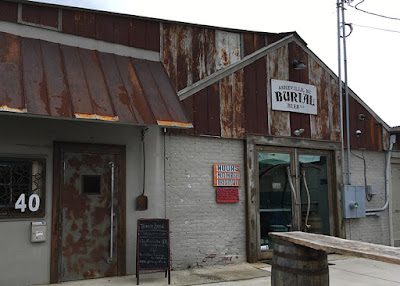 Similar to Wicked Weed, our first visit to Burial was roughly 9 months after this nano-brewery opened its doors to the public in June of 2013. Everything we had then from their Donut Skillet Stout to their Scythe Rye Pale Ale to their Fourche Biere de Mars was nothing less than very good. Since then, additional tasting opportunities from well-connected friends and relatives and a beer showcase event at Clintonville's The Crest Gastropub (Burial has been featuring their brews at various tasting events around the Buckeye State over the past year or so) made this a must-return-visit on this trip. 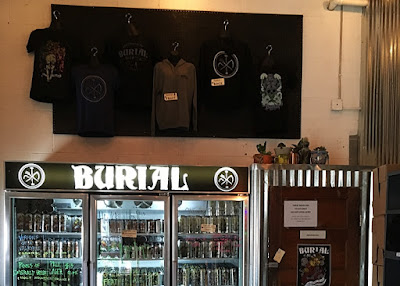 Since that last visit, a few things have changed at Burial with expanded distribution to four states, a space with beers-to-go and merchandise, and the continuing construction on their Forestry Camp craft beer bar, a facility scheduled to open up later this year that will up their annual production from 1,600 to 10,000 barrels.  In addition, a brunch pairing with Asheville-area food truck Salt & Smoke turned into a full-fledged kitchen at their South Slope taproom, with seasonal dishes that are meant to pair up well with whatever Burial has on tap any given week. 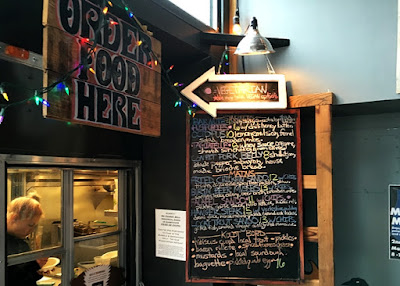 Another thing that naturally has changed is the larger number of beers available on tap. Of course, this meant we wouldn't be able to sample everything unlike last visit, but despite that limitation, our selections all proved to be no less than very good, with extra kudos to their The Veil Behind The Curtain (a Saison brewed with wildflowers and honey) and their This Undercarriage to Oblivion DIPA (a simply delicious blend of Azacca and Simcoe hops, mango and peach.) 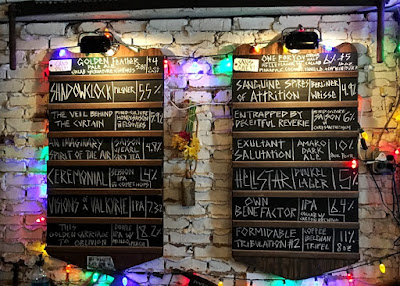 Someone with an keen interest in the craft beer world might wonder how much truth a story on the subject from a non-brewery-industry-specific source like Food & Wine might have. However, in the case of Morganton's Fonta Flora Brewing, their assertion that the Tar Heel State's best beer isn't from Asheville might have some serious merit. 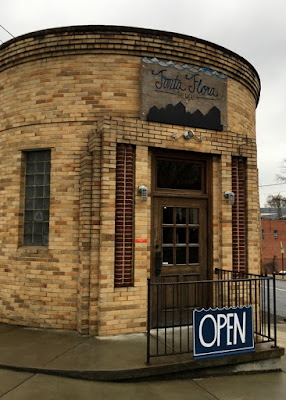 Opened in 2013 by brothers Mark and David Bennett and brewmaster Todd Boera, Fonta Flora's heavy focus on locally and seasonally sourced agricultural products has earned it a high respect level in the craft beer world, with several Great American Beer Festival (GABF) medals and national media attention from outside-industry sources like Food & Wine and CNBC on its mantel . In fact, the brewery's name itself, a reference to an African-American sharecropper village that was wiped out when hydroelectric power was brought to the region, reflects their focus on their rustic, surrounding lands. 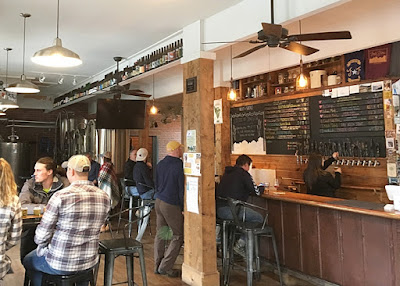 Reflecting their rustic surroundings, Fonta Flora's taproom is a laid back affair, with the main focus on the beer (a few random snacks are available as sustenance) and, on this day, some regional music (the Wilmington-based Stray Local, who would easily fit into the music rotation of Columbus' Rambling House Soda) on tap. Throughout our stay, a steady stream of what seemed to be mainly locals wandered in to sample the brewery's latest offerings (on an interesting, Ohio-based side note, the men's bathroom (inexplicably?) sported a poster of the skyline of Cleveland.) 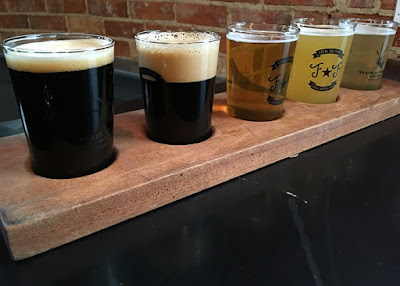 On this visit, we decided to split a sampler paddle and grab a couple pints of whatever else sounded interesting. Pretty much every brew reflected some connection to local ingredients, from the Charleston Gold (using Charleston Gold Rice) to the Wolf Spit (a collaboration Baltic Porter with Half Acre Brewing brewed with Hickory Bark.) And similar to our experience at Burial, Fonta Flora's beers were all interesting to very, very good, with extra love to their Urban Monk Carrot Cake variant (an Imperial Stout with all the ingredients you'd find in a carrot cake) and their Need A Hug (a wild ale brewed with local blueberries and elderberries and fermented in oak barrels.)

Taking after their Austin, TX compatriots Jester King, Fonta Flora has taken the next step toward becoming a true farmhouse brewery, obtaining land just to the north of the existing location on an abandoned dairy property. The property will not only expand and enhance their brewing operations, but also benefit local conservation efforts with the addition of land to an adjoining state park. Not that we needed another excuse to make a return trip to this brewery in the future, but the completion of this facility only whets our appetite just that much more.