One of the first conversations my spouse and I had when we were still in the dating phase was neighborhoods we would like to settle in should we eventually decide to call the Columbus area our home. Not surprisingly, most of our focus, whether it was economically feasible or not, centered on the neighborhoods with a mix of retail and dining within fairly easy walking distance. 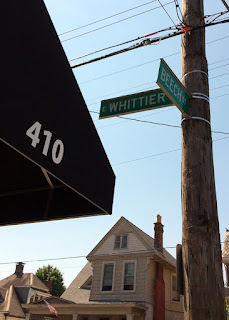 We've found many of the areas had eateries that we've considered "dangerous" next to live to only in that we'd be tempted to drop by there on a whim on almost any day. And then there are eateries such as Skillet, somewhat nondescript at the corner of Beech and Whittier in the Schumacher Place neighborhood, which go into an even more exclusive WWWLC (We Wished We Lived Closer) Club.

As diverse as we've found Columbus' culinary scene, and as adventurous as we try to be in exploring new places, Skillet would be a place that would automatically prompt weekly visits if we lived closer. But alas, 'tis not the case for us, so we make due with our irregular regular status, keeping Skillet always in the back of our mind always as a potential dining spot. It gets even more prominence as a destination should we be hosting friends or family in town. 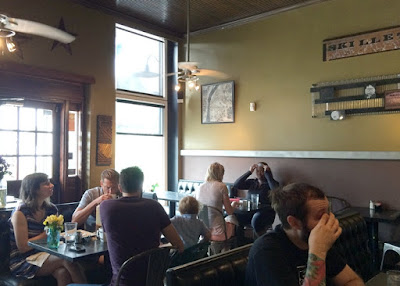 As noted in this Stock & Barrel Magazine interview with the Caskey family, Skillet's owners, head chef Kevin Caskey intended Skillet's wanted his eatery to be "warm and approachable", not "complicated." Indeed, the most complicated aspect of this eatery relates to trying to obtain a table, due to the limited operating hours (Wednesdays through Sundays, 8 AM to 2 PM) and due to the space (parties of more than four are not recommended.)

Skillet's longtime tagline has been "Rustic. Urban. Food." and both the eatery's atmosphere and offerings wend through those three words quite comfortably. Skillet's interior checks off both the rustic and urban boxes decor-wise in a very cozy space. The menu also strikes this chord; while it changes often with what is seasonally available, many of the items seem quite familiar, such as their Griddled Cinnamon Roll and Huevos Rancheros. Familiarity does not mean the same old same old in terms of execution, however: for example, take their deicious Stuffed French Toast, made with Lucky Cat Bakery (from Granville) multi-grain bread stuffed with Gallipolis-located Laurel Valley Creamery Cloverton and fresh local strawberries and maple syrup. 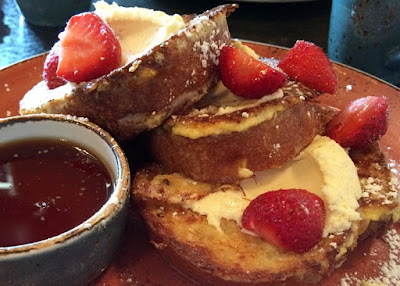 Likewise, some basic side items sport more than punch than their typical diner counterparts. The House Smoked Not Too Spicy Andouille Sausage impressed a friend who had spent a fair amount of their life in Cajun country we had taken in for a meal. Also, their Spring Onion Home Fries, made with fingerling potatoes, might be my favorite such side dish that I've tried around town. 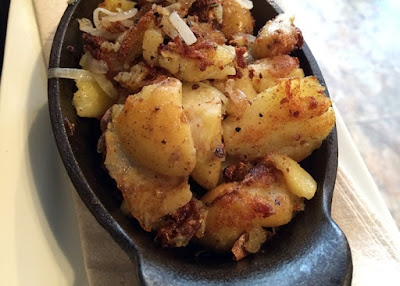 Sometimes, it's just fun to get a peek of the stuff that you did NOT order as it sits on the counter, waiting to be delivered to its hungry diner, in order to take mental notes for future visits. 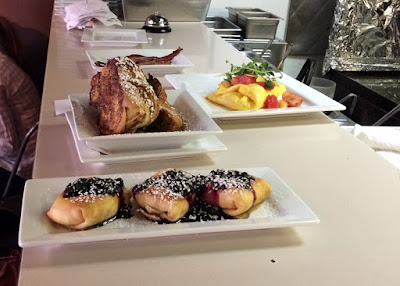 Even the items that venture a little toward the fancy (mainly, those with seafood or game animals) just add to that rustic credo. The Country Fried Quail adds spicy watermelon and sriracha pepper jelly to a buttermilk and hot-sauce-brined Ohio bird on top of a biscuit. In addiiton, their Curry Crab, while touted as "not local but worth it", sported a pan-fried Virginia soft-shell crab with red coconut curry, ramp kimchi, cucumber and a local poached egg in a sandwich roll.  It would've been easy for the delicate taste of the crab to be overwhelmed by its potent counterparts, but credit goes to the chef for harmoniously blending these taste profiles. 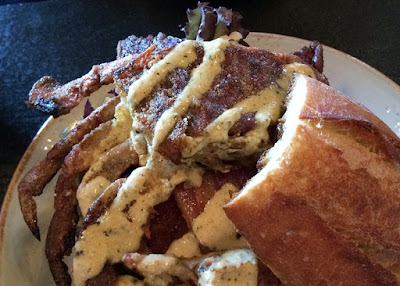 While it may be preaching to the choir a bit to the locals, Skillet is most definitely a lgem that's worth getting to no matter where in this metro you live. In some ways, this is a post for those coming to visit the area - while it may take some effort to get inside for a meal (weekdays do tend to be easier to land a table as expected, and the eatery offers free coffee from local roasters Cafe Brioso for those waiting on the weekends), it's most definitely worth your while to do so. If you're really lucky, you'll have some friends and/or family in the area who have a visit scheduled on the docket for you. 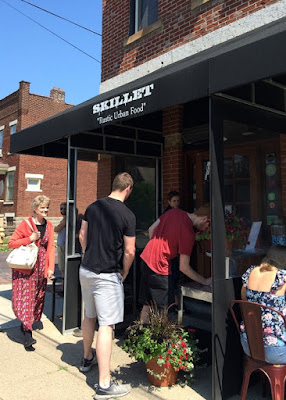 Note: My lovely spouse pointed out to me that I mixed up the description on her crab dish. Needless to say, the Soft-Shell Crab BLT actually pictured was highly delicious, sporting dry cured bacon, "Oooh - eee!" Sauce, and tomatoes on Lucky Cat French Bread, without losing the delicate crab flavor. This also helps explain why she gets to eat all the crab on our excursions, a fact she doesn't mind at all. :-)
Posted by Joe