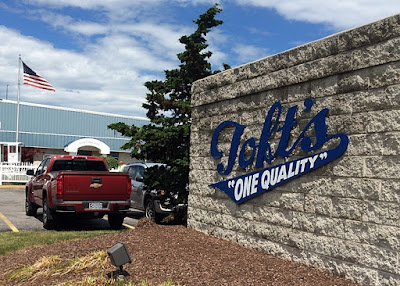 During my first year of these Ice Cream Chronicles, I got the pleasure of experiencing the ice cream from Toft's, founded in 1900 and holding the honor of being Ohio's oldest operating dairy. Alas, I was chagrined to find out during my most recent travels through Fremont that the small little company store located in town had closed down.

That fact, combined with the intensely hot and humid weather we experienced during our Cleveland mini-excursion, meant only one thing: it was time to venture directly to the source - Toft's combination headquarters and ice cream parlor located in Sandusky, home of the famed Cedar Point Amusement Park. Toft's parlor at its corporate headquarters reminds me somewhat a bit of a convenience store, save for the prominent aisle railings and elongated ice cream freezer counter. Along the side, freezers and shelves carrying products tilting (not surprisingly) to what the company produces could be found. If you looked hard enough, a select inventory of non-company local items were also available here, such as the highly ubiquitous (for this part of the state, anyway) Ballreich's Chips out of Tiffin. 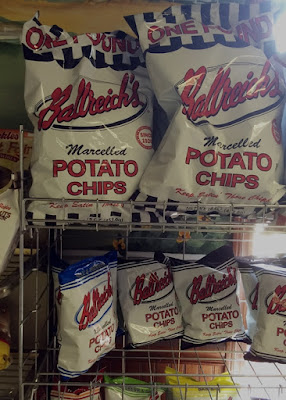 Of course, the star attraction here is the ice cream. While pints and gallons of Toft's various flavors are available to grab and go, I imagine a vast majority of folks making the trek here most days are here for the freshly dug out scoops. 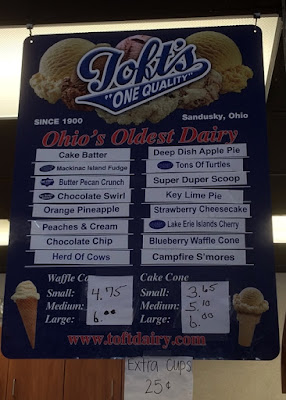 We decided this first visit here required ventures into new flavors, and after some discussion we decided that two small orders were the way to go - my spouse went for the Black Walnut and Lake Erie Island Cherry, while I was going to match up Coconut Cream Pie with something to be determined. But then, that's when Toft's generosity, something I had heard about through places like the CMH Gourmand's blog, threw a kink into those plans. 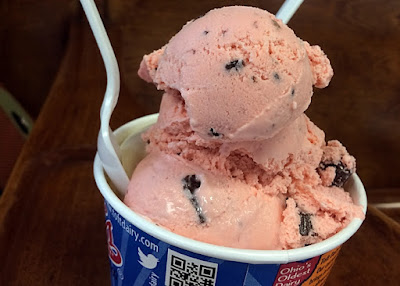 Once my spouse was handed her order, she shook her head and turned to me, her eyes slightly goggled at the mass quantity of ice cream that had been handed to her. "There's no way I'm going finish this."  I looked at the massive scoops in her cup and, after a slight bit of hesitation (I was really jonesing for something coconut at that moment) I had to agree. I like my ice cream, but two orders of a "small" size was a bit too much volume for us to handle.

As we grabbed a seat (a really neat row of old-time wooden schoolhouse-style seats with highly convenient built-in trays) along the back wall and worked on our mound of churned deliciousness, we chatted up a couple from out-of-state who sat next to us. They were also similarly wide-eyed at the substantial size of their small orders, and had thrown in the added challenge of getting their ice cream in waffle cones.

At first, I considered whether they were someone to be envied or pitied by their "plight" of copious amounts of ice cream. I eventually concluded that if you're driving through the area like they were, you might as well go for the gusto. 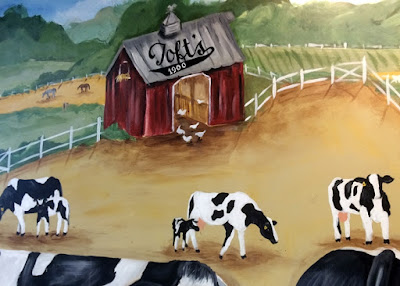