Christmas in San Francisco has become a tradition for us on our trips back to the West Coast. Perhaps the most unusual thing about this trip was it was the only day we made our way into "The City by the Bay" (cue background "whoa-whoas" by Steve Perry now.)

Of course, with the day being Christmas, the venues that are open are limited, and those that are are often jam-packed with people wanting to get out of the house for the day. We both agreed very early on that the touristy places were generally ones to avoid, but slowly but surely they have made an appearance on our itineraries with a bit more regularity. On this day, we journeyed to Golden Gate Park for a visit to a place neither of us had ever visited before: the Japanese Tea Garden. 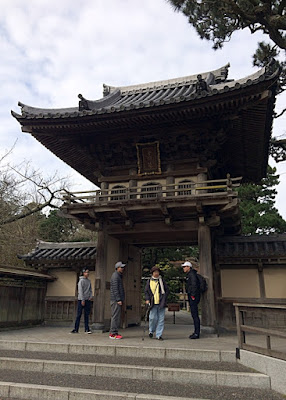 Born out of (and the only remaining exhibit from) the California Midwinter International Exposition in 1894, the Japanese Tea Garden is the oldest such undertaking in the United States. At that time, most Americans knew little about Japanese culture, but the garden was seen as a way to help bridge that gap. Through the efforts of Golden Gate Park Superintendent John McLaren, businessman George Turner Marsh, and landscape designer Makoto Hagiwara, the garden lived on past the close of the exposition, maintained by Hagiwara and his descendants (who actually resided within the park) for nearly four decades.

(In a unique bit of trivia, the fortune cookie, associated with Chinese restaurants, is actually a Japanese invention; the head of the Hagiwara clan, Makoto, is credited with either inventing or helping introduce the fortune cookie to America, depending on the story version you read.)

The pagoda-styled entrance, which is pictured above, does little to prepare you for how much ground the garden actually covers (roughly five acres) once inside the gate. I had figured the grounds would take 20 minutes on a normal day to cover, maybe 30 with the crowds this day, but I was disabused of that notion when I saw how pathways wended to places beyond the visible greenery and structures. 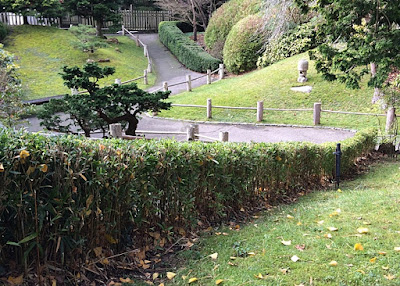 The garden these days bears little resemblance to the one the Hagiwara family had originally constructed. Like other Japanese-Americans, the Hagiwara descendants (the elder Makoto passed away in 1925) were forced into internment camps during World War II. The park (somewhat clumsily renamed the Oriental Tea Garden) fell into disrepair due to the loss of expertise to keep the park maintained, and the backing out of a promise by the city of San Francisco to return management of the park to the Hagiwaras after their release did not help either.

Over time, efforts have brought back a taste of the original garden via restoration of the garden gates and the return of some rare plants the Hagiwaras took with them to the internment camps. Other items added since World War II include a large Buddha statue in 1949, a 9,000 lb bronze Peace Lantern in 1953, and a plaque recognizing the family's contributions in 1973. Regardless of how much the garden actually resembles the original rendition these days, the feeling of peace and calm one gets when sauntering by koi-filled ponds, pagoda structures, and the well-manicured greenery cannot be denied. 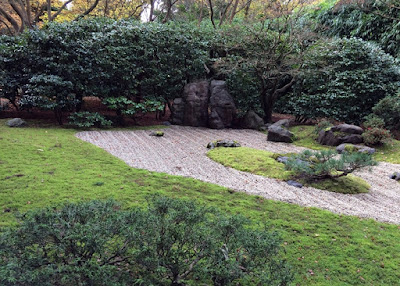 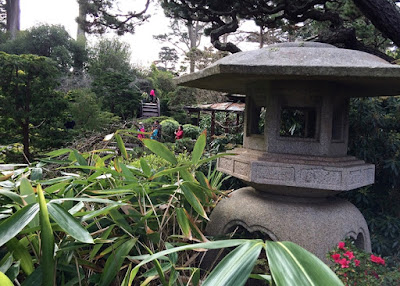 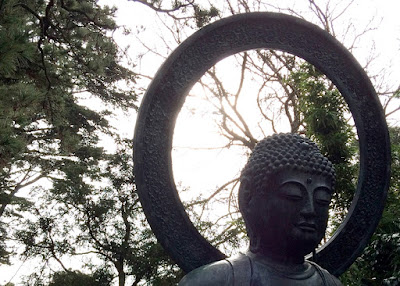 It almost seems logical that in a tea garden, you would have the opportunity the have some tea. Indeed, the modest tea stand in the middle of the park was doing brisk business on a relatively chilly Bay Area morning, and these hot, herbal liquids paired up with a variety of mochi proved to be a perfect break in our wanderings. 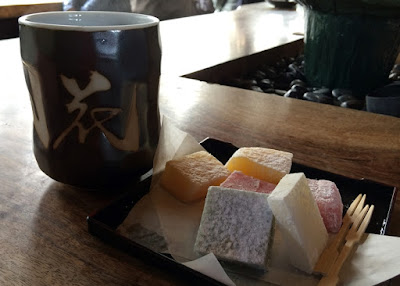 Perhaps the best thing about visiting the Japanese Tea Garden on Christmas is the admission price, which is always free for the holiday (free admission can also be had on Monday, Wednesday and Friday if you arrive before 10 AM,) Still, the modest admission price anytime else ($8 or less, depending on your resident/non-resident/age status) makes this a well-worth it stop if you're in town visiting Golden Gate Park.

Afterward, we took a quick trip up to nearby Baker Beach, perhaps the best beach in San Francisco for getting views of a skyclad Golden Gate Bridge as well as skyclad derring-doers (the north side of the beach is designated as "clothing optional.") However, on this chilly, somewhat breezy day, the tankers going under the bridge outscored the nudists 3-nil.

After our beach visit, it was time for lunch. As on all our trips to the Bay Area, we're always looking for some cuisines you can't really get in Columbus. One of the primary targets is Burmese, with Mandalay traditionally being our destination. However, we wanted to try something different this year so we ventured over to where Burmese Kitchen's location in the Richmond District.

A quick check of their website via mobile phone would've confirmed what we found out in person: they were (sadly) closed through the holidays. Thankfully for us, however, we didn't have to travel far (in fact, right next door) for our meal, once we spied the "Spicy Hot Pot" sign hoisted above. 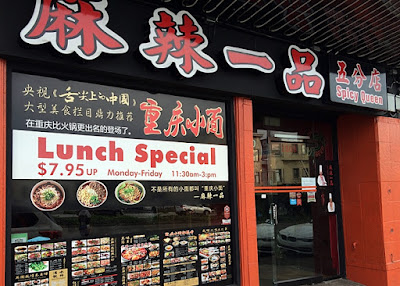 Chinese restaurants in general are popular destination restaurants Christmas day and, despite it being late afternoon, Spicy Queen was still fairly busy. We got the hint by the advertised hot pot and the strikingly bold Chinese language characters outside that this was not an Americanized version of the cuisine; sure enough, the almost exclusively Chinese customer base inside and the hot pot mechanisms on the table themselves seemed to confirm we were at the real deal. 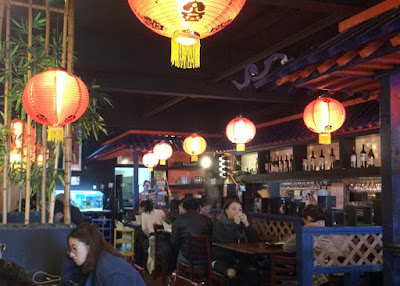 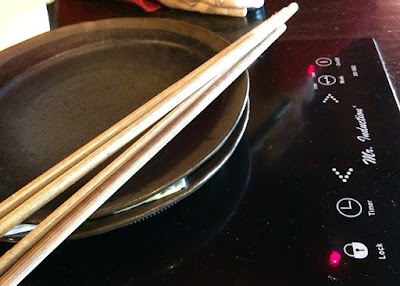 The front of the menu sported the two men who I assume are the head chefs at Spicy Queen. I don't know their history, but all those medals around their necks sure didn't hurt their outward credibility. 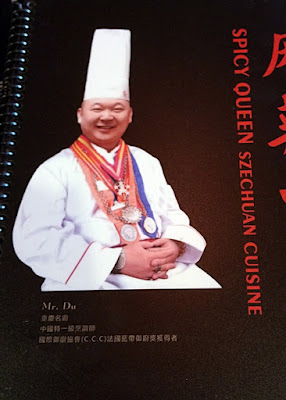 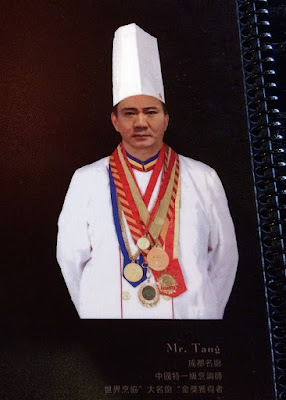 This turned out to be the only place on this particular trip that gave us an opportunity to be adventurous with a dish or two. In this case, the Pork Intestine with Szechuan Pickled Mustard was the qualifier, a bit of an accident in that  I had intended to order a spicy ma la version of he dish. The intestines were plentiful and prepared about as unchewy and tender as I imagine they can be, and contrasted uniquely with sharp, lightly puckering taste profile of the accompanying mustard and broth. Color this dish as one that we were glad to try (we finished it all) and one that didn't dissuade us from ordering intestine-based dishes in the future either. 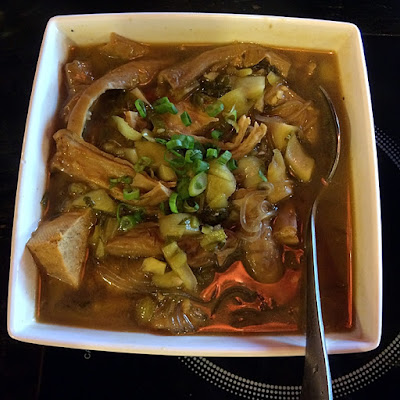 Spicy Queen's Ma Po Tofu was prepared quite exquisitely, with a subtle ma la taste profile and tofu that was silky smooth. These tender cubes were sometimes a challenge to handle with chopsticks but we managed just fine. 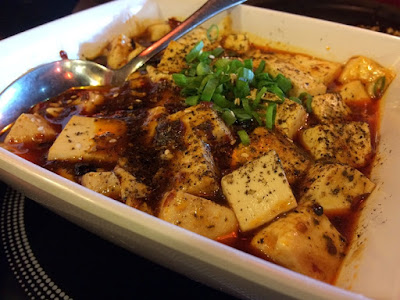 Spicy Queen's menu is pretty extensive, from its hot pot selections all the way down to their appetizers. We had a tough time deciding on the latter, but our server came through with a solid suggestion of the Sliced Pork Belly with Spicy Garlic Sauce. We're both quite compatible in the (lots of) garlic category, and this dish hit us with a good solid allicin-laced right cross with a followup quick jab of spicy heat, making it our favorite dish of the trifecta we ordered. 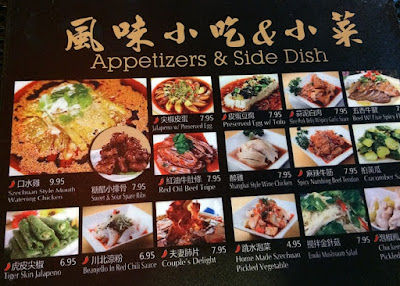 For Columbus-area fans of hot pot or Sichuan cuisine in general seeking out the same in the Bay Area, you could do a lot worse than Spicy Queen.