We stopped into a shop we passed along the way
Well we sat down on our seats and we began to say
We know you like you to bake, and you know we're gonna' stay
California brunchin' on such a winter's day

One thing we noticed during our first excursion through California's North Coast area is the plethora of drive-thru coffee places. Anchored by the Grants Pass, Oregon-based Dutch Bros., a franchise with 270+ locations scattered through the Western U.S., it seems every town you pass has at least one such place, perhaps inspired as much by the long distances you have to drive between towns as much as the sheer number of overcast days found in the region. When Mother Nature's natural pickup is blocked overhead, a little caffeine enhancement is almost a must.

For us, drive-thru coffee was not in the cards on this California excursion, but it didn't mean we didn't find places to enjoy a good cup of java. Even better, the places we stopped by provided both unique atmospheres and some good eats to accompany our morning caffeine. 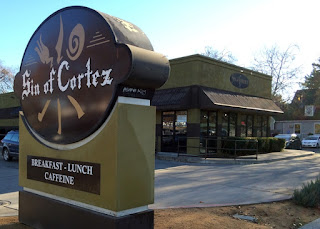 We admit it was the unusual business name (at first I read it as "Sin Cortez" or "Without Cortez", which would still be unique) that drew our attention to this potential destination. Regardless of what the name actually refers to (I read one article where it refers to Spanish explorer's Hernándo Cortés and his actions in Mexico that led to the Spanish conquest of the Aztec people), one can rest assured that the popular, Chico-based namesake restaurant doesn't try to subjugate its customer base. Starting operations in the year of Prince (1999), Sin of Cortez moved to its current location, a location filled with many fast-food chain failures, on the Esplanade in 2002. For coffee lovers, the outdoor sign is promising, as caffeine is given its own separate place along with breakfast and lunch. 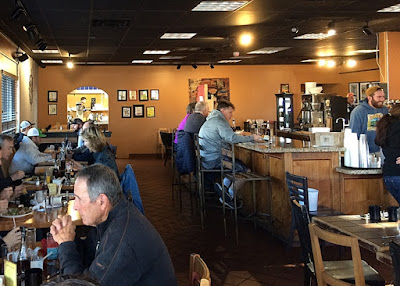 The logoed door mat as you walk in adds even more to the java equation, as phrases like "Black as Hell" and "Strong as Death" encircle the restaurant's name. For the Columbus native, this eatery reminds of a combo of Starliner Diner with less kitsch and Caffe Apropos, with a slight bit less of a homey feel. Cushy couches do provide a comfy waiting spot near the entrance; tall chairs ring a central coffee bar area, while a collection of tables and chairs providing seating around the periphery. Even on this winter break weekday, the cafe still received a steady stream of customers throughout our stay. 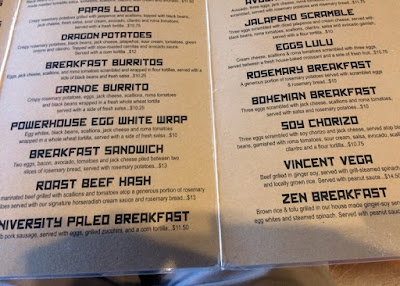 The menu mixes doses of breakfast standards (pancakes and french toast) with a little Mexican influence (Carnitas Quesadilla and Breakfast Tamales) and a lot of California crunchy granola (the Vincent Vega (beef grilled in ginger soy with spinach and rice) and the Zen Breakfast, with brown rice and ginger-soy tofu with egg whites and spinach.) A nod to modern fitness trends is also available in the almost all protein University Paleo Breakfast. 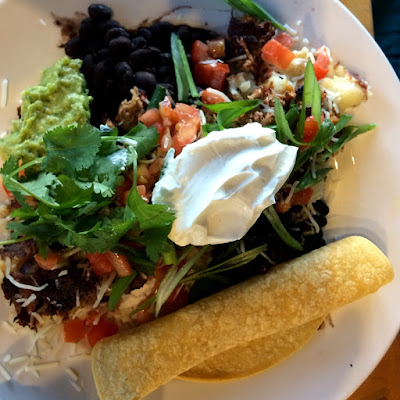 We had no complaints about our breakfast dishes: my Ranchero Verde and my spouse's Dragon Potatoes with Carnitas, were appropriately appetizing and came in what I've come to call Ohio-sized portions. Meanwhile, the much ballyhooed coffee also held up its end in terms of sumptuous caffeination, via my spouse's Cafe Con Chocolate (house coffee with Mexican Chocolate plus whipped cream and Ibarra chocolate shavings) and my Hammerhead (espresso blended house coffee,)

One note for new visitors: Sin of Cortez remains a cash-only institution. For those who forget to bring your greenbacks, an ATM machine (which uniquely dispenses $10 bills only) is available to save you a trip to a nearby bank. 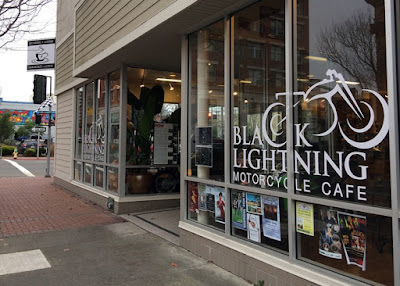 Our initial destination in Eureka for breakfast happened to be another cross-cultural eatery in long-time town bagel provider Los Bagel, inspired mainly by the mixed heritage of co-owner Dennis Rael (Mexican father and Jewish mother.) To our chagrin, however, this eatery was closed on the day of our visit, perhaps a nod to their former unique practice of being closed on Tuesdays (this ended when the business reached its 25th anniversary.)

This is where one of those seemingly tireless workers waving those arrow signs on the corner came in handy for us. The business name, which referenced motorcycles, didn't exactly scream breakfast to us, but heaven knows we are not afraid of finding meals in unique places. Such was the case with the Black Lightning Motorcycle Cafe. 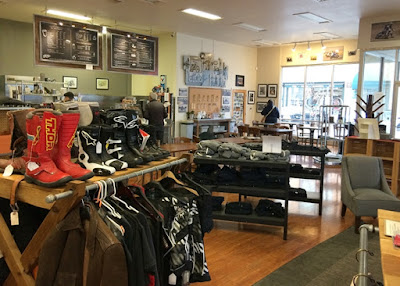 Opened in late 2013 by owner Jeff Hesseltine, this cafe in downtown Eureka provides a striking and appealing combination of businesses, especially if you have a hankering for motorbikes. Two-thirds of the space is dedicated to all things bike related, from equipment (both new and consigned), media and memorabilia, and of course, several examples of these two-wheeled machines. Even as someone who has, to paraphrase movie character Danny Vermin of Johnny Dangerously fame, rode a motorcycle once....once, the bike-related paraphernalia provided more than a pleasant diversion. 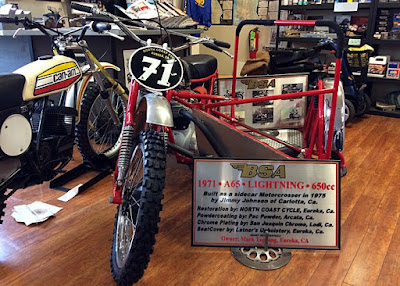 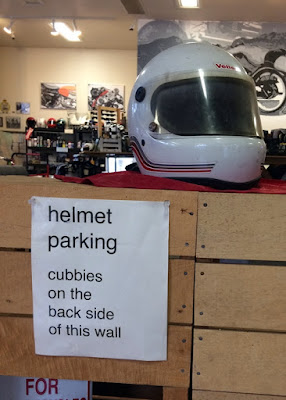 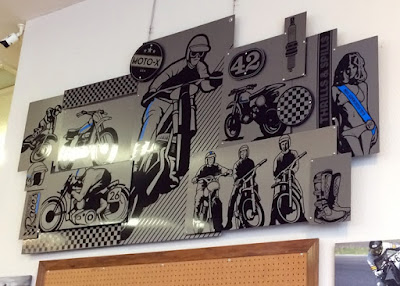 The cafe side occupies the other one-third of the space. Black Lightning offers a fairly typical collection of breakfast and lunch items with motorcycle-themed names, but one lunch item in particular provides a good deal of intrigue, especially for Midwest and/or British ex-pats, in the Beef Pasty.

As Hesseltine explained to us when we asked about it, the Pasty on the menu is the Cornish variety (he said he family roots from that Cornwall area of England) and not the variety you find through the Upper Peninsula region of Michigan. Even more tantalizing was that the pasties were being prepared as we stood at the counter deciding what to order, as well as the presence of select local craft beer on tap (including two breweries we had visited and blogged about in Six Rivers and Redwood Curtain.) 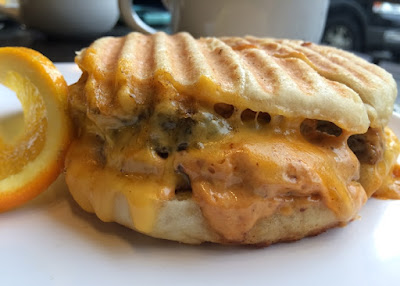 Alas, lunch wasn't in the offing yet, so we went for a couple of the cafe's breakfast offerings in Breakfast Sandwich (in a nice touch, the sandwich came inside a griddled English Muffin) as well as Breakfast Quesadilla, which sported one of my spouse's favorite cheeses in the Humboldt Fog, a goat cheese made by Cypress Grove in nearby Arcata. Paired up with some well made coffee drinks, it made for a great start on a day that promised some long hours on the asphalt.