Our recent Northern Michigan travels brought us to two destinations on somewhat opposite sides of the state that are worthy of a visit for their craft alcoholic beverages. 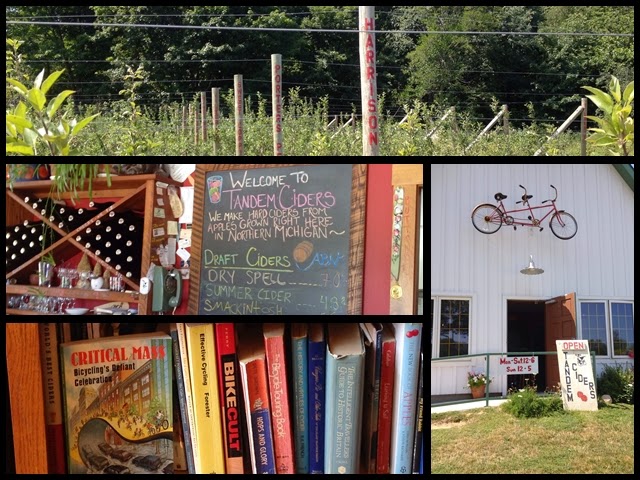 Tandem Ciders - This charming hard cider maker is located a bit off the beaten track in the tree-dotted rolling green hills that make up the interior of the Leelenau Peninsula. Thankfully, the large barn-like structure which houses this now six-year-old business, marked distinctly by a mounted tandem bicycle, all but ensures that visitors won't drive past.

Besides the main building, the property is marked by an apple orchard featuring the cidery's numerous apple varietals toward the rear as well as picnic tables where you can enjoy your cider outdoors.

The tasting room itself is a quaint space that maintains the barn motif, with a small bar area for customers there to sample their ciders. Bookshelves containing both apple- and bicycle-related books can be found behind the bar along with the keg system; themed art work only accentuates this heaven-like setting for cider seekers .

Tandem has a very consumer-friendly policy when it comes to sampling their ciders. Their four ciders on tap can be sampled for free; any cider that they bottle is also available for sampling for only $1 (save for their specialty Pomona; more on this later.)

We were highly impressed with all the ciders available, which ran a gamut of flavor profiles from sweet to tart, varietal oriented (i.e. their popular Smackintosh) and varying levels of dryness. Each cider had something unique that made choosing what to take back with us to Columbus a difficult decision. Eventually, we decided on the Pretty Penny (an intriguing blend of what is essentially the remnants of their 30 apple varietals used in their cider production; due to this, the taste is never the same year to year) and their Pomona (an intensely flavored Pommeau meant as an aperitif made by blending apple brandy and sweet cider and aging the mixture in oak barrels.) 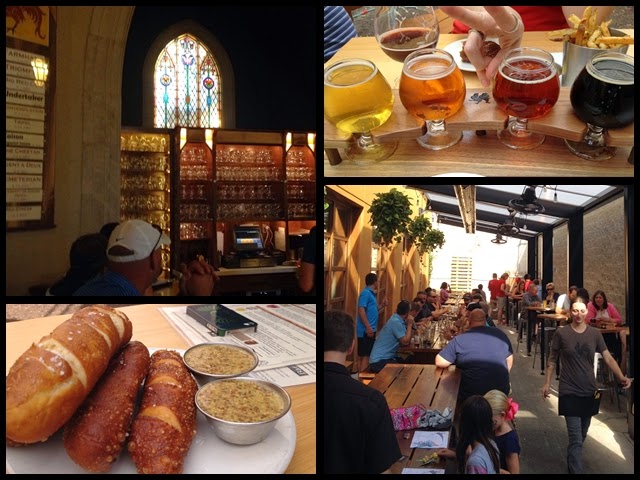 Brewery Vivant - Opened in the unique setting of an abandoned funeral home chapel in December 2010, this Grand Rapids-based craft brewery has made their reputation on various takes of Belgian- and French-styled beers, accompanied by an upscale pub fare menu and anchored by a locally-focused and sustainable practices philosophy.

In this meetup with friends in the area, we opted for appetizers and two separate flights of their beers. Like the menu overall (entrees are in the $10 - $20 range), the appetizers are on the higher price point for pub fare, but you get a little more pizzazz for the money. The garlic & parsley Belgian Frites ($6) came with the requisite mayo-based dips and the Pork Belly Corn Dogs ($9) came with an intriguing rhubarb ketchup and a house-made mustard. Both items were quite tasty and had a little hint of decadence, especially the corn dogs.

Through careful planning, we were able to sample eight of their beers by ordering two separate flights (the Cambier Flight, priced slightly higher than the Vivant Flight, allows you access to most of their current higher gravity brews.) All the beer sampled was at least in the solidly good to grerat range, with the clear winner being Cemetarian (their Undertaker Belgian Dark Ale aged in oak and spiked with vanilla and coffee beans.) Their Agent á Deux, a collaboration beer with local doughnut maker Propaganda, also proved to be an intriguing taste as a dark Belgian ale brewed with currants, vanilla beans and rose petals.

2019 Update: no major changes of note re: social media links.
Posted by Joe